This was one of the webcomics that Psyguy released on his site, back when he was still popular and before it was apparent what a scumbag he was. It originally took me in with a narrative that was gripping to my high school self, but the interest didn't really last all that long. Doing my review of That's My Sonic! reminded me of it, so I decided to take another look at it, and I immediately regretted my decision. 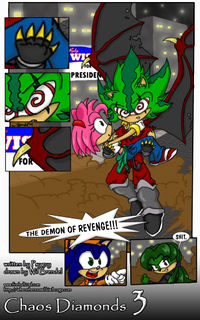 Hey, look! A crappy self-insert Sonic recolor! It's just like Sonichu, but with mall goths!

'Tis another one of those webcomics that was crappy from the get-go, but there were many points at which it kept dragging itself further and further into mediocrity, be it the cliched "Tails fighting Sonic" element that most angsty Sonic fanfics had, the "Tails and Amy are a romantic couple" element that many Sonic fanfics had, the gratuitous cursing (this being before the video game Shadow the Hedgehog made the very thought of a Sonic character swearing worthy of punching puppies), or how Bryon managed to somehow shoehorn his "original characters", including his self-insert Psyguy Psycho, into the story.

Bryon made it plainly obvious from his website that Chaos Diamonds 3 is based on a fanfiction, and it shows!

The comic opens as Tails, Shadow, Amy, and Eggman make off with a Chaos Diamond. As they take off in Tails's plane, they get shot down. Tails has a flashback dream where we learn that after the events of Sonic Adventure 2, Eggman reformed and became a mechanic with Tails and "That's My Sonic!" alumni Apple as his employees, Tails developed feelings for Amy, and Sonic became an actor. Tails asks Amy out on a date, but she declines because she wants to go to Sonic's new film shoot. That night, Tails is greeted by Shadow, who is on the run and shows Tails that he can access the Chaos Emeralds' energy from anywhere. Tails offers to let Shadow be his roommate in exchange for teaching him how to use their power.

The next day, Tails gets a visit from Amy, who has a conspicuous bruise on her cheek. As it turns out, Sonic's an abusive asshole! Shadow heals up Amy's cheek, and Amy and Eggman agree to keep Shadow hidden along with Tails. That night, Sonic visits Tails and asks him if he heard of the Chaos Diamonds, which are basically Chaos Emeralds on steroids. When Tails confronts Sonic about his being a motherfucking cockbuscuit, Sonic almost smacks him like a bitch before Shadow beats him like a ragdoll. Sonic calls in his personal bodyguards, shortly before Tails follows suit and kicks him around like a hacky sack. The cops arrive, and Shadow Chaos Controls himself and Tails away, as the emo OC that would shoot Tails down listens in on a CB radio as the cop calls for backup.

Tails is now wanted for trying to kill Sonic. The crew take off in Tails's plane. Amy reassures Tails on his applying his foot directly to Sonic's face as the OC, revealed as Deathwish, appears on the plane's wings, revealing himself as the one who made Tails a wanted fugitive. The crew plan to clear Tails's name by talking to Ruby Wish, some female presidential candidate, a plan which doesn't work out when she orders their arrests. All four are thrown in jail. Ruby reveals that she has the Chaos Diamond of Revenge, which Sonic told her they stole, and which she uses to kill a prison guard so she can frame Tails. Shadow busts the gang out, and they plan to make a break for Knuckles's floating island, but not before Tails swipes the Diamond and gets it absorbed into his body, which accounts for the events in the prologue.

Fast forward to the present: the gang are now hanging from a building, moments away from execution by means of wrecking ball on live television. Tails confesses his feelings for Amy, which Amy reciprocates. Suddenly, the Diamond in Tails "synthesizes", and Tails turns into Psyguy the Demon of Revenge, Psycho, freeing himself and his friends in the process. Wish reveals herself as Deathwish, and the two go at it. Sonic then holds Amy at gunpoint, and Tails fucking kills Sonic (though not really).

Tails and the others arrive on the floating island as Psyguy Psycho vanishes back into the Diamond. After some emo-babble, Shadow tells the crew about the Chaos Diamonds, of which there are three: Will, Ghost, and Revenge. That night, as Amy and Eggman sleep, Shadow goes into some more emo-babble, Shadow starts training Tails in how to use the Diamond, followed by Tails snogging Amy the following morning. 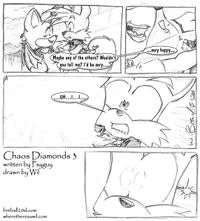 The next day, the crew go to Knuckles (who married Rouge) in his alter. Tails asks Knuckles what he knows about the Chaos Diamonds. Knuckles feigns ignorance as Rouge reports to Wish that they're asking around. As they leave, Rouge, on Wish's orders, starts seducing Tails to get information out of him. Psyguy Psycho partially awakens and Tails starts wailing into Rouge. Knuckles tries to stop him, but Psyguy Psycho finishes awakening. Knuckles reveals he has the Chaos Diamond of Ghost and he and Tails go at it.

Knuckles proceeds to beat Tails like a red-headed stepchild. Psyguy Psycho recalls himself. Shadow tries to stop Knuckles from continuing the beating, but he won't listen, so Shadow intervenes. Tails tries to help, but Psyguy Psycho starts to infect Knuckles. Rouge tries to take Knuckles's power for the Diamond of Will, under Wish's control, but this only serves to piss him off and makes him vaporizes her, which pisses him off even further, like a furry Kratos. Amy joins the fight, awakening her own powers. Psyguy Psycho appears once more, absorbing nearby souls and powers up before finally subduing Knuckles and removing his taint.

The crew pay the Chaotix a visit, and Eggman proceeds to perform some of the most uncomfortably sexual hacking of all time. Some jokes about Shadow's ass and Tails wanting to make a mutant hybrid baby with Amy later, the crew proceed to hatch a plan to defeat Wish.

The final battle is now underway (thank God!). As Eggman storms the building with Metal Sonics, Deathwish makes Eggman her bitch, but Shadow saves them all from certain death by challenging her to fight Tails in a fair duel. Deathwish lays Tails out like a bath mat, taunting him, before Tails starts to lay her out like a bath mat. As it turns out, however, Wish doesn't have the Diamond of Will, but rather, Sonic, who wore a baseball cap to hide the fact this whole time.

Tails tries to talk Sonic out of killing them all painfully, but the Diamond has full control of him. With Tails unable to continue fighting him, Psyguy Psycho returns to Tails's body and the two fuse together. Shadow and Knuckles fight alongside him, but Sonic goes super. Amy joins the fray, and Tails finally beats the Diamond out of Sonic's stupid head. The Diamonds then suddenly yank themselves out of their hosts and go nuclear.

Everyone awakes, Rouge is alive again, Sonic's no longer a shitsock, and this train wreck finally comes to a fucking close.

Chaos Diamonds 3 goes through four different artists over the course of its run (not counting guest artists), starting with TL Welker of "Heartcore", before finally settling on Wil. As such, I'll review each artist individually and briefly before going into the overall aesthetic of the comic.

As for the overall aesthetic of the comic: considering it's drawn by everyone except for Bryon, who can't draw to save his worthless hide, it's probably the best part of this emo-fest. Granted, it's a Sonic fan comic, so hardly anything is original. In fact, some of the character designs for the OCs are quite derivative: Psyguy Psycho is dressed in what looks like DBZ clothing, and Deathwish looks like a furry version of the Joker. 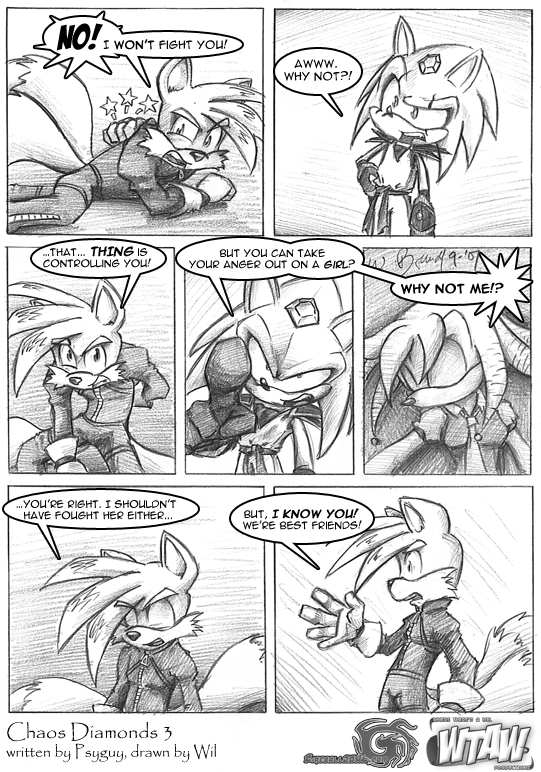 A sad waste of good artwork.

This comic is what happens when you mix Sonic, Dragonball Z, and emo angst in a centrifuge and spill the slurry onto Textpad, then pour that sludge onto a sheet of paper. The battles are pretty clear rip-offs of the kinds of things you would see in DBZ, complete with levitating combatants that fight using energy blasts from their hands, with death being just as cheap in this comic as it is in DBZ, and the whole train wreck of a story being concluded by means of Deus Ex Machina, likely because even Bryon could see how fucking dumb this shit was getting and decided to mercifully end it and spare himself and those around him any further migraines.

There are a few attempts at making humor throughout the comic, but it's no better than the shit in his other "masterpiece".

In addition, on more than one occasion, the author violated the golden rule of comics: "Show, don't tell". Many pages feature rambling expository walls of text, which do little more than disrupt the pacing of this already difficult-to-read shitshow. The fact that a lot of said exposition is emo bullshit helps matters exactly none.

Everything you need to know about Bryon "Psyguy" Beaubien, you can find in the review for That's My Sonic!. Long story short, he's a scumbag and a pedophile.

If this comic is any indication, webcomics and fanfiction should never, ever, ever, FUCKING EVER mix.

There was going to be a sequel. Thank God, Jesus, Buddha, Shrek, and the Flying Spaghetti Monster that it never happened.

UPDATE: This webcomic is gone like his others are.