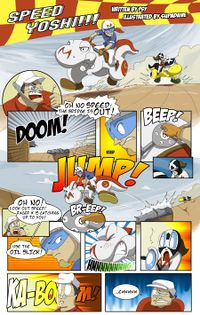 Not even one page in, one fucking page, and already with the pop culture references and poop jokes? We're already off to a positively sterling start!

This comic came out well after I had outgrown being a fan of Bryon Beaubien, which, in retrospect, I'm now quite thankful for. Diving back into the Wayback Machine to drudge up this piece of shit has been the most difficult thing I've ever had to drive myself to do, but for good reason: despite looking decent, this is actually the absolute worst comic ever made by Bryon, and thankfully due to his pulling all of his sites off the internet, his last.

Without any further delaying of the inevitable, let's get into it.

As with all Fireball20XL comics that Bryon had a hand in creating, this was bad from the word "go". The point at which the comic hits rock bottom, though, is when Bryon takes Amber, a character created by another author and turns her into the butt of sexism jokes, and continued to do so well after her creator disassociated himself with Bryon and went on to bigger and better things, like Skullgirls and Bee & Puppycat. 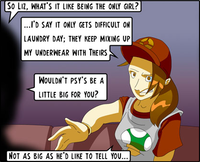 This is Liz. Don't get used to her: she and the other female cast members are eventually replaced with some purple-haired big-chested mute bimbo.

There is no continuity: Bryon finally embraced the fact that he can't write much better than he can draw and went with gag-a-day comics. You would think that this would make this an improvement over his previous works, but alas, it's still shit. Humor is centered around things in video games that Bryon thinks are amusing, but they're either things that have been played out, pop culture reference-laden horseshit the likes of which we got sick and tired of after Family Guy, or fresh new attempts at humor that come out as fresh new lawn biscuits.

The least terrible part of this comic is the fact that Bryon didn't draw it himself. Thank god for that: if he did try to do it himself, we would be dealing with something that would rival Sonichu for worst webcomic in the history of mankind. Dave Smith's art, while nothing that will blow anyone out of the water, is not terrible to look at.

Of course, all of that is ruined by the fact that it stars Bryon's ugly mug. 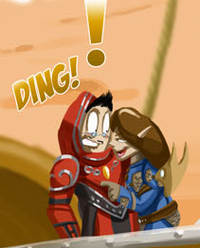 Keep it in your codpiece, pal.

Most people get better with experience. Bryon Beaubien started GG-Guys about eight years after That's My Sonic!, but against all odds, seems to have gotten worse. This comic hits all the low points when it comes to humor: tried-and-true "LOL RANDUM" jokes, dick jokes, poop jokes, pedophilia jokes, sex jokes, sexism jokes, oh dear GOD the sexism jokes!

The comic consists of three regulars: Psy, the author, "LOL RANDUM" master, and douchestache aficionado; Dave, his beleaguered artist and manservant: and a female character. This comic goes through female regular cast members like a Taco Bell patron goes through toilet paper and Pepto Bismol. That's because each one of them was a girlfriend of Bryon's at the time, starting with Liz, who eventually left Bryon for someone not so scummy. After Liz bailed, she was replaced with Shannon, the girl who was 13 when Bryon first approached her and started grooming her, and who would eventually not only dump him, but kick off the callout movement that would see this comic pulled from the net. During this time, all instances of Liz's face had the face of Abraham Lincoln shooped over them. Classy.

Eventually, Bryon ran out of girls to victimize, which left him with no choice but to invent a female character for this comic. Sadly, it's a well-established fact that Bryon doesn't have an original bone in his body, so he stole a character: Amber, created by Cory "Sprite37" Holmes and was first made for a story he (Cory) was working on, and the saddest character in this whole comic. While the other female characters in this mess had (a very thin sliver of) personality and actually spoke, Amber serves no purpose but to play the silent, personality-void butt of Bryon and Dave's jokes about women, sex, and sexism.

For Bryon, I direct you to the bio in the review for That's My Sonic!. The laconic version is basically that he's an abusive asshole and a possible pedophile.

As for Dave Smith: he has been a long-time artist and collaborator for Bryon, during which time he has picked up many of his bad habits, including a hankering for jailbait. While his rap sheet isn't as long and mind-boggling as Bryon's, he also courted/groomed/abused the aforementioned Shannon, who was only 15 when he pursued her, also known as "still well below the age of consent for some creepy-ass grown man like Dave". During the callout movement against Bryon, mention was also made of Dave's misdeeds. Whereas Bryon decided to turn tail, pull the plug on his site and online presence, and hide; Dave has elected to instead silence everyone who mentions his sins on his deviantArt page and threatening legal action. His threats to sue his victims pretty much amounted to nothing but hot air, however, when it was later revealed the lawyer he hired would not pursue the case, mainly because A) to prove a case of libel and slander, one would have to prove the allegations raised against him were knowingly false for the intent of damaging his reputation (they are not false), which means B) the lawyer knows better than to pursue a case he knows he can't win.

I've done it! I've hit the absolute rock bottom of webcomics! This comic was born of the shittiest, lowest common denominator humor you can find, and after reading through this comic to do research for this review, I have grown to hate everyone and everything!