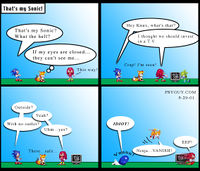 All those shitty sprite comics that pollute the internet? This is the first. Now you know who to blame.

Oh. My. God. If there was ever a comic that was just begging to be put on this wiki, this is it! That this wiki has existed for so long without any mention of this comic, or of its author, a genuine waste of flesh, is unfathomable.

I believe I'm not alone when I say that, once upon a time, I was a big fan of this comic. Many Sonic fans were. This was during a time when the internet was still fairly young, as was the majority of the comic's readers. Among Sonic fans, the author, Psyguy, was quite a bit older, so he was like the cool big brother of the Sonic fanbase, someone to look up to. Of course, most people eventually age out of the fandom and this comic's rather juvenile humor. Not helping matters is the author himself, but I digress: let's give this comic the ass-tearing it rightfully deserves.

It's pretty hard to determine where the comic's downfall began, considering the whole damn thing is shitty, so for the sake of convenience, let's just say the downfall began the minute the author got his hands on Photoshop. 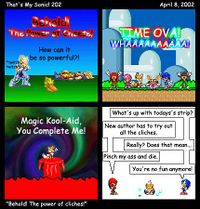 Everything you could ever need to know about TMS.

Wading through the pages of the comic has proven to be taxing on the reviewer's psyche, but here's what we've got.

After a few pages of "random" humor, Sonic, Tails, and Knuckles end up in a house floating in the ocean, joined by Shadow shortly thereafter. It is soon established that Sonic is a predatory gay man with pedophile tendencies (hence his preferring Tails's company to Amy's) and Tails likes to drink the hallucinogenic "magic kool-aid".

After the "zany" cast of TMS is established there really is no plot to speak of. For quite a while after the whole "house in the middle of the ocean" bit, any semblance of a coherent and consistent plot is thrown out the window and shat on. The "story" amounts to little more than "random" bits of "humor", non-sequiters, one-off "jokes", and Bryon's tried-and-true cracks about Sonic diddling Tails while Tails drowns his troubles in psychoactive beverages, interspersed with Bryon phoning in his comics due to being side-tracked by video games and shit. Eventually, Apple and Orange try to summon a god of destruction (which happens to be a giant 8-bit Princess Peach), then more dumb shit before Sonic and company fight their recolored counterparts in the pages leading up to page 100.

After hitting the 100 page "hallmark", it's back to business as usual: random humor in abundance. Sephiroth joins the party and gets Edd to get him a catgirl girlfriend, Bean and Nack are joined by Goku and a Toad named Luptor, Goku and Sephiroth fight, then Sonic and Tails run through stages from Sonic the Hedgehog 2 (with the backgrounds replaced with those from Mario games because...lol random bullshit or whatever, it hurts to think about it), then Sonic and Knuckles get thrown into some reality show with Smash Bros. characters. After more random horse manure, Sonic and Knuckles fight Protoman and Bass.

The original comics that were released after page 200 have, unfortunately (...scratch that, "fortunately") been lost to the sands of time. There are a series of comics made afterwards by another author, but truth be told, it's pretty much business as usual.

The thing to take home from all of this is that That's My Sonic! has no consistent plot to speak of: it consists mostly of "random" jokes and unrelated plotlings unified by running gags of Sonic molesting Tails and Tails taking drugs.

What art? It's a sprite comic! In fact, it's one of the first sprite comics ever made, and the one that popularized the wretched format. For every terrible sprite comic that has appeared on the internet, you have this one to thank for the others' authors adopting the format themselves.

Nope, not a rip-off of some obscure character from a forgotten Dreamcast game, no clue what you're talking about, you shut your whore mouth.

But even among sprite comics, it's pretty shitty-looking, even as one of the forerunners of the format. What backgrounds were not taken from games looks like a beginner's attempt at making backgrounds in Photoshop, if that beginner was drunk and on meth. The original characters are all lazy edits of sprites from Sonic games (Oh, goody! Sonic recolors, everyone's favorite indicator of creative bankruptcy!) and Mega Man 8, but special mention should go to Yoshi / Bryon, a self-insert from the author's failed attempt at a hand-drawn comic called "Dirty Power" that is a blatant rip-off of Might from the obscure fighting game Psychic Force 2 (released on Dreamcast as Psychic Force 2012). When making interesting character designs proves too hard, one can always count on tracing characters from a video game no one's ever heard of, right?

...then again, it may be just as well that he uses sprites instead of drawing... 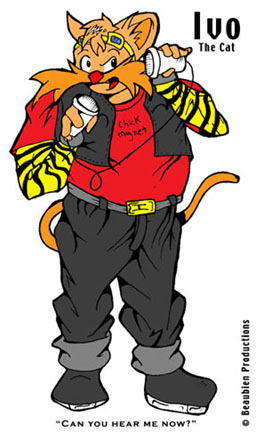 I could go into a tangent about how shitty this comic is for the "Sonic is a gay pedo" meme, but if I do that, I'm gonna have an anger stroke. Instead, I'll just say that the comic was written with the sense of humor of a man who thinks making fun of gays and pedophiles is comedy gold and who is an adherent to the "LOL RANDUM" school of humor. 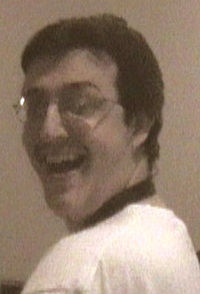 Bryon Beaubien, better known by his online handle "Psyguy", was the webmaster of Fireball20XL, the home of That's My Sonic! along with other projects he has worked on, in addition to comics made by various associates and a podcast named "Wha-Chow", which basically boils down to Bryon and company either shouting incoherent bullshit over one another or shitting on Bryon's exes.

Oh, did I not mention the exes? 'Cause there are legions of them, and that's where shit starts really hitting the fan. Bryon's "romantic" exploits are practically the stuff of legends: the number of internet girlfriends he's had over the years is ridiculous, with many of those girlfriends also being comic authors from his site. There's a good reason why they're all exes, too: because when it comes to relationships, Bryon is pretty much the internet equivalent of a wife-beater. He has, on numerous occasions, insulted and belittled them, called them all sorts of unsavory epithets, gaslighted them, tormented them emotionally and psychologically, and when they finally work up the courage to dump his ass, turn his associates and new girlfriend against them.

All this would make for a shitty person in general, but what elevates Bryon to the level of "irredeemable smeg-stain" is the fact that he likes them young! The majority of his exes were in their early-to-mid teens when he (a grown-ass man) approached them, with one recent victim being 13 when he first made contact with her. He groomed each girl he courted, cybered with them, and made it clear that were they ever to meet in the real world, he would have no reservations about fucking them, even if it could land him in prison to get a taste of his own medicine from some muscular cellmate.

Eventually, all of these victims got together to finally call Bryon out on his bullshit. What followed was some of the most hilariously inept attempts at damage control one could ever witness, from a half-assed apology where he claimed he never touched a minor (the only true thing he said on the matter, though not for a lack of trying), to threatening detractors into silence (a favored tactic of his even before his exes fought back), and eventually pulling the plug on everything and eliminating all traces of his online presence.

Thank goodness for the Wayback Machine.

He has since made an attempt to weasel his way back into the spotlight on Youtube under the name of "BitPolarGame", but no one's buying it. He also made another twitter called "@CricketCrumpet" the same day he said he would leave the internet: he has an even worse track record of keeping his promises to leave and never come back than Chris-Chan. He's also started posting art on dA again, once as "Kowaretan", then again as "Peter Brock" under the username of "chwdwn". Both times, his attempts to reel in young girls, combined with his emblematically shitty art style, gave him away. This pattern of behavior is likely to continue until someone either brings him to court on charges of "corruption of a minor", or beats the shit out of him.

There's a special place in hell awaiting Bryon Beaubien for the sins he committed against comics with this abomination.