Reaction to this comic - Part one

I know I can’t speak for everyone, but I’m getting bloody tired of fanservice in media. I find it rather useful for drawing reference but everyone is growing increasingly reliant on it. The comic book industry, especially the American one, is guilty of this. I got so bored of it that I think I’m turning asexual.

Wait, put away the bile umbrella my dear reader. I’m not going into a detailed rant on why I hate how the western comics use fanservice. I am however, taking the time to criticize a particular webcomic that relies on fanservice.

It was bad from the get-go but at one point a fight scene starts and keeps going for about two years.

I’ll keep this short and try avoid spoilers. Still, some are necessary or you’ll get lost. In this story, demons eat the essence of living creatures called ‘heartcore’. Going by the story, it seems that heartcore from any living creature is edible though they prefer human judging by Amethyst's reaction when she found out that she was eating the heartcores of mice. Heartcore is also vital for demons, since there are only two ways to kill a demon: either destroy their head or rip out the heartcore and the latter is said to be easier. In addition, reincarnation for demon is possible if their heartcore remains intact after death. 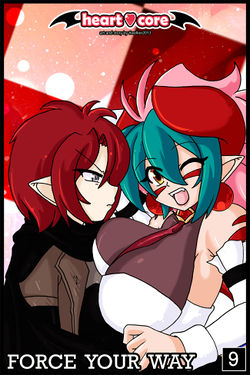 The comic in a nutshell... No one has breasts smaller than a double E cup.

The story follows Amethyst “Ame” Lashiec, a princess of a demonic realm in Hell called Asgar. She starts out as a sweet and demure princess but a key event in her life turned her into a rebellious action girl. Even before I started reading, I could correctly guess that Amethyst is a succubus just by glancing at the cover art. Anyway, Amethyst grew disdainful of her father's actions and decisions since the end of the Demon-Beastmen war. Fed up, Royce the Demon King (her father) finally stripped Amethyst of her rank and inheritance by asking one of the Fiendlord (demonic nobility) to put some kind of confusion spell on her so she blurted out something about not killing people which somehow in the demon world makes her worthy of execution. And just to be a complete dick-piston, Royce also promised the throne to any Fiendlord that could bring Amethyst's head to him. I suppose it’s justified somewhat, since Amethyst will try to overthrow him. However, I think she has a good reason to since Royce tortured her before nearly killing her sister.

There is more to the plot but none of it matter because none of it is interesting. It's just a bunch of internal mythology and world building for a world populated by characters you couldn't care less about. And even that is only there to serve as a string between one gratuitous boob shot and the next.

The art of Heartcore is pretty, if a little manic when it comes to color at a first glance. For people who want their comic a bit heavy on the fan-service side, you are in luck since this one is certainly well served on the T&A department. However, this is what’s called ‘damning with faint praise’. Once you strip away all the garish flash and color, you will see the comic's worst flaw: bubble boobies.

Let me ask you Ms Welker-Stewart; do you know of this little thing known as ‘Gravity’? You know, one of those Four Fundamental Force that holds the universe together? Breasts in this comic stay nicely round no matter the position. Also, the size of the breast can get rather absurd. I’m not going to rip on it for too long since I myself is still learning on how to draw women, but let me direct you to these excellent tutorials on how to draw good breasts. 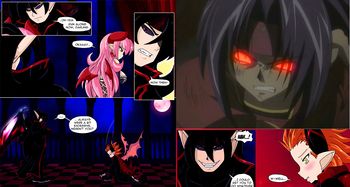 Heartcore - Come for the bubble tits, stay for the original characters.

Another problem is how ill-fitting the art style is. The drawings are wonky, cartoonish, simplistic and anime inspired. The colors are insanely bright, the facial expressions are exaggerated anime faces and the tone of the art (and the writing for that matter) is often amazingly lighthearted without regard for what is actually going on at that moment. For a comic that revolves around treachery, murder, betrayal and torture, the art style looks more like that of a children's cartoon. It's hard to take an assassination plot seriously when the demon king who is trying to kill his daughter looks more like her brother and both look like they are twelve years old at the most (if you ignore her DD tits.)

Other than that, I couldn't point out any other thing that really sat wrong with me, though there are still a lot of minor flaws that bother me. I think that the kinetic linking in some action scenes is amazingly weak, making it impossible to understand what is going on in them or get excited about them. Which is a major problem because 90% of the comic so far has been never-ending fight scenes. The effort Ms Welker-Stewart put into her work goes to the technical side (color, layout, background, effect, etc) but not enough toward the basics (anatomy, scale, consistency.) The end result is that everyone's body is wonky and blobby instead of curvy like she was trying to draw. I mentioned in my Guild Adventure review that I’m okay with manga/anime-based style. However, I must clarify that one should not aim to merely copy (like so many Hetalia fans do) but use the technical and theoretical skills acquired along the way to create a signature art style that will differentiate you from the countless hacks that infest the internet. I’m only talking about this because Heartcore’s art style is so derivative that I immediately forgot it the moment I saw a clip of low-budget anime on YouTube because they mesh together in my head like a big ball of mediocrity. In fact, I am almost sure that at least the main character's design is stolen from some 2D fighting game but I can't remember its name at the moment (10 points to anyone who tells me.)

In conclusion, I am not saying Welker-Stewart is the worst artist. I just think her style is too average and unpolished. In addition, I feel that the bright colors make the characters look plastic. Personally, I found this particular feature to be irritating because it makes the characters look artificial. I feel like I’m reading a comic about a bunch of action figures with the personality of a tree stump with the paper cutout of Kristen Stewart nailed to it instead of a group of fully fleshed people/demons. 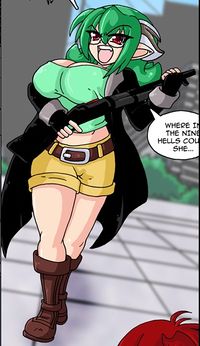 I counted ten things wrong with this picture. How many can you find?

I also have trouble with Royce as an antagonist. This is a personal gripe but I feel that he’s too evil. The story synopsis tries to paint the webcomic as a battle between “Grey” and “Black” morality but Ame is a white sheet with a few unfortunate ketchup stains on the corner when compared to Royce. Unless being a whore and sexually harassing small children counts as being evil, because she does that all the time.

So the writing isn't offensive in any way. It's just incompetent.

According to the cast page and the immensely helpful tvtropes page, the author derived characters of this comic from real-life people. However, I have yet to see any ego-rubs common to works containing characters derived from real-life people. Tara has not kicked up any storms as well and seems to be a rather decent person judging by how she interacts with her fans on her Deviantart page.

I didn't dig too deep, but her comic doesn't seem to indicate an abrasive personality, so I don't feel the need to. At worse she might be a bit of a weeaboo fangirl but that isn't a cardinal sin. It is also possible she has a fetish for oversized tits (NSFW) judging from her DA account but I don't know how much of that was done of her own will and how much is commissions.

Heartcore isn’t the worst fan-service comic I ever saw and I rank it amongst my top 20 ‘Most Forgettable Webcomic’. Although it can be as blatant as the likes of Las Lindas, at least it pretends to want to tell a story and not just draw tits. That is more than most comics of this sort are willing to do. Honestly, I don't even understand what all this fanservice is for. Either Tara is gay, or she just watched so much anime that she thinks this kind of stuff is a requirement.

I think Ms Welker-Stewart would be better off doing some other comic rather than this one. If she ever came into this, I suggest that she get someone else to write the story for her.

Before I finish however, I want to close this review with some words of kindness. I do not agree with the view that manga and anime is detrimental for the youth. In fact, I support them because it is inspiring them to pick up a pencil and start drawing. It also introduces them to new ideas that can serve as an ignition spark to get their creativity burning. That’s a good start no matter what path you choose, be it a comic artist or a writer.

However, if this kind of comic is what it inspires you to make, maybe it's time to put the pencil back down.