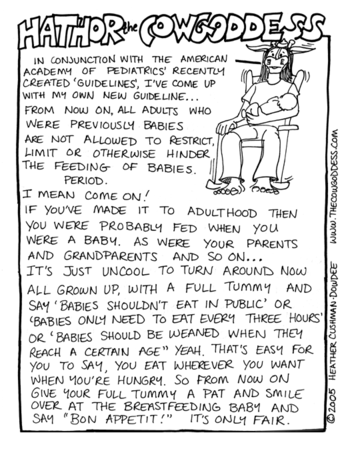 Because in the 1950s, everyone breastfed in public.

I was introduced to this webcomic via an article on Cracked.com. I assumed that it was a parody webcomic and that there's no way someone could possibly be that dense. A few images later proved that the webcomic was all too real.

When did this start failing? Since early images from the webcomic seem to be mostly unavailable on the home website, I'm going to guess that it started failing from the moment Hathor started.

Hathor's main drive is to force her viewpoints onto other people. Of these viewpoints, the most vocal ones concern her children and breastfeeding. Tolerance is only broached when it concerns her own actions and beliefs, not the actions or beliefs of others.

The art is pretty mediocre. It's not as bad as half of the terrible anime-inspired comics out there, which is a bonus. However, anyone other than the main character herself is generally drawn in as a nondescript human being. The art has improved over the years, but when your artwork looks like something a middle school art class could crank out in fifteen minutes, that's not saying much.

After a while of following the Hathor strips, I came to the conclusion that there was no storyline; just repetitive statements about how we should close all of the schools and all have our babies at home. If I sound like a broken record at this point talking about how the webcomic is all about Hathor's beliefs and how we should all bend to her will, then guess what, this is what you can expect from the webcomic. Anything that isn't about Hathor's beliefs and can appeal to a broad audience is a rare strip indeed. And even then it isn't entirely opinion-free. 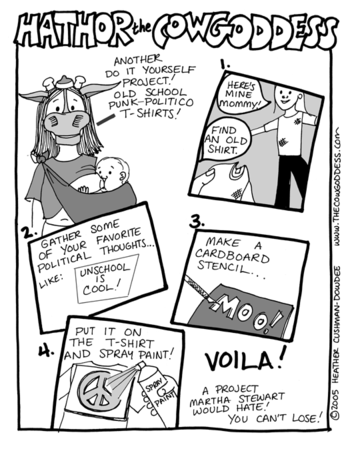 Can't you just smell the tolerance? Neither can I.

Heather Cushman-Dowdee spends much of her time producing art in the tone of Hathor as well as going to various protests and fundraisers about her various beliefs. She's also big on putting breast milk into her dishes, as evidenced by her breastmilkbread baking for one of her fundraisers. She also didn't wean her first two children until they were about three years old and let her third kid breastfeed until she was four.

She's also a big fan of unschooling, which, as pointed out in the ratings summary above, consists of keeping the child at home and learning through a strange variation of homeschooling where the child learns from the world around them. Ideally, this would have the child being exposed to various new and interesting things not offered in school. Realistically, this means that the child will almost certainly not learn things they normally would in school. Oh, and some unschooling means that the kids won't get a diploma, so it won't seem like such a great idea when the kid won't be able to get a non-wage slave job when they grow up.

Now you may be thinking, "How crazy is this woman?" You know those pictures where Hathor militantly enforces her opinions on the masses and allows no dissenting viewpoints? In a mothering chat in 2006, Cushman-Dowdee stated that amongst her group of mothers she is actually one of the milder ones, and that she endorses laying her webcomics around in a manner similar to how people lay around Jack Chick pamphlets (Jack Chick and Hathor the Cow Goddess- isn't that a cage match you'd love to see?). Let's also not forget that Cushman-Dowdee also tries to claim that C-sections are linked to violence rates.

She's also fond of claiming how great things were in the past when women constantly had home births, breastfed with impunity and taught everything to their children at home. I'm guessing that she's also overlooking the fact that with those home births also came extremely high death rates for both women and children. Oh, and also that the sum of what most children were taught comprised of "women cook and obey their men" as well as "men control women and learn a trade". Plus the bonus fun of most girls being married and pregnant by the age of fourteen. And let's not forget that back then, showing some ankle was considered to be an extremely sensual thing, so the likelihood of women being able to whip out their breasts in the early 1900s or sit down and breastfeed in the market square during the 1700-1800s was pretty slim. Reeeaaaallly slim (and the only ones who did show substantial cleavage at all were usually courtesans, looney ladies or out-and-out prostitutes).

In other chats, Hathor encourages mothers to give their six-year-old children wood, hammers, and nails, encourages her fans to gang up on a dissenting poster, claims that being a doctor automatically makes you a bad parent, admits that one of her daughters didn't learn how to read until she was eight years old due to "unschooling", scoffs at doctors who classify certain pregnancies as "high risk" and recommends firing them, blames mental retardation on vaccinations (and here I thought it was all genetic-- thanks Hathor!), reveals that everyone in her family sleeps in the same bed (inspiring the webcomics Why Daddy's Protruding, Moaning Doesn't Mean Mommy is in Pain, and Daddy Likes to Breastfeed Too!), hints that her utilization of unschooling may be due to laziness, and shows admiration that a sixteen-year-old would drop out of high school in order to travel the road with his father.

And if all that bundle of crazy and delusions weren't bad enough, Cushman-Dowdee also does performance art where she includes her own breast milk.

The Rush Limbaugh of liberal webcomics, Hathor's main audience will be mostly women similar to the author, and women or men who believe that whipping their breasts out in any public space should be encouraged and tolerated (this does not include the lactating fetish crowd or Girls Gone Wild film crew).