Immelmann had already created a webcomic that was not only terrible enough to be listed on the Bad Webcomics Wiki, but hideous enough to even receive an Atomic Bomb rating. Here is another webcomic of his; is it just as bad?

Not applicable, as this is a gag-a-day webcomic with a few story arcs, but no overall story line.

I shall begin this part by posting an excerpt from the "Art Review" section of Concession:

"The main problem with Immelmann's shoddy art is how it stinks of laziness. Look at these fucking characters. Look at how they are drawn. And remind yourself that these characters are each meant to be different species from each other. Are you getting my point yet? Let me help you get my point.

Goodness look at all these animals, all so varied with their different bone structures and things. Look at how the little mousey's nose points down, or the funny shape of the pangolin's head, or differences between their eyes and ears and things. Look at the badass claws on that motherfucker on the right. Surely all these drastically different looking animals would make a varied and creative cast of characters if you were to draw them together.

Immelmann... if you can't be bothered to draw animals, don't do a fucking half-assed job. What is this shit? Your mice can hardly be told apart from your fucking cats, and your cats look like stripy wolves. Have you ever actually looked at an animal? Because now I'm genuinely in doubt. Immelmann was actually called out on this on his forum, and this was the reply; 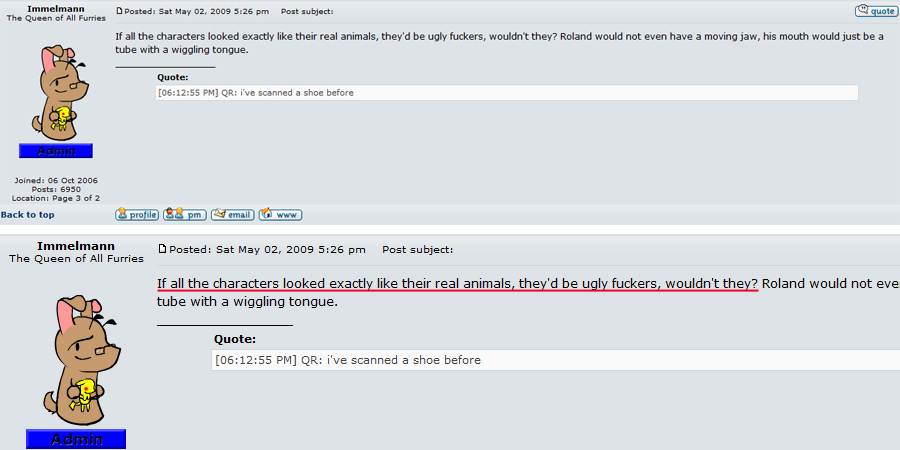 Drawing anthropomorphic animals... to look like animals... would make them too ugly.

Working with animal characters gives you the exciting opportunity to experiment with different body types, bone structures, anatomies, attitudes... and somehow Immelmann makes every animal the fucking same. Each muzzle is an awkwardly-shaped wonky rectangle jutting from the front of the face; each eye is a big white square with a tiny pupil, slapped randomly onto the side of the head; each ear is allowed to wander around the top of the head wherever it likes. And yet somehow he thinks this makes them prettier than their original, more imaginative designs?! Immelmann seems to think that giving something the colours of a tiger makes it a tiger, even if it has dog ears and the nose of a smurf."

Ballerina Mafia was begun around the time Immelmann concluded Concession, but he used the same crappy art style in this webcomic as he did in his prior one, the only difference is that he added some humans into this one. And here's proof: 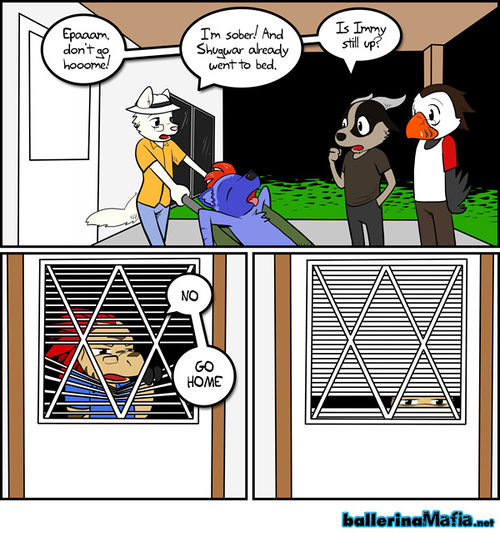 Immy's been cartooning for eight years and this is the best he can come up with?

Then again, Ballerina Mafia sucks otherwise, so I can see why Immelmann wouldn't bother putting much effort into the drawings either.

The very first strip not only is unfunny, it doesn't even make sense. Then comes a second one which at least makes sense but is still unfunny, followed by a third unfunny gag, then a fourth...

Holy One Frame Gags! Even Concession had a funny strip or two! But this webcomic, which is supposed to be a broad comedy, has what look like in-jokes which most people (certainly not me) wouldn't get. So I kept going...

There are jokes such as Jesus Christ being black because that's what the Bible says (oh please), jokes based on incidents in Immelmann's life, references to the now-defunct Concession webcomic, soapboxing, video game jokes, and just plain random jokes.

Unfortunately not a single strip I saw made me laugh or even smile.

Immelmann describes himself and his comic right here.

Here is what Immelmann says about Ballerina Mafia:

"This is essentially meant to be the opposite of Concession, which wound up being a serious drama comic with long-running plots and very controversial subject matter. Ballerina Mafia certainly wont' be kid-friendly, but I'll be avoiding some of the subjects that would make a lot of people uncomfortable."

Immelmann may have (mostly) eschewed controversial subject matter in this webcomic, but he also eschewed any real attempt to make it funny. As mentioned above, there's plenty of in-jokes or just plain random jokes, but no genuinely funny jokes. Yet Immelmann has indicated that people were donating no small amount of money to him for his making strips for this webcomic. Well, other bad webcomic artists have been asking for, and receiving, money for their bad webcomics-or even making promises to create more webcomics and not following through on them (*cough*Aaron Diaz*cough*). I suppose Immy deserves credit for actually keeping his word. Unless people were paying him off to stop drawing this thing, and he got the wrong idea.

Ballerina Mafia is not a sick perverted monstrosity like Concession, but is merely badly-drawn and unfunny. Obviously it still earned a listing on the BWW. Too bad that Immy wasted such a cool title.