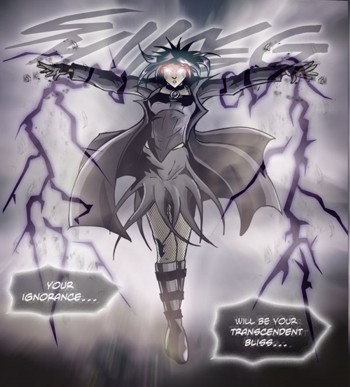 For all the many kinds of comics on the web, action comics are not nearly common as one would think. Action movies are among the highest grossing films in the industry and action comics in print are also the highest sellers in the comic industry, so along that logic, it makes sense that there would be a lot of action webcomics vying for the highest ad revenue and merchandise dollars, but this is not so. Action stories, though popular and very prevalent in entertainment, are actually not common in webcomics because they are very hard to pull off effectively. For any given action sequence, an artist must be able to demonstrate effective knowledge of dynamic anatomy, knowledge of weaponry or martial arts, and fight coordination. And that's just for a fight sequence. In order to string together a story rife with action, a writer would have to be able to walk the fine line between exposition and action. Again, a difficult task. It's no wonder that entire teams are necessary to pull off a decent action movie or comic, but every so often a creator comes along who can pull off both the artwork and the writing required to make a good action piece.

Juno Blair B. is not one of those creators.

Star Cross'd Destiny is an action piece set in a futuristic New Orleans that follows five young people gifted with super elemental powers, but at the cost of their families and their lives as they knew it. The premise isn't bad, if not somewhat derivative of X-Men. In the right hands, the concept could be done justice. However, Juno Blair B. cocks it up, centering the story around her Mary Sue self-insert, making all the other characters as flat as a sheet of paper, and throwing in lots and lots of special effects to cover up her crappy artwork. JBB makes a lot of rookie mistakes, and the fact that what we're looking at is a reboot is all the more alarming.

Star Cross'd Destiny is a failed attempt at an action comic, and the very reason why creators don't chance doing them.

Oh, this thing sucks right out the gate. In the very beginning of the story, we are treated to words on a screen, paired with filtered Google Image search images and crappy animu art. From there, what should be a plot is replaced by a string of excuses for JBB's character, Juno, to show off what a bad ass/bitch she is.

For readers who know what "star-crossed" means, this will suck as soon as they see the title. Star-crossed an antiquated term we've replaced with the word "doomed". So the name of this thing minus the pretentiousness is Doomed Destiny, which is kind of like calling it "Ill-Fated Fate", "Unfortunate Misfortune", or "Ninja Assassin". It's horribly redundant.

In order to understand how absurd the plot is, let's do a play-by-play of the story point by point:

And now for the best part. All that above is about 170 pages worth of material, and once it concludes, we get this happy message from the author. That's right. "Those other pages I did? That was all a lead in to the real story. I just wasted a couple hours of your life and you'll never get them back. KTHXBAI!"

What a fucking slap in the face.

I could go on to summarize what happens in the second volume, but is there any point? This woman just takes two hours of the reader's existence with her first "volume" of her stupid story and then negates the whole thing with that "now the real story begins" crap. Here's a thought. Why not summarize all that bullshit first volume in a solid 8 or 12 pages and then get the readers to the real story? I'm certain I didn't need to read the ENTIRE first volume to be able to follow volume 2. It's okay for a writer to start in the middle of a story and then backfill readers as they go along. For comics, this is actually a better story-telling method than the traditional 200 pages of droning in the beginning to get the "real" story started that's so prevalent in other media. This is the first critical demonstration of JBB's failure as a writer, but it won't be the last.

The art is bad. Nearly every single page is comprised of weak animu art paired with filtered Google Image Search backgrounds. Dear, God I wish I was kidding. Only in volume 2 does JBB begin to actually draw backgrounds for herself, but even then old habits die hard (or in her case, not at all). Her character anatomy fails for its slavish adherence to animu style, and ridiculous proportions. None of the characters have eyes or hair that exist in reality, or even look good in a stylistic sense. I feel like I'm watching an episode of Yugi-Oh! Except with more swearing and brooding.

JBB, as a Sailor Moon fan, made us wonder whether she plagiarizes designs from animes she likes. The main character shares some basic concepts from one character from Sailor Moon. More accurately speaking, from sailor Juno. Suspicious enough? Judge by yourselves...

Although she might look suspiciously similar to sailor Juno, a little research on JBB found that her looks are pretty much like the ones of her main character. This alone doesn't add up to any possible claim for plagiarism. However, this alone also strengthens the argument of this to be an author's self insert. Again, judge by yourselves.

In order to make up for her terrible artwork, JBB decides to fill up the screen with as many special effects as possible at any given opportunity. Oh, and they don't start out pretty, either. Most of Shades' plasma effects come off as really cheesy solar flare effects, and Pike's "energy effect" is positively laughable. Towards the end of volume 1 and leading into volume 2, the special effects get better, but seizure-inducing light effects do not make up for the lazy lack of background work and crappy animu art.

Also, the artwork has a tendency to go from full color to black and white for fucking reason whatsoever.

Overall, the art goes from shitty animu art with plagiarized background photos to a pale imitation of Shadow Girls. Ultimately, the art never reaches a quality that could be considered "great."

As lackluster as the artwork is, the writing eclipses it by a mile. I already went over how this story basically has no plot. Every scene is just one reason after another for JBB's self-insert, Raiko Mijunkuro aka Juno, to showcase her MAD SKILLZ. Lightning bolts, kicks to the face, and extreme sulking are all in Juno's favorite weapons to use on her enemies, but she's just as bad to her friends. One wonders why these people bother to keep her around in spite of her being such a bitch, but I know why. Juno is a MARY SUE. And a weeaboo (seriously, how many Japanese people are walking around New Orleans?). A Mary Sue-aboo. Juno's castmates put up with her because it pleases JBB for this to be. JBB has created a magical world where her self-insert can pretty much say and do whatever she wants and not be held accountable to her friends. The only condemnation Juno receives is when she is captured by the police and imprisoned, but even then a magical joker man appears and springs Juno from the joint. And of course, the police are the bad guys for wanting to arrest her. The big, bad police chief has a grudge against Juno, for killing his son, but of course it's not her fault because it was out of self defense. The son was an attempted rapist, so he got what he deserved (in JBB's mind). Now, don't get me wrong. I have nothing against rapists getting punished for their crimes, but the attempted rape thing seems like a cheap ploy on JBB's part. A good writer would have shown that perhaps Juno actually DOES have something to answer for, and that not all cops are corrupt. Given Juno's dealings with mafiosos and illegal street racing, it makes sense that the authorities would be interested in her for more than killing the police chief's son. But, no, the police are turned into straw men for Juno to rage against because sticking it to the man is part and partial of the bad ass cliche. In JBB's twisted world view, her self-insert is untouchable and can do no wrong.

Framing up Mary Sue-aboo are her stupid friends. I'd go into each one in detail, but who cares? They either play as straw men for Juno to rail against, or reward her for her lousy behavior. That's pretty much it. Oh, and theirs is a friendship that is bound by walls of text. Lots of walls of text. (JBB sucks at exposition.)

I still think the worst thing of all the writing is page 169's proclamation of "now the story can begin!" That shows a complete inexperience at timing. Webcomickers, hell, comickers of any medium, you do not make the reader read a prologue that's 168 pages long if it's not "the real story." If that's the "real story" then why the fuck am I not reading it from the beginning? A prologue is something that should set up the story quickly and not take up 2 HOURS OF YOUR READERS' TIME! And bear in mind, this is a reboot, meaning there was some incarnation of this comic that existed before this that was even worse. It also means that in 6 years of JBB working on this comic, she hasn't learned a damn thing about how to do it right. And that's just awful.

Juno Blair B. is a bad ass car racer who lives in Kentucky or Tennessee or whatever and really wants you to know all about her life story. She is very dedicated to her comic, having worked on it for the better part of six years, but she's not just a one trick pony. Oh no. She's also in a band. And runs a studio. And goes to school. And is a telemarketer. Or something. I don't know. Does it really matter?

If her self-insert is any indication, she is a psychotic, murderous bitch constantly on the run from the cops (who are just hot for her bod) and she shoots lightning bolts from her eyeballs. Oh, yeah, and she likes Sailor Moon.

Star Cross'd Destiny is a crappy webcomic. The artwork is lazy, and the character designs are uninspired, and the what little plot it has is dedicated to constantly glorifying Juno Blair B.'s insufferable self-insert. If you want a decent action webcomic with edgy magic and violence, you could do a lot better than this.

UPDATE: The website is gone, and the destiny for this webcomic is oblivion.