Nikki Sprite was in the to-be-reviewed section of the BWW forum. Easy to see why.

Chapter One: A Faery Big Surprise

The story involves three female college roommates, beginning with Nikki finding herself in some sort of fantasy world...but it was just a dream...or so she had thought. Then there is an Inspector Clouseau and Kato scene (the originals were much better). Then Ashley arrives and annoys the others away. (Jesus, at least Sabrina Skunk had the backbone to do this when she was sexually harassed by her boss.)

Nikki is now in the library and falls asleep while there...and then a strange man comes by. (What happened to campus security? And I thought that the college in The End Of Things was badly run!) Nikki wakes up...or not. At least Nikki encounters somebody else this time...who has a warning for Nikki and her uncle Eugene. Waking up for real this time, Nikki finds that her backpack had been stolen, and returns to her room, to face a new peril. Then Ashley arrives and jumps to conclusions. (Jesus, even for wish-fulfillment cheesecake girls, they are absolutely dense!) Of course, when a college security guard is summoned, he turns out to be even denser than the girls. (Yo, even spoiled rich girls can be genuine crime victims. DUH!)

But there is more. And even more. And Nikki gets a mysterious package. So she goes to visit Mr. Donnelly, whose office also had been broken into. Nikki's uncle Eugene is an archaeologist, and has arranged to contact Nikki and Donnelly the next day. That evening, Nikki finds herself frightened and not wanting to be alone, but for those who were hoping for a lesbian scene, here comes disappointment. But in this dream, Nikki meets a wood elf named Kib, and he gives her a piece of fruit that she eats. And then she finds herself suddenly in love with Kib, and...well, well, we get our lesbian scene after all!

Nikki goes to her prearranged meeting with Donnelly, accompanied by Pita, but something terrible has happened to him. Then the idiot security guard from before comes back, but Nikki deals with him. Then Nikki and Pita return to their room, but a visitor calls. And what is she after? Never mind, some fan service...and further fan service. Whoops, not quite. We're back to the main story, and...oh dear. And what's going on with the faery statue? But that must wait for later; after all, the girls still have to attend to school matters. Oooooh, an interesting development...maybe all the girls' interest in Nikki has nothing to do with lesbianism after all? But alas, though Nikki tries to get back into the groove of her school routines, trouble finds her again...but this time she isn't going to run off. Uh, oh, Nikki's magic power from before fails her. Then she tries to get rid of her attacker and get her uncle released by offering him the statue, but the attacker refuses to bargain, so Nikki finds her magic again...but alas, it still fails her. Then Pita arrives and sees what is going on. Her intervention fails, but Nikki finds a more conventional means to deal with her attacker, and it does the job. It turns out that Pita had mistakenly believed that everything had been just a cosplay game, but Nikki explains to her that they are involved in a genuinely dangerous situation.

They then plan to visit Nikki's dream world together, but when Nikki enters it, Pita is not around. Nikki is not, however, alone. Which is providential, for Nikki quickly finds out what a spriggan is. And her savior is named Talona, who is no friend of Nikki's earlier companion Kib, but she agrees to take Nikki to Kib's watch point up in a tree. (As it turns out, Pita never fell asleep.) It also turns out that Kib doesn't like Talona either. He is still enamored of Nikki though (and vice versa).

Goodness me, now what? Ooooooh, now we're seeing more lesbianism. Or maybe not. Nikki is now out of dreamland...and whoa, what's going on with Ashley? (Now this is quite a plot twist!) And again Nikki is in peril...but this time, it is the pim who comes to the rescue. It turns out that the "statue" from earlier was a pim sent from the other world to Nikki, but somehow it got frozen until Nikki inadvertently freed it. Unfortunately, their problems are just beginning, and the pim starts explaining to Nikki about the dream world she had been going back and forth from, which is named Terestai, and how Nikki happened to get involved with it in the first place. But the pim also tries to "recharge" herself using Nikki, to the latter's annoyance. Nikki is in fact annoyed enough to demand further explanations from the pim. But what about Pita? Oh.

Chapter Three: The World Of Terestai

So, finally we learn more about Terestai. It had been a happy and carefree forest world watched over by Mother Alondra, inhabited by faes and elves. Humans, or at least their spirits, would sometimes be brought in by Alondra, and those who were brought in would assume that they had merely experienced a dream after they were sent back. One such human Alondra actually fell in love with, and she taught him the ways of her world. Unfortunately, he would turn out to be an evil man who desired power, and would venture into the dark world among the malevolent creatures who had been banished from Terestai, where he would form an alliance with them. Realizing the awful truth, Alondra used her magic to lock her former lover into the dark forest and out of Terestai. The man, who would become known as Exor, would try sending various creatures from the dark forest to attack Terestai, only for the invading creatures to be turned to stone. (Anyone reminded of the Doctor Who episode "The Keeper Of Traken"?) Then the invasions cease...but Exor had merely been biding his time until he could launch a far more powerful attack, which succeeds, as the inhabitants prove incapable of fighting back. Some of them, however, are organized into a counterattack force.

As Exor had become too powerful for them to fight, Alondra makes the desperate decision to involve Nikki Sprite in her situation. Alondra thought she could keep the fact hidden from Exor, but he discovered it anyway. After a struggle, Alondra succeeds in sending the pim through to Nikki, but things had gone wrong as described earlier. After concluding her tale, the pim admits that she has no idea why Alondra had specifically chosen Nikki Sprite to help her.

Despite everything, the real world must still be dealt with...in more ways than one. And now we find out that the pim can disguise herself as a human...sort of. And whaddaya know, after everything, we learn that Nikki isn't really a lesbian after all. (Presumably it wasn't just the fruit.)

And how is Pita doing? (We pause to be interrupted with a completely different and unrelated story.) Oh, now we're just as suddenly back. An orc arrives to attack Kib's watch point, and though he cannot climb up the tree everybody is in, he can still bring the tree down. Pita fights back as best she can, but she cannot do too much. Now what is going on? Oh, who cares anymore?

UPDATE: Evidently the author didn't. The actual story was discontinued in May 2016 as mentioned above.

I've seen this type of artwork before, but I had no description for it. I asked Oddguy about it, and he told me this:

And what does he depict? Lots and lots of cheesecake female pictures in lots of titillating sexual situations. Oh, and sometimes male characters and fantasy characters and background, but those don't really matter. This is the place to see titties, buttocks, and pubic hair. 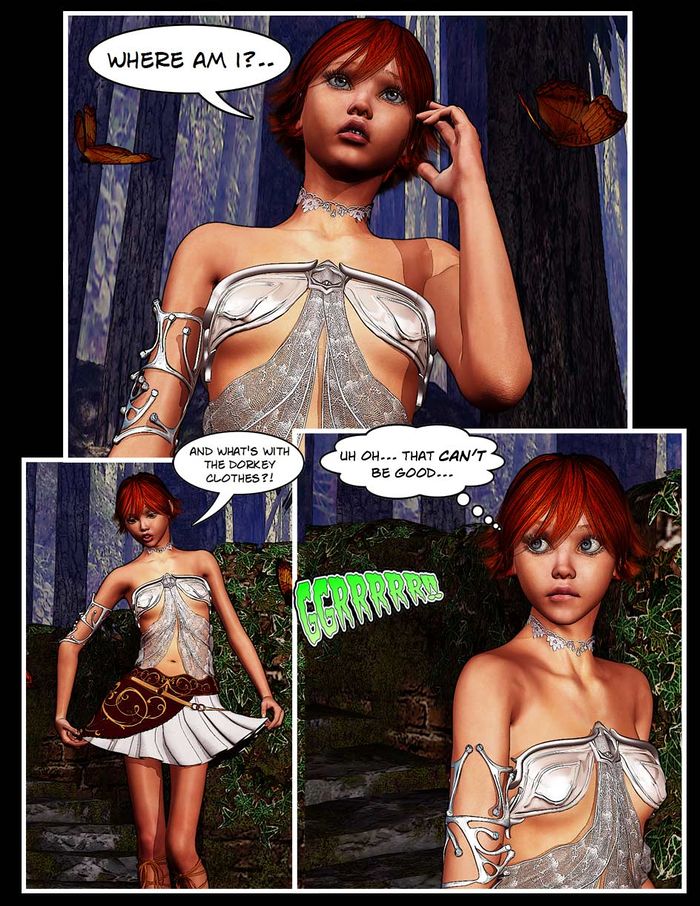 GASP! A shot of the title character with her private parts COVERED!

The story moves very slowly and randomly, the fact being made worse by too many non-story-related cheesecake shots of the main characters in a variety of titillating poses being stuck in among the strips. If you have a real story, just get on with it!

No additional information besides the links provided.

Could this have been made into a good webcomic? I've seen roughly similar material to this in Heavy Metal magazine, which features adult fantasy with beautiful art and gripping and clever stories, much of it by European artists. So how does Nikki Sprite compare? This features a random, confusing, and cliché-filled story, poorly-developed characters who are mostly just lame stereotypes, gratuitous images of female private parts and titillation humor about lesbianism and girls going down on each other (which I suspect would offend genuine lesbians), very frequent interruptions of the story by a gazillion cheesecake shots of the main characters, as well as interruptions by a completely unrelated webcomic series done by the same author. Okay, if you have another webcomic of yours you want to advertise, do so, but for God's sake don't mix the strips from that one into your current one if the two scenarios are obviously completely unrelated!

UPDATE: As mentioned above, the story itself has been abandoned, so it's just the cheesecake pictures now.

SECOND UPDATE: The latest panel claims that the author is going to resume the actual story. Three years is an extremely long wait by webcomic standards, so I'm not holding my breath.

THIRD UPDATE: It's been over a year and the author hasn't even put out any cheesecake pictures. This webcomic can be considered as dead as a doornail, but I'll be charitable and give this webcomic a "Glacier" tag, since the author promised to continue it.