A while ago, back when the wiki was hosted on a different site, a user wrote a review of this comic that focused on only one aspect of the story, which was the crazy plot twist that bridges part one and part two. As a result, I will not address that twist at all. Don't worry, there's still an awful lot to talk about.

From the very first page you know what you’re in for.

Fionna is an average kid, whom no one understands. Mom, and Dad, and Vicky are always giving her demands. Everything is terrible and the worst for Fionna until she meets her new neighbor, Lia. They become fast friends, and eventually Fionna develops romantic feelings toward Lia. They also make friends with another gay teen and his boyfriend, and they all hang out. Time passes and eventually Fionna and Lia confess to each other and start going out in secret, but the school and Fionna’s parents find out, and keep Fionna from seeing Lia. The climax is when Fionna and Lia go to prom with their gay friends, for a planned swap date, when more drama ensues and everyone gets exposed, and the twist that I won’t address happens.

On paper, this doesn’t sound bad, apart from being extremely melodramatic sometimes. Unfortunately, it’s written so poorly that none of this matters, but I’ll get more into that in the "Writing" section. Where the madness truly begins is with Part Two. 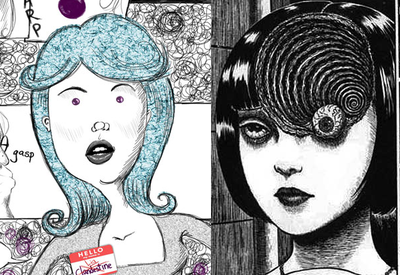 This part begins with exposition on Fionna’s real life, how her mother tried to kill herself and Fionna when she was younger, and after blocking out the memory of the incident, Fionna found solace in her dreams. However, years later, she remembered her past and attempted to kill herself, putting herself in a coma and initiating the events of Part One. In her coma dream she fell in love with Lia, but eventually the dream ended and Fionna woke up. She found a mysterious book that allowed her to fall asleep again after weeks of insomnia, and this is where Part Two truly starts.

Fionna wakes up in her dream room and is totally naked. Her conscience shows up, but their escape is halted by this No Face guy. He shows up and....uhhh.. some shit happens and... her conscience flies in and... Oh I guess they’ve escaped now.

It’s revealed that Lia was kidnapped by Sadako, who is actually the queen of the dream world. So they leave and meet this...Clandestine... who tries to trap Fionna in the uncanny valley for a bit, and then turns into a junji ito monster. She then meets Sarah, who turns out to not be Sarah, but to be an actor wearing the head of Sarah. See, all dreams are actually shows put on by dream people in a Truman Show-esque fashion.

Okay, this is dragging on way too much, so I’m just going to summarize from here. Fionna meets a resistance that then declares Fionna their leader just because she happened to make a good point. They break Fionna’s conscience out of prison, and start their journey to rescue Lia.

There's this one point where Fionna disappears briefly, and it’s revealed she woke up and overheard her family considering pulling the plug on her, just in case you forgot that this was all happening in a dream world. The journey continues over several years as they travel from town to town on dead leads, until one day they come across the writers for Fionna’s coma dream who give them the address to where Lia lives.

They travel there and Fionna meets up with Lia, who turns out to be hundreds of years old and also a serial killer. No, really. But it’s a trap! And Fionna is taken to Sadoko, where we get another humongous backstory dump about how Sadoko was a little girl who trapped herself in the dream world after being rejected by a schoolgirl that she was manipulating. She becomes queen of the dream world and initiates the Truman Show dream system, but eventually grows weary and wants to find another powerful dreamer to take her place.

She first tried with Lia, but Lia didn’t want to fight anyone anymore, so then she turned her focus to Fionna, and was behind all of the events of act one in an overly complicated scheme to get Fionna to kill her, which she does. She then has to calm down Lia, who has gone full-serial killer again for some reason, and reunites her with her conscience.

Cut to years later where Lia decides to horrifyingly fuse with her conscience, and Fionna decides to do the same.

Cut to even MORE years later, where Fionna and Lia decide to be reincarnated, and to reunite in the dream world when they die in the real world.

And they lived happily ever after...?

Yeah, this is fuckin’ weird, right?

I bet she used the default brushes too, fuckin' pleb

The author said that she started this comic right out of high school, and it shows. The art style reeks of animu, weird perspectives, and bad proportions that were common among these early webcomics. Color is added later on, which does help increase clarity with the weird composition, but most of the comic’s early flaws remain. But that’s not all, folks! The backgrounds are comprised of weird textures, patterns, gradients, CG Renders, and real photos. All-in-all, there’s some serious corner cutting here. To help with the corner-cutting, we also get crazy and confusing panel layouts that fill at least 30% of every page with empty nothingness. The word bubbles are a weird conundrum because sometimes they look like they’ve been pen tooled in, and other times they’re drawn in. It’s awfully distracting, and I’m 90% certain that everything is being done on the same layer. This comic has a serious case of "I-just-got-Photoshop-and-I-have-no-idea-what-I’m-doing" syndrome. And is that... JPEG format!? We’re looking at a real fossil here, folks. Someone should put this in a museum. 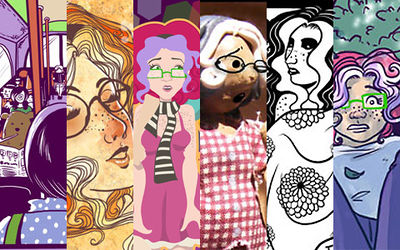 Just fuck me up, baby.

The moment Part Two starts, right away there’s an immediate jump in quality in the artwork that only gets better from there. As someone who loves contrasting art styles and The Amazing World of Gumball, this comic’s artwork is right up my alley. However, some of the issues from Part One still carry over, such as bad and confusing panel layouts, and instead of being typed, the text becomes handwritten, making it slightly harder to read. Also the artist seems to have no idea how wings work. 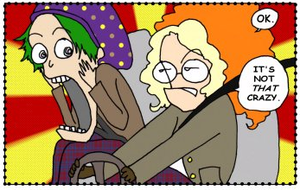 Guest panel by The Brothers Chaps

The writing overall isn’t amazingly terrible, but it falls into a lot of pitfalls that amateur webcomics tend to fall into. Like, characters being horrible people who never face consequences or retribution for the terrible things they say and do, the main character being automatically the best at everything while simultaneously being kind of an asshole, racism, characters doing things without any motivation or reason to do so, the entire story halting for a moment so we can learn the full unabridged backstory of one character, the entire story halting to make a statement about something, conflicts either being dragged on way too long, or resolved in the blink of an eye, and really, really overly complicated evil plans for things.

Taken from her website’s front page:

"Rosalarian" is the pseudonym of writer and artist Megan Rose Gedris. She mostly makes comics, but if you’re here, you probably know that. She has done work for a plethora of publications, as well as a lot of self published work. She lives in Chicago.

She travels the country performing burlesque under the name Florence of Alabia, singing and dancing and telling jokes. She also occasionally does stand up comedy.

She sews a lot of weird leotards. She was a cheesemonger for three years. She worked in television for seven years and won an Emmy. She wishes she could be a mermaid. She likes doughnuts a lot. Her favorite color is every color.

She’s made several other comics that I haven’t read, and I’ve never heard of any controversy around her. Also the description isn’t lying, she really did win an Emmy for an animated commercial she did. To be honest from both her work and the things she’s said on her Tumblr and other media sites, she sounds like a pretty cool person.

I Was Kidnapped by Lesbian Pirates from Outer Space was one of this author's later works, and it was a big improvement from what she did here. It took some time and effort to track down, because she took it off the web over (allegedly) getting stiffed on royalties by her publisher, and not being able to recover her rights to it in spite of that. No creator should have to go through that with their work.

Here is an extra tidbit which no doubt explains the meaning of the webcomic's name:

YU+ME Dream was Gedris’ first comic, and it shows. I think the whole reason this comic was popular to begin with was because it was made in a time where webcomic standards were rock bottom and the LGBT community had to take whatever they could get in terms of non-sexualized representation. But it’s a new age, and there are now tons of great comics out there with LGBT characters, so we no longer have to defend shit just to keep representation out there.