Relish for comics of similar quality is an excellent indicator for shittiness.

This is the formula for YOSH! Now before I get hit with a stereotypically Japanese object by the weeaboos out there in weeabooland, I would like to point out that I like a lot of anime. I liked Spirited Away. I liked Ghost in the Shell. I liked Cowboy Beebop. Hell, I even watched bits of Inuyasha for a couple of years when I was confused and broken and alone.

But all those movies and television animes (save Inuyasha) are good because they broke the totalitarian Rules of Anime Law, transcending the rigid boundaries of "standard anime" in beautiful, wonderful ways. Whereas YOSH! follows every Goddamn rule to a tee. Like a webcomic version of Josef Mengele, it follows every horrible anime doctrine, torturing all that is good in art and ruining it, leaving it to be murdered and bloodied.

When Flora of TwoKinds decided to date Piro from Megatokyo.

After reading through this comic, rereading several strips, and attempting to make some kind of sense out of the scribbles in the first one hundred comics, I came to the conclusion that these first 100 webcomics don't have a storyline. Like a woman breaking through the glass ceiling strip the first breaks the fourth wall in a hailstorm of glass. Especially the word bubbles, which have shadows underneath them. This highlights the fact that the drawing is a two-dimensional storyboard rather than an actual refined piece of artwork, by the way. Flora from TwoKinds is telling Piro from Megatokyo that the penguin from Neon Genesis Evangelion is making Bill Cosby's Jell-O from Greg Dean of Real Life's Pepsi.

Something happens involving Final Fantasy XI in some way and somebody gets murdered through their computer screens, followed by Flora trying to cover it up by doing what she always does (i.e. making some kind of reference to being naked.)

Now somebody is making hate crimes against Pepsi. A ninja is trying to kill Piro, and I can't blame him because we all want to kill the blubbering bastard deep inside. Then Piro asks Flora what her family life was like and Flora, being a Keidran, suddenly goes feral and kicks him out the window.

More people are trying to kill Piro for reasons unexplained. But, because Piro is a MOTHERFUCKING ULTRA SUPER SAIYAN MASTAH ZOMG he's able to dodge all two hundred and forty five attacks without a scratch. Goddamn, I gotta start eating Maruchan Instant Lunch and Mountain Dew and watching Chobits and Naruto because judging by this comic it makes you into a superhero who is capable of defying all rules of logic and physics. Except for when the artist wants some HILARIOUS ANIME REFERENCES to come into play, in which case you can be beaten over the head with a mallet by a Japanese schoolgirl for our stilted amusement.

And naturally we have OMGKAWAIIDESUDESUDESU SUPAH CHIBI TIME!

The rest of this comic is exactly like this. It's all the exact same. The art improves minutely, the artist discovers color later on, and other shit happens, but basically from page fucking one all the way to the end it's seven hundred pages of the heavily idealized life story of an anime nerd and his heartbreaking tales of almost getting raped by fangirls and fanbois at anime conventions. And of course the obligatory AWESOME FANTASY SCENES and action sequences and characters being kidnapped by government agents for no reason.

Really, the story jumps around so much I never knew where I was throughout the comic. I tried to figure it out, but mostly failed. What I got is that the tiger girl is the last of a race of catgirls, and then they have to go to Japan and do shit with girl robots who can easily be turned off like Stepford wives or some shit. Most of these characters say y'all for "you all" in classic redneck-speak.

Before you attempt to read through those first one-hundred fifty something pages, you should know that he conveniently explains the storyline in a single long page! I wish I could just read these notes and be done with this comic, but let's just get our bearings and keep on sloggin'. I'm not going to write out that whole explanation on these pages. I read it. You read it. Done. Even then I don't fully get it. Fuck it, we're moving on.

The very next page is some pseudoscience bullshit, and then a comic and a lot of filler. Usually I hate filler, but thank God it's there this time because thank Jesus in heaven it means I've got more shit I can just skim rather than actually read.

That said, I couldn't get through the rest. I ended around comic number two hundred and fifty. I defy you to read further. 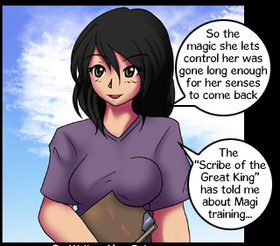 A prime example of how not to draw breasts.

I don't get it, terrible "artist" guys. I don't get it. You keep on telling me that you cannot go back through your archives and fix your "art", and then you admit that your "art" is horrible Godawful amateur shit and apologize profusely, meanwhile having a donation bar for $200 in donations just to the right of this shit, and you expect fans to pay you for your laziness and inability to improve crap that you made that you expect me to read through to understand your inane and completely uninteresting story.

My TwoKinds article has been reedited about four times now. I have spent hours going over old reviews and updating them. I do this BECAUSE I ENJOY IT. And, here's the damndest thing: I DON'T GET PAID FOR DOING IT. I do not expect you to pay me for these reviews, and you do not expect for me to ask you for money. That is the way it should be, that is the way it must be with any amatuer work, and you webcomics people are VIOLATING this simple expectation. I don't give a shit about your fucking server costs. If you don't want to pay, can't make enough comic books to keep the comic up, and have to ask for money to keep up your comic, shut down your fucking webcomic and keep your old drawings of naked anime schoolgirls under your pillow to jack off to at night. You won't, because you get off on the intense adoration of your mindless fans, but still. Thought I'd throw that out there.

All right. As for the "art", it goes from old pencil stuff to colored stuff which is reminiscent of such "artistic" luminaries as Pastel Defender Heliotrope in that it's a complete mess and looks terrible in every way. Then it goes back to old pencil stuff. Then some more JDR color. On and on like this, page after page.

Finally here it switches permanently to color. Notice the city skyline, placed on top of a planet that's apparently far smaller (judging by the incredible curvature of the horizon) and far more poorly drawn than our own Earth.

This shit's getting way too long, so let me give you the short version of some other important art points:

Want to know what the biggest issue about PIRO! YOSH! is aside from being every single animu cliché put in a blender and served with fresh, steaming shit?

A FUCKLOAD OF STOLEN CHARACTERS!!!

That's right, nearly all characters are stolen, Not-Flora and Not-Piro being the earliest examples. But there's also that sunglasses and cloak wearing DL dude, his appearance stolen from Naruto's Shinji Aburame. PenPen is stolen from Neon Genesis Evangelion downright to the name.

And do I hear there someone asking "appearance AND name stolen?" 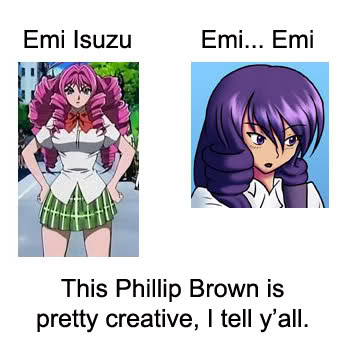 As being said Anime is the theme of the writing. That is not an overstatement. That is the writing. That's all it is. All of it is just anime. And not good anime, either. Scenes at cosplay conventions. Bore-ass backstory about how catgirls came to be.

Any comics that break the mold and talk about something other than ninjas or Azumanga Daioh, like this one, are shit. Am I supposed to squeal with glee at the "cute" penguin eating Jell-O? "D'AWWWW HOW CUTE PENGUIN DON'T NEED TOM WITH HIS JELLO PUDDIN' POPS OM NOM NOM NOM ^______^" is I guess how I'm supposed to react to this comic, but I can't. A lot of questions pop into my head, none of them good, regarding the author and his talents and sanity, but the penguin isn't interesting. Frankly, while penguins are cute and slightly neurotic, we must remember that Opus the Penguin was the penguin character zenith, no other penguins have even come close to Opus' bizarre neurotic cuteness, and YOSH!'s rather boring and bland penguin is not even in the same league. Mr. Brown, your penguin is really closer to, if not lower than, the Ctrl+Alt+Del penguin on the penguiny cuteness scale. That is not a compliment, by the way. Not at all.

Here are a few observations:

Let's just finish this off easy and say it's just painfully fuckin' cliche. I mean, seriously, all of these things are so overplayed in everything that there is literally nothing a person could do to add to them. They are saturated ideas. COME UP WITH DIFFERENT FANTASY ELEMENTS. Add a giant dog that flies. Make your characters ninjas that live underwater and fight evil shark Mafiosos. Write a story about a guy that dresses as Max Headroom and hijacks a TV studio. DO SOMETHING NEW. FUCKING SHIT.

If there's one thing I can't stand, it's someone trying to make money off of their webcomic without putting in the time and effort to deserve it.