Another BWW member found this but lacked the will to try reviewing it. I had difficulty trudging through as much as I did.

As I already explained, the horrible artwork and lettering makes this webcomic literally unreadable.

Before I start, I should point out that this webcomic has no less than 852 story pages, not including title pages, fan art, etc., so as might be expected, I will not even attempt an outline of the story. The archives of this webcomic list two "books": the first one with no less than 20 chapters, not including prologue and epilogue, and a second one with (as of this review) seven. So I plan only to cover enough of the story to give the basic atmosphere.

An evil witch named Marissa roams the land causing trouble, including placing a curse on a man named Marcus Molin who opposed her, the curse consisting of making worms come out of his body. Marcus seeks the help of the wizard Martin, who gives Marcus an amulet to prevent the worms from emerging, which is the best Martin can do. But Marissa makes further trouble for Marcus by stealing the amulet. Martin cannot conjure it back, but he can make Marcus's worms bigger, the idea being that they could be used as weapons against Marissa. Marcus is found by Inquisition Knights who are also after Marissa, and they join forces and attack her, but the attack fails. Then Martin arrives, but he only intended to distract Marissa until Marcus could use his powers to collapse Marissa's cave, trapping her and her minions. Martin and Marcus escape, and the curse is evidently gone, but is Marissa really destroyed?

Nope! In fact, Marissa goes and visits Marcus face to face, though Marissa's has changed. The two start fighting, but Martin arrives and intervenes, warning them that Marissa's curse has made her a slave to Marcus. Marcus is ready to destroy Marissa, but Martin begs him not to for a number of reasons, and Marcus complies. Later, Marcus returns to the witch's mountain and encounters Jerald, one of the Inquisition Knights, who is also looking for Marissa, but he does not want her killed either. They search for Marissa and find that she has been captured in a nearby village by another Inquisition Knight and is about to be executed.

They enter the village and try to stop the execution, only to be declared heretics and face execution themselves. So Marcus uses his worm powers again and Jerald fights with the knight who tried to execute Marissa. Jerald defeats the other knight while Marcus saves Marissa from execution, and Marcus and Jerald flee the village with Marissa as prisoner. They go visit Martin, and they all decide to travel to the city of Aldona to visit their library. Trouble is, we learn in a flashback that practicing magic there had been outlawed.

But why? Never mind, one must never question royal decrees. Or the commander in charge of escorting the princess...not even if you are the princess. Whoa, it turns out that the bodyguard leader was a plant by the Inquisition Knights to assassinate the princess! She flees and runs into our heroes, and they fight against the bodyguard leader, with even Marissa helping. But again it takes Marcus and his giant worms to save the day. The princess then has our heroes follow her to the castle of her intended husband Sir Johan. They arrive, but leave Marissa outside.

I think I've told enough to give a basic idea of the storyline. But just for kicks, I'll give an introduction to Book Two:

Sir Jerald visits a queen named Alice who also has worms coming out of her body. As might be expected, she and Marcus Molin had known each other, and are both victims of the wormcurse. But Marcus was willing to even be stuck with the wormcurse to help his friend Alice, simply because she is his friend. Alice, however, intends to use her wormcurse to protect her realm. Jerald himself, in taking his knightly vows, is forced to live a life of celibacy, so no chance of the two of them ever having a romance. Never mind, the queen has a job for her knights. The mages are not her subjects but they agree to help. Uh-oh, somebody isn't happy! Namely Lord Olof Ironfist, a dwarf who was excluded from the war council just held. Why? The queen cannot spare her forces to help his realm, but still promises that she will assist him however she can. Ironfist is pacified for the moment.

If you think I'm going to read another page of this kindergarten-level webcomic, you're crazy.

If you thought I was exaggerating when I said that the drawings and the lettering were infantile, you won't after seeing this panel: 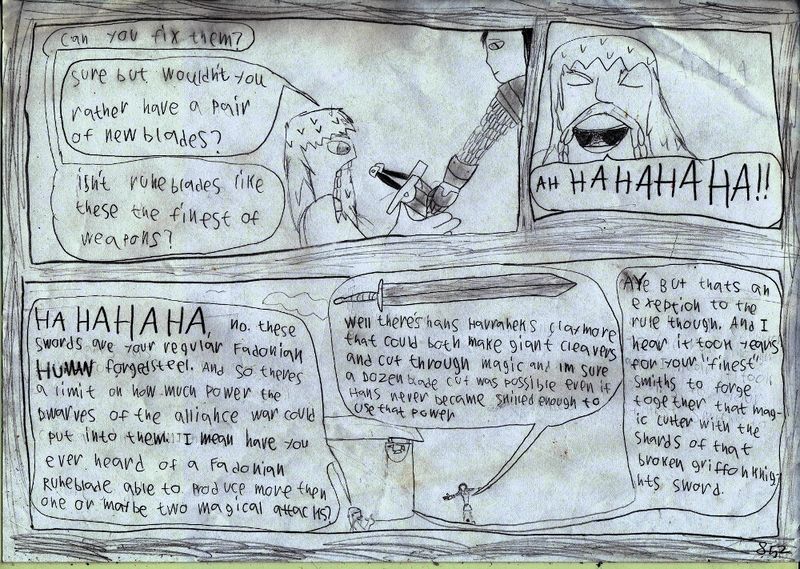 After nearly 900 strips, this author still can't draw better than THIS?

Artwork consists of extremely crude black-and-white line drawings (except for title pages, where he uses blocks of color instead) with no shading, depth, perspective, or animation, very inconsistent proportions, and as shown in the above picture, a smudgy "shading" covering everything, presumably to make the drawings look "artistic". Of course it just makes everything look messy, especially since he even covers up the word balloons with the smudging. Is that supposed to conceal how bad his lettering is?

There are other badly-drawn webcomics reviewed on the BWW of course, such as Kawaii Otaku Daigaku, but at least they had readable lettering, even if it was digitally added. And most webcomics reviewed here that did start out badly-drawn at first at least made some level of improvement as they continued, including Triquetra Cats, Furthia High, and 21st Century Fox. In others such as Mushroom Go, the author eventually decided to farm out art duties to other people, But the fact that the artwork of this webcomic remains so infantile even after literally hundreds of panels were drawn suggests that either the author has some sort of physical or mental problems, or he has a very low opinion of his audience. And this is not a deliberately bad troll comic either; there is no sense of parody or irony in the storyline.

UPDATE: The author has since dispensed with the overall smudging of his pictures. Unfortunately the artwork is still toddler-level, and so is the lettering, so this hardly constitutes an improvement.

Being Swedish, we can assume that English is not the author's first language, so we can cut him some slack on the occasional misspellings and grammatical errors. (Certainly he does a better job with the English language than Andrew Fraser, author of Bridgette's Belly!)

I have little familiarity with the swords-and-sorcery genre, or with the authors that Holmstrom refers to (see below). But from the view of an outsider like me, the story is, at best, nothing special. It is basically full of swords-and-sorcery tropes, stock characters, and a logical but banal plot. Walls of text, especially text that is hardly readable, don't improve matters either. There is nothing in this story that hasn't been done better in other works of fantasy. Nor does this webcomic qualify as a comedy; there are bits of humor (Marissa having a remember list with entries such as "Buy more sugar" followed by "Take over the world"), but overall the story plays itself straight.

The author in his own words:

"Im a humble amateur author and comic artist. The meaning of life is the way I see it to have fun follow a dream. And of course be nice and considerate to people around you and all that crap. Im a proud member of a study circle dedicated to writing science fiction and fantasy and the leader and creator of another study circle dedicated to making comics. Im also working on a adventure/comedy/epicfantasy webcomic wormcurse. Im a kind, silent and nerdy guy with a huge love for audiobooks, Daim and Jäegermiester."

When this webcomic was brought up on our forum, several people debated as to which other webcomic we had already reviewed on our site that Wormcurse was most similar to. After reading several pages of this webcomic, as well as the author's commentary, I concluded that the webcomic we've reviewed that Wormcurse is most similar to is Lewis Lovhaug's The Lightbringer. To quote the author again:

"Im not kidding my full name Is Olof Magnus Gunnar Holmström which makes the initals O.M.G.

Nah just kidding those guys are (oh) my gods... ok SORRY but I LOVE PUNS! "

The Lightbringer was derivative of every superhero scenario in existence, while Wormcurse does the same thing with swords-and-sorcery scenarios. (The magic wand fight in one scene was directly copied from Harry Potter And The Deathly Hollows, Part 2.) Both webcomics also suffer from poor artwork, walls of text, undeveloped stock characters from their respective genres, and banal and unoriginal storylines. Both webcomic authors evidently began their creations with the idea of "I am a fan of X genre of entertainment and I can write a webcomic based on that genre!" Unfortunately, being a fan is not enough. It certainly cannot forgive artwork that literally looks like it was drawn by a three-year-old child.

At least Lovhaug tried to improve his webcomic by farming the artwork out to other artists, but that did not solve his writing problems, and he ultimately ceased it altogether. But Holmstrom's webcomic still looks like the work of a toddler, and the only "improvement" since this review was first written was to dispense with the smudging on the pictures, which only makes it slightly less intolerable. Like I said before, it's not merely bad art, but painful-to-read art. No webcomic or any other sort of visual art is going to work if people cannot stand to look at it.

UPDATE: This webcomic has not updated in months. Just as well if he abandoned this thing; it sucked from day one and never got better.