One of the most popular genres of webcomics is fantasy manga. For some reason, fantasy anime dorks are among the most industrious brand of nerd out there because there are a crap-ton of fantasy webcomics in production today. However, said fantasy anime dorks are also really unoriginal, usually end up putting out the same kind of story: Elfie-Sue character falling in love with some other dream boat and they cast magic spells and have great giggles on some treasure hunt/quest/whatever. For a fantasy manga to get noticed on the web, it has to have some distinctive quality to set them apart from the crowd.

In the case of World Break, that quality is really, really pretty artwork. Unfortunately, that's the most positive thing I have to say about World Break. 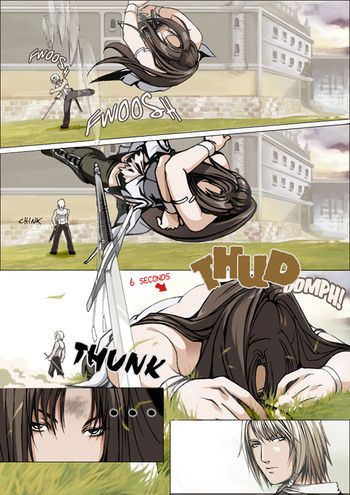 How do you throw a person? A faceless person for some reason... And why the fuck does it matter she was in the air for 6 seconds? What the hell is going on?

Hmm, this is a tough one. Despite having an archive of well over 100 pages, there really isn't much of a story. I'll give it a shot anyway…

Ruarke is a young lad who is a "Dreamscaper," which means that when he falls asleep, he can conjure up monsters that attack and murder people. Society sees Dreamscapers as a danger to themselves and the general public, so when one is discovered they are sentenced to death. However, Ruarke somehow escapes death to visit holy hell back on the relatives who forsook him.

That's pretty much it. Now, I could've gone into the drama behind Ruarke's sister, flaming younger brother, or any of the bishonen knights, but they really don't have any bearing on the story itself. If I took out all the scenes of them prattling back and fourth, and only left the stuff pertaining to the main story, Ruarke's struggle, I guarantee you the archive would be 1/3 its size. If that.

(On a related note, Bishonen Knights would be a hilarious name for a boy band.)

World Break actually starts off fairly strong. Following Ruarke and his family's struggles with his condition through the prologue is actually quite compelling. However, this thing starts to unravel when we start focusing on other characters who don't bring anything to the story other than cheap laughs. Also, when the more intense action sequences start, the visuals start to get very confusing.

There wasn't much on A.T. Kraust I could find, but here is what I could glean from her work. She's a woman who makes an effort to hide her gender, similar to J.K. Rowling of Harry Potter fame. I'm not sure why she would do this other than to escape judgment of her work based on her gender. Either that, or she has a really weird first name. Perhaps A. T. means Armin Tamzarian? Hell, I can dream.

It's okay, A.T. I don't judge your comic based on whether or not you have a vagoo. I'm judging it based on its merits (or a lack thereof).

The artwork of World Break is easily its strong point, as it trumps most comics on the web. Entire teams are sometimes required to pull off what Kraust does by herself. The elegant painted manga style lends well to the fantasy setting, and is of a highly professional quality. This works for Kraust, but also against her.

I get the idea that Kraust is in love with her own work. VERY in love with her own artwork. Hell, I don't blame her. If I had her skills, I'd tattoo it all over my ass and show it to anyone with a half working set of eyes. Yes, it's pretty, but the story suffers for it. She spends so much time sending artwork sprawling across the page that she forgets that there's a fucking story somewhere in all this pretty crap. It's almost as if this comic is just one excuse after another for her to draw pretty fantasy characters in a pretty fantasy world.

Also, while Kraust is good at drawing her characters and establishing their setting, she's not very good at putting them all together to tell the story. Look at this page here. We have a major character jumping back into the action and what do we focus on? HIS FUCKING HANDS. Or how about here or here? Can you make out what's going on? No? Okay. I know it may seem unfair to take the artwork out of its context, but when the visual flow of the story is so frenetic that the reader can't make up or down of your pages (context or no), the artist fails as a story teller.

And that brings us to the writing review. Typically, the trend in comics is that if the visuals are great, the writing usually sucks and World Break is no exception. World Break's pacing is utter balls. As I said earlier, it takes 100+ pages for Kraust to accomplish what most creators can do in 30, and there are many reasons for this. The character interactions either ramble or fan pander. In either case, Kraust spends a lot of time not moving her story forward. The prime source of sandbagging comes from the luv pair Anri and Daiyamund. Anri and Daiyamund are supposed to bicker to keep the story light-hearted and interesting, but their squabbles do little to add to the story or their character development. All they really do is show that Anri is a childish moron and Daiyamund is an oppressive douchebag.

Oh, that's another thing. Anri is supposed to be the strong heroine of our story, but as I've mentioned, she's a childish, whiny brat, who nobody trusts to do anything and rightfully so. All she does is complain and what little fighting she does, she sucks at. Pro tip, Kraust. If you're going to have a strong heroine in your story, make her, I don't know, not suck at everything. And whatever you do, don't make her grand exit line "You don't play fair! *sob!*" She will have no credibility whatsoever.

World Break is comprised of little more than a lovely and shiny package to cover a sluggish plot and annoying characters. I write this review to show that even the best artwork can't save shoddy writing and that all that glitters is not gold. Sometimes, it's shit.