We have already reviewed Namir Deiter, which its author concluded, and though she is doing several webcomics related to that scenario, they are too similar to Namir Deiter to warrant separate reviews. This one is simply meant to be a gag webcomic unrelated to the others.

Not applicable, as this is a gag-a-day webcomic with no overall story line.

I shall begin this part by posting an excerpt from the "Art Review" section of Namir Deiter:

These are two different characters. One is a cat, the other is a rabbit.

The characters are animu style, badly done, and still is even after the same artist has done this comic for more than a decade. Proportions are bad and inconsistent, perspective is just as bad, and there are hardly any backgrounds other than copy pasted types. Even now, the author still cannot draw hands properly, and her characters are as stiff and inanimate as they had been at the beginning. On top of that, the characters have side mouths which hardly open, even when shouting.

To be fair, Namir Deiter had started in 1999 and kept basically the same style until its cessation in 2015, while Wonder Kittens was begun in 2013. So how does the art compare? 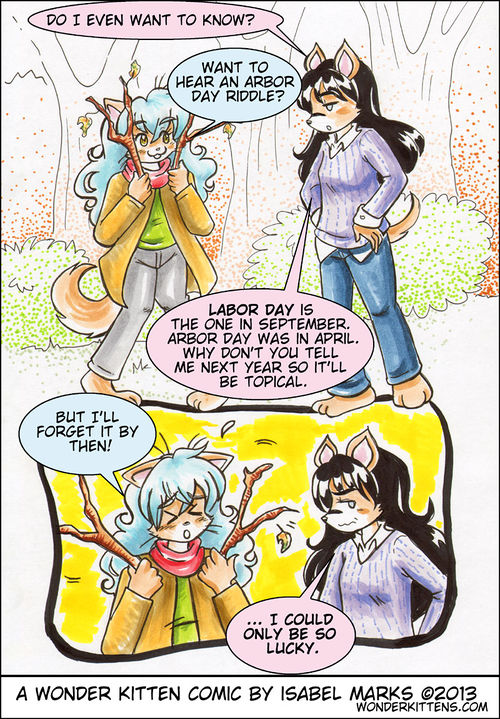 I suppose when you think about it, why waste good art on bad jokes?

On the plus side, backgrounds are more integrated with the characters, color is more subtle, and proportions and perspective are better, plus the figures are less stiff and more flowing. Best of all, the spiky hands are gone and replaced with more realistic ones. But the side mouths and pentagonal face shapes are still there, and it is still difficult to determine species... unless this is supposed to be an all-feline world.

Here is the first strip, which sets the tone for the rest of the webcomic, which consists mainly of unpleasant characters acting unpleasantly toward one another.

And if the jokes are not the putdown type, a lot of them are weird, or trite, or goofy, or completely random, or overdone, or simply make no sense at all. Holy One Frame Gags! Or Ballerina Mafia! Or Press Start To Play! Or...anyway, this one joins the dishonor roll of unfunny comedies.

The author was originally named Isabel Gonzalez, but she has married Terrence Marks and she now signs her webcomics Isabel Marks.

Even though her presumably most famous webcomic Namir Deiter got reviewed here, I gave it two stars for an overall rating because it at least had some merit. But this one, which is supposed to be a gag-a-day webcomic, is shockingly bad, especially considering that author Isabel Marks is a long-established webcomics author. What prompted her to write this dreck anyway?

I did mention in the Namir Deiter review that Isabel Marks was no good at comedy, and she certainly proves it here. But the true shock is that this webcomic consists mainly of unpleasant characters and unpleasant putdown humor as described above. Note to Isabel Marks: you're passable as a story writer, but you have no comedic talent at all.

UPDATE: it's been nearly a year since the last strip was added, so the author presumably called it quits on this webcomic. Good thing too, because it lacks even the meager merits of her other works.