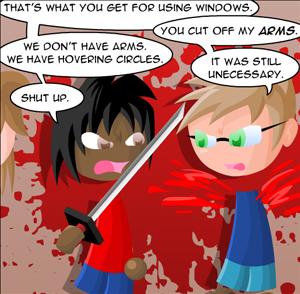 Gratuitous violence, obnoxious Mac fanboyism, and lampshading the lazy art, ALL IN ONE PANEL!

There are a few moments in Kyle Mistry's magnum opus Weird Comix where the characters don't kill each other. In those cases, they are drunk, inane, bland, stupid, full of shit, and fucking nuts.

I halfway considered putting this turd into the Ninth Circle, but then I remembered the webcomic Electric Retard, which unfortunately is still on the Internet. This one gets bumped down because it wasn't as bad as a comic drawn by a pedophile whose every strip consists of Hitler mauling people with an axe and then defecating in their mortal wounds.

Even then, I could only move it down one circle. This comic is terrible.

This comic always sucked. Probably Mistry's biggest mistake in writing it was in keeping it on the Internet. He knew it was bad, promised to quit making it, yet still left what he had up. Unfortunately, what he had - like I already said - rivals carnographic webcomics like Electric Retard in its violence and horrifically bad drawing quality. This webcomic is pretty much unreadable by anybody with above a first-grade reading comprehension ability.

There isn't much of one. We're introduced to Mistry's Mary-Sue, who goes about violently dispatching people in the name of humor. Partway through, he goes camping and is found incapacitated in the forest. For most of the rest of the comic we're treated to Mistry's observations on various things I really don't care about, and somewhere down the line the whole mess just ground down on Mistry until he scrapped the project.

This art is unviewable. It's awful. There's really not much else that can be said about the whole thing. He starts out very poorly, with a digitally-done style that a child could best. It remains insufficient at best for most of the comic. Eventually Mistry assumes a style similar to Ctrl-Alt-Del. By the end his work was very competent, and much of the failure of the early ones had been eliminated. But it was far too late to save Weird Comix. The comic ended here, unfulfilled and largely unloved.

Evolution of a horrible comic. See how it turns from some kind of anime/Rayman hybrid to Ctrl+Alt+Del. 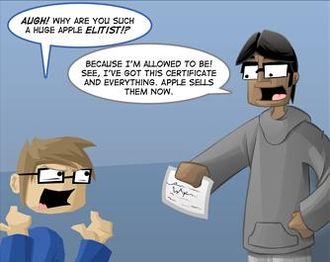 Just because you acknowledge that you're an obnoxious dickhead, that doesn't make it okay to be one.

This is where the webcomic truly fails on a fundamental level. Mistry just couldn't tell a joke for the life of him. Every comic, save for a very rare exception to the rule, ended with violence.

Kyle Mistry's interesting in many ways, a Hot Topic reject in many others. His site lists "the creations of Kyle Mistry". Many of these works are very interesting. For example, his Masked Man, Man in Your Head and some of his work illustrating for other blogs is perfectly acceptable work. It's tolerable and well-done. His only real failure is Weird Comix.

This review was a nightmare to write, and I'm sure it's tedious to read, too. Such is the way with Weird Comix. It turns violence into a tedious, mundane, boring affair. It is so terrible, it could well be used to desensitize soldiers to killing and warfare. Its violence is overwhelming, its writing is mind-numbingly banal and its drawing quality is barely above a child's. It can safely be said that Weird Comix is as bad as it gets without putting a comic right into the Ninth Circle.

UPDATE: This webcomic has been erased completely, so everyone can sleep better tonight.