Someone linked this to me as a candidate for 'worst webcomic ever'... and I'm not sure I disagree with them. It would be too easy, however, to just say "This webcomic is fucking awful, and Eric Flores should drop dead for drawing and writing it for two damn years." In fact, this comic's terribleness almost speaks for itself. But I digress...

When I first looked at it I thought it might have been a parody, in the same vein as Powerup Comics - you know, those really terrible parodies that make fun of works by being ten times shittier than whatever they're making fun of. Sadly, it was not to be, and as I read further and further into the archives, something niggled at some distant corner of my brain more and more, until finally I realized what was going on and I had to take a walk just to calm down enough to keep reading.

If you manage to ignore the banner, and the overt warning "NC-17 for graphic depictions of Sexuality and violence," you will likely notice the first comic has been stretched and deformed beyond all recognition, and saved as a JPEG directly from MSPaint, which seems to be Flores' drawing program of choice. However, even if you ignore these, it's likely that the fourth strip will clue you in to what is to come. For no adequately-explained reason, all the characters are naked with no transition, or indeed warning. This, like many such instances in the comic, is likely caused by a deep-seated misunderstanding of 'Paganism', 'Wicca' or 'witchcraft' - terms that Flores uses interchangeably, showing how little he knows of pre-Christian beliefs as well as modern revivals of same - bred of fear and/or pubescent hormones.

The plot focuses on Llewellyn Renee Connors, AKA Warmage, who through some convoluted business involving his father and an Indian spiritualist, receives a sex-slavewilling concubine and the Armor of Rama. The Armor of Rama creates a bulletproof force-field around Llew and is the catalyst for many superheroic adventures. The sex slaveconcubine is the catalyst for a lot of sex. 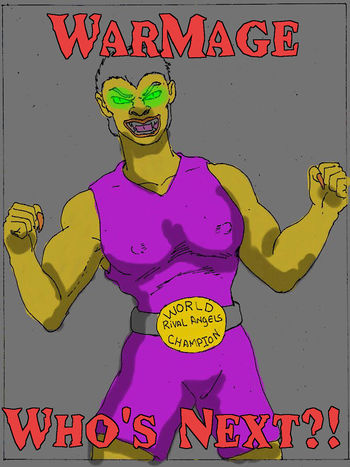 Flores seems to struggle with men, women, breasts, profiles, backgrounds, doorways, mouths, jawlines, speech bubbles, and not saving things as JPEGs with MSPaint. He also seems to have difficulty with consistent penis size.

To his credit, Flores experiments with different fonts and speech bubble styles, but never quite manages to improve his basic linework. Or panel composition. Or sense of aesthetics. Or human decen- whoops we'll have none of that.

I'll say this: Laranya is meant to look like a 6'5" Kriti with dragon teeth. She looks like a man. Either Flores is halfway competent and drew her like this intentionally, in the process managing to forget that earlier one of his characters wanted to kill Kriti because she thought Laranya was her, or Flores can't consistently draw female faces. I think you know which one my bet's on.

This is where the true challenge comes, and where this comic truly turns from "Eh this is kinda bad," to "I want to strangle you in your sleep, Flores." You see, Flores once knew a guy who knew someone who was totally into that whole neo-Paganism Wicca thing and whose great-grandparents were born in India, and so Eric considers himself an expert on all things Hindu, Pagan, Christian, BDSM and super-hero. Because, y'know, in Wicca, every ritual is performed nude. And in Hinduism, dharma is absolute, inviolate, and brings eternal peace. And bondage works like this (and please, don't make me dwell on the connotations of Tsuki calling Llewellyn "Daddy," even in everyday situations. There's either some real issues there or bondage is way more fucked up than I thought).

I'm not saying that these impressions are wrong - in fact I'm sure there's some hardcore traditionalist Hindus who deem that dharma must be inviolate and seek to pursue their allocated role in life perfectly, no matter what. And I'm sure there's some hardcore bondage role-players who dole out punishment in the bedroom for acts performed throughout the day and insist on being called "Daddy" in all situations, roleplay or otherwise. But do you know what all of these things are? Misrepresentations. Eric Flores is that guy who learns one thing about a culture and reduces that entire culture down to that one facet. Even Llewellyn's reaction to rape, which might be a poignant moment of character development, is reduced to a single moment of a stereotyped reaction, then is quickly and anticlimactically resolved and never comes up again.

This is Flores' other failing. Any moment the comic looks like it's about to get interesting, it gets resolved completely anticlimactically. It's like Flores tries to follow the setup-tension-release model but forgets about the tension. Worse still, every 'twist' is cliché, despite the fact that Flores has far less done-to-death storylines and far more interesting ways of approaching those storylines staring him right in the face! Most notably (and unforgivably), Llew supposedly becomes medium-aware at one point, but all that seemingly comes from this is that Llew can now occasionally detect something is wrong when it's already completely obvious that something's up. Such awfully wasted potential. (Darn it, this comic has gotten to me. Looks like I couldn't hold off all those bad comments until the end.)

{Don't believe this bio. Read the one in Monster Lover)

Fuck you, Eric Flores. Gods that felt good. Seriously though go die in a fucking hole. You consistently and constantly draw and write the most contrived, retarded sex scenes (and I mean this quite literally, as your characters lack basic mental faculties) for no reason other than because you can, and even then it's poorly-drawn and your women will often randomly turn into men because you couldn't draw your way out of a fucking paper bag. You also retroactively turned a character into a construct made specifically to have sex with your self-insert Mary Sue, along with her sister, then used fucking dharma of all things to explain it. Your action scenes fucking suck, often serve no purpose, end with no sense of accomplishment and are just filler while you think up the next contrived sex scene for the drooling, soulless idiots you call characters to engage in. You misunderstand, misrepresent and horribly, drastically simplify and stereotype cultures and subcultures in the worst ways possible. Your plots, conflicts and resolutions are juvenile, and betray the mind of a fucking horny 15 year old who just wants to get on to furiously jerking it while drawing the next sex scene in fucking MSPaint. The one time you have a chance to handle something in a mature fashion, you fuck it up so badly it becomes an insult to rape victims that rivals - and possibly even surpasses - Dominic Deegan. You are a terrible example of a human being and my only praise for you is that your comic isn't more popular, which shows that the majority of people have some basic level of fucking taste or something I guess.