I happened to find this webcomic by chance, and found it quite enjoyable.

It has stayed good all along.

There is no overall storyline, just a series of short stories using the characters.

Line art with flat colors, in a cartoon style akin to that of Looney Tunes. 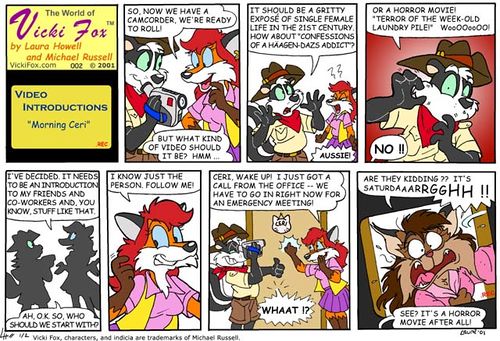 You mean you can be a Christian and still not be a perfect angel who can do no wrong? Impossible! 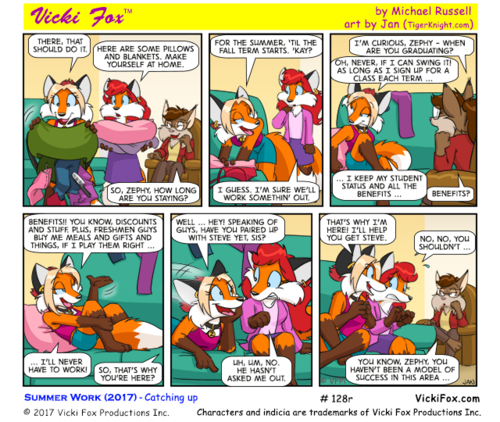 Jan's art style. Unfortunately not quite the same.

This is a light entertainment webcomic. No deep theology is discussed; nobody questions their faith (well, perhaps with the exception of Zephy Fox, but she doesn't raise any religious questions either), and no wild adventures in exotic places. Another member of the cast, Steve Reynard, is an example of someone who was a wild boy before becoming a Christian. As for theology, this is as far as it goes. 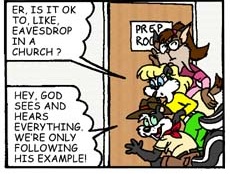 What's with all this light-hearted humor? Where is my self righteous preaching?!

"Candid video" Vicki Fox may be a Christian but at least she's not without mischievousness.

"Southern Belle" Vicki has a romantic crush on Steve Reynard, but is too shy to tell him about it.

"Geoff Hansen" One of the strip's human characters.

"Craig Wolfe" And someone has a romantic crush on Vicki!

"Growing up" Vicki Fox's (literal) evil twin Zephy. (Actually, not so much evil as self-centered and immature.)

"The Mystery Man" Even Christians can be tough...

"Zephy gets to the point" ...and have a past not to be proud of.

"Let the show begin" A pecan festival in Apopka.

"Movin' In" Vicki and Meredith when they were college students. (For the record, cheerleaders are typically disliked by other girls at school.)

"Thanksgiving surprise" But eventually they befriend one another.

"Feed their hunger" The strip acknowledges that it is sometimes necessary to bribe Bible students.

"Mutiny on the backstage" Despite the rivalry, Vicki is willing to stand up for her fellow cheerleader.

"Cross circuit melon" One of a number of the comic's guest strips (yes, this is an actual Japanese tradition).

"My gold, not yours" Zephy has found a more suitable job for herself...in more ways than one.

"Disappearing act" Well, it would have been unrealistic for Zephy Fox to ditch her old ways overnight.

The webcomic is Christian-themed, but it's not like Jack, where you can expect to see Heaven and Hell and angels and demons. Everything takes place on Earth, and no supernatural beings appear.

The page describing everyone involved.

This is light entertainment for all ages. Though Christian-themed, the webcomic isn't a morality play or rah-rah Christian propaganda. If you think that religious webcomics are all like After Eden or Jack Chick Tracts, here is an example of one that isn't.