I love Hiveworks. With comics like Sleepless Domain, Manly Guys Doing Manly Things, Empowered under their label, I would believe anyone who says that it's the salvation of the comic medium.

There was this little navigation bar under one such comic that I thought was a Hiveworks one, and on it was a little comic called Last Nerds on Earth.

...It was not a Hiveworks one. Here's one of the ways I found out.

If the oh-so-original premise wasn’t a downfall in itself, our main characters’ nerd argument (Superman verses Batman; bet you haven’t heard that one before) continuing to page five (only being interrupted by a stiff action sequence) is an omen of just what is to come...

Oliver and Adam are two teenage nerds who travel the world after a generic zombie apocalypse ravages the world.

....That’s it. That’s the whole story. There’s also this thing where the most popular jock in school is the bad guy (make sure you mark that on your cliché BINGO sheets) and his girlfriend has the hots for one of the leads (and that one). Oh, there was also some subplot about some Walmart-style drone making her way through the world too, but the series petered out before any real shit happened with her.

“But wait!” every devil's advocate in the audience cries, “Surely there’s a gimmick to separate this comic from all the other ones riding the Walking Dead’s coattails.” The gimmick here: the leads are unlikeable nerds who rehash the same arguments you’ve already heard while trapped in an elevator during Comic-Con.

Granted, I imagine the unlikable/boring-nerd-argument thing wasn’t intended, but it’s very much there.

The art’s okay. Not really something to write home about, but certainly the worst out there. Going into it, you might think it looks passable, at least...

...Then you notice things. Like how the background has the tendency to be flat. 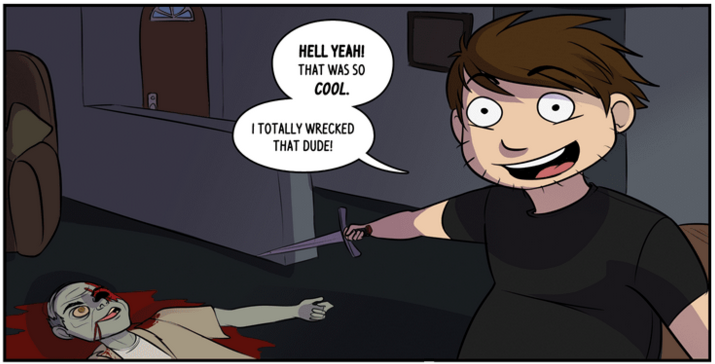 And vertigo-inducing at times. 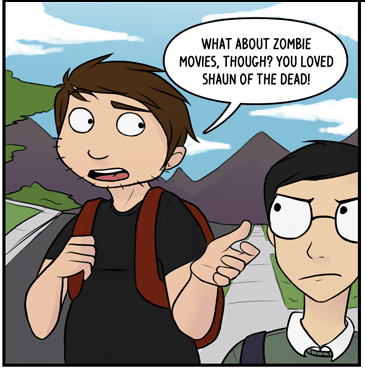 And sometimes the stuff of MC Escher's nightmares.

Then you notice how perspective can look like it was run over by a steamroller.

And that the angle shots have gotten a similar treatment. 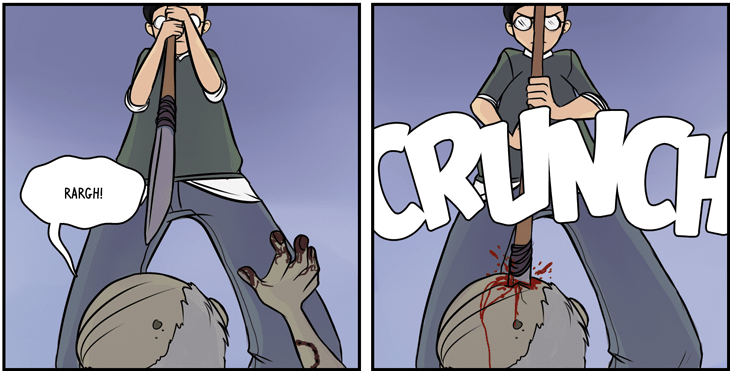 Which is probably around the time when you notice the stiffness of the action shots. 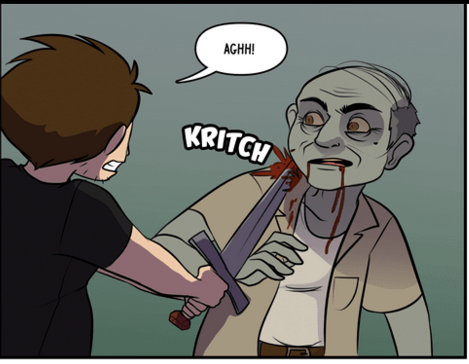 And how speed lines don't even help. 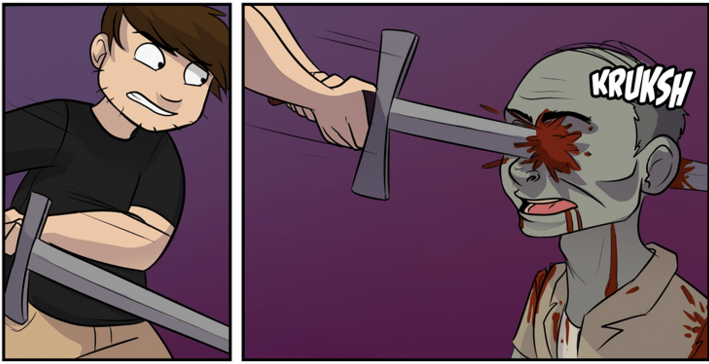 Then you notice how the anatomy (primarily with faces) look like something that was banished from the Uncanny Valley for being too off-putting. 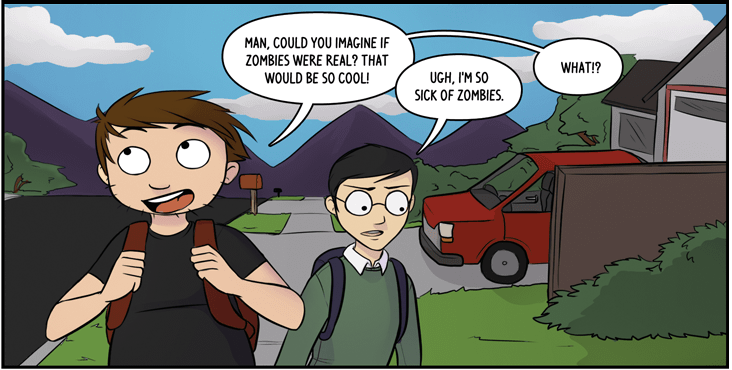 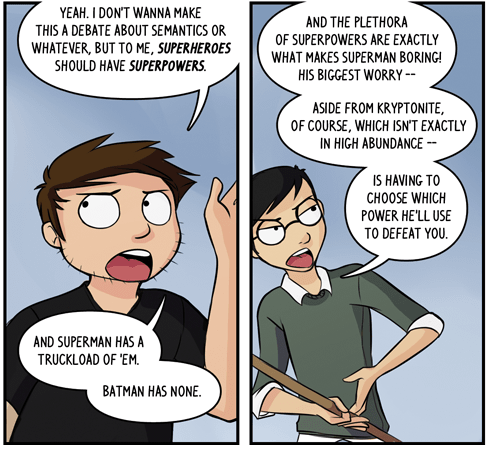 So, what? This is merely a case of an artist's skill not being up to snuff? Well, you'd think that...until you look at Austen Marie's work outside of Last Nerds on Earth.

This art (from what I can tell) was done around the time the comic was still active. In fact, art related to the comic that's not actually in it is way better than the comic's actual art.

The art just doesn’t make much of an impression. It’s like mashed potatoes; it’s there, but nobody really makes it a point to notice. The action is mostly stiff. You can see the parts where the artist fucked up the lines while employing the ol' cut and paste tactic (I don't care if the panel designs are in the script, your lines should be clean).

But the sad thing is, I think the artist's work outside of Last Nerds on Earth is very good. Obviously, some sort of shit went down to keep her work from being up to snuff. Maybe it was scheduling issues. Maybe issues with the writer (see the Authors section). Or maybe it was laziness.

Let’s get this right off the bat: the whole story is a boring clichéfest that’s riding the zombie fad hard enough to mate with it. What gets me is the fact that the writer acknowledges that the fad is overdone past the point of needing to be taken out back and shot. Meta-self-awareness like this (and it happens a lot in this comic) is often used as a means to cover a writer’s ass while they continue to work with flaws/problems they know exist/people bitch about, as opposed to fixing them. But it’s kind of like pointing out that there's a massive pile of burning garbage in your front yard

Getting back on point, being part of a popular trend isn’t necessarily a bad thing (though it might be something you might want to avoid), so long as your story is good. It's why we bother giving a shit about Shaun of the Dead or Zombieland, despite all the clichés being very present.

Last Nerds on Earth misses that mark hard for so, so many reasons.

For starters, the main characters are major Gary Stus. They’re automatically good at fighting (via the “vidya games = mad shooting skillz” cliché) despite being fucking nerds, one of the few girls in the comic automatically swoons over one of them, they can use racial stereotypes for(what passes as) comedy while others can't, they have no real flaws or depth as characters, they're almost always in the right...

The author says that an influence of this comic was Scott Pilgrim. Let’s look at the titular character from that modern day classic, shall we? He’s a nerd, but also an interesting/relatable/compelling character for one reason: he was human like the rest of us. He had flaws, he made mistakes, he tried to learn from his fuck-ups and get stronger, and he still had that redeeming quality that made us like him. His flaws were what we stuck around for, in that the story was about him conquering them.

But you know what? It doesn’t even matter, because most of the other characters in the comic are completely unlikeable anyway. We went over the nerds already and why I want them to be eaten by zombies. We have a jock who’s an asshole because the plot designed him that way (and even then, he’s more likable than the nerds because he’s not an insufferable Gary Stu). We have a retail drone who reacts to a (predictable) mass suicide with a level of uncaring on par with a serial killer. (And don’t try that “it’s dark comedy” shit. It needs to be funny for that.) The only character I ever really liked was the jock’s girlfriend, mostly because she’s surrounded by douchebags and acts genuinely human.

Which brings us to another problem with the comic: how it handles drama. Bad shit happens in the plot, but it’s usually quickly dealt with before being forgotten entirely. Granted, there are a few sequences that are effective and some moments are touching, but it never leaves a lasting impression on the characters. Yes, we all know that Batman will come off as annoying if he talks about his dead parents enough, but even then referencing it enough makes for a compelling character/story. I’m not saying spend a whole chapter of your character sobbing. I’m saying have your drama/tragedy serve as character development, rather than just part of the story.

As for the comedy...well...let’s let the comic talk for itself here. Austen is a freelance artist who lives in LA, takes commissions, and streams drawing vids. Couldn’t really find anything too interesting to talk about here. (Not like I’d want to. I’ll leave the gossip to ED and Reddit.) Again, I think her work outside of Last Nerds on Earth is pretty good.

Matt used to be a writer on Cyanide and Happiness, who officially left that comic over “creative differences.” From what I read on C&H’s blog, stress was to blame. From what I’ve read on his AMA, he was kicked out and can’t discuss this for legal reasons. (I don’t know. It’s all Game Grumps sketch in here.) The comics I found of his on C&H were hit or miss. (Although this is much appreciated, Matt!)

Now, we can’t talk about this section without talking about the break-up. Austen and Matt were (according to the AMA) a couple, and them breaking up professionally/personally(?) has resulted in this comic’s hiatus. Matt himself has voiced uncertainty about this comic’s future and is mostly sticking to video game LPs (and, of course, Patreon).

Not the kinda comic you do a cliché drinking game with, as you’ll be dead by page twelve.

Like I said, this comic is on hiatus, and I think that’s the best thing that could happen to this comic. Not because of your standard/asshole “hurr hurr because the comic’s dead and can’t hurt us anymore” way, but because it gives it a chance to improve.

But until then, this comic needs to...just look at the flowers...

The comic (No, the nerds don't die in the end)

Austen's artist page (She takes commissions. I wonder if she'd draw Adam and Oliver being eaten.)