Seems like some people in the forum have a hate-boner for this webcomic, and I'm happy to blow them.

The moment the author started spamming her boring-ass exposition.

The story starts with our two protagonist girls (Jo and Alika), and a duo (an old man and a young woman) who are secretly following them.

The girls get back to their home, which is an abandoned apartment. Alika suggests they play cops and robbers to blow off some steam. Now, I expected 3 pages worth of scissoring, but turns out they decide to actually play superheroes, but instead of masks and spandex, they use hoodies. They get tricked into a trap by the couple mentioned above. The old man and woman are now wearing creepy masks and demand that the girls follow them. Obviously, the girls decide to fight, and they get BTFO by the old man. Turns out Jo has some kind of mind power and has prosthetic arms and legs. The old man (Jack) decides to lower his guard and allow Jo to enter his mind so that he can gain her trust. She learns that Jack is looking for the same person she wants to hunt. Jo and Alika follow Jack and his daughter to his hotel. After pages of exposition, we learn that Jo was raised as a supersoldier, and all her limbs and spine were replaced with cybernetic ones. She escaped and is now teamed up with Alika to hunt the guy (Raph) that did this to her. Jack has some connection with them yada yada and now they all team up to hunt this guy.

At first, I thought the art was decent—- turns out I was dead wrong. Sure it’s clean and clear, so not Sonichu-tier, but oh god the same face is strong with this one. Everyone has the same fucking nose and eyes. The faces are at least bearable, but the bodies of characters are stiff and deformed. The author draws muscles like they are flat symbols which is a huge eyesore. The background is drawn badly and is lifeless. Since this is an action comic you can bet your butt that the fight scenes are shit too. They’re slow, awkward and lack any motion. 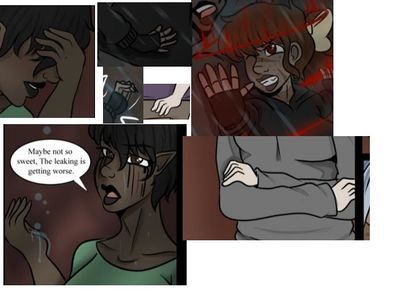 It was me, Hand, the bane of shitty artists

Joanna (Blackbird): Our protagonist. She is a midget-tier young girl who has a huge scar over her face and body. She also has no arms or legs and yeah, she has some kind of mind power. Despite being in captivity for a child soldier program from a very young age, she still acts like a normal girl who secretly wants to be a superhero. The author also tries really fucking hard to portray her like she’s the cutest thing ever.

Alika (Miss Murder): She is Joanna's lover. So far it seems like she’s a hothead who really really loves to beat people up and is protective of Jo. Also, she has pointy ears which seem to be a weird thing in this universe, but Jack never asks so we don't really know what she is. She thinks Jo is the cutest thing ever.

Jack Petrov: We don't know much about him. He is pretty stoic and looks like he’s bored the entire time. So far he doesn't have much interesting to point out despite being a superhero. Every time he opens his mouth I feel bored too. He feels guilty because he didn't do anything to stop Raph back then, and now he’s trying to stop Raph along with Jo.

Diana: We don't know much about her other than that she is Jack's daughter and some kind of scientist who can fix Jo’s prosthetic. She also thinks Jo is the cutest thing ever.

In short: barely worth mentioning.

Right now, the story is only like 50 pages and it already bores me to death. Quite an accomplishment. The reason is probably the exposition, but also the fact that the story fails to capture people’s interest. It is another ‘child supersoldier turned rogue’ cliche in a capeshit world with no selling points. The dialog is clunky and unnatural and that just makes everything twice as hard to read. 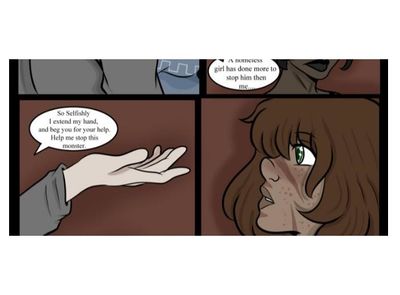 Another weird interaction between characters is that Jo and Alica never really ask about Jack and his team’s story , despite that they don't really trust them at first. Jack traps them, beats them up, brings them to the hotel, and asks them questions, but Jo and Alika just stand there and explain their part of the story without asking for the same thing.

They (and us, the readers) barely know anything about him and his band.

The author is a young married lesbian capeshitter who has a day job and draws as a side job.

Nothing really interesting about this. Kinda like the comic’s plot, when you think about it.

The comic is lacking in almost every aspect. Most importantly, it is not entertaining. The one and only good thing I can say about this is that it isn't the worst thing on the Bad Webcomics Wiki.

Oh, also, the comic is in hiatus right now, probably due to real life schedule, or the author just doesn't feel like doing the comic anymore.

This comic's future is bright.