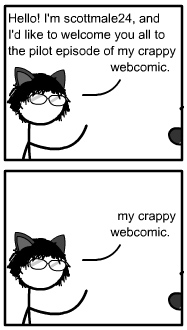 Pointing out how crappy it is will make it seem like I ironically don't give a shit! Ha! Ha! Ha! Ohgodpleaselikeme

Looking back, it was wrong of me not to start the site with a stick-figure comic. Let's be serious here. Aside from Order of the Stick (which is genuinely good) and XKCD (which is not genuinely good but nevertheless seems to have a bigger following and fanbase than OOTS) all stick-figure comics suck. This one, especially, sucks, but really, almost anything will suck if it looks like the creator spent as little time as possible in its inception.

I'm saying this comic sucks because the author himself, on the first fucking page, says the comic sucks.

There's a story? Sure, I guess. There's definitely a story to tell, one that will likely involve at least a few psychiatrists, in Scott Dixon's epic masterpiece of some of the most epic banality I've ever seen. (And yes, I stole the preceding epic lines from Solomon. Good of you to notice.) As with most webcomics, there's no story or plot here. This is definitely supposed to be a gag-a-day strip.

Do webcomics guys seriously think that people want to read a comic entirely devoted to their obsession with furry porn/regular porn/gay porn/Star Wars/Second Life/sticking their middle finger in their asses? If so, I have two words for them:

This comic's stick-figure art gets worse. I don't know how, I don't know why, but I know somebody is going to look at that and try to defend the author. In spite of the fact that the author himself already told us his comic sucks, somebody out there in BWWReaderLand is going to defend him and say that the comic's art doesn't matter, that this is a writing-driven webcomic. Or they're going to lash out and say that I'm not any funnier and why don't I go out and make a little electronic comic of my very own if I think I can do it so much better because I'm a big mean asshole and I don't care about anybody's feelings and I'm doing this to stroke my own cock.

First off: Thanks for noticing. Second off: I don't give a shit. This comic's art sucks. It's not even art; it's almost anti-art, the kind of work that shows so little talent and so little effort that it pretty much shits in the face of real artists who work their asses off to make real artwork.

I will say only one thing in Dixon's defense, and that is that at fucking least the man isn't trying to make money off the thing with copious ads and donation banners. He probably couldn't if he were showing it in a nuclear fallout shelter and his was literally the last webcomic left on earth, but that's besides the point. He's trying to be a starving porno-obsessed artist! Let's give him some credit for that. Okay, now some more vitriol.

These are Dixon's ideas of acceptable punchlines. Granted, many of these could be good punchlines, if they had good lead-ins and were delivered by dynamic, interesting characters. Or hell, at least funny characters.

But these characters aren't funny, the lead-ins are nonexistent, the jokes are pointless, and the comic does every horrible cliche fucking thing it is possible to do. Dixon can't even take an easy Katamari Damacy joke and make it funny.

He attempts to make a joke about shooting everybody in sight. Seriously, not funny. Not even meta. Not even dark humor. Nothing funny at all. It's just retarded and horribly written to boot.

Scott, why do you have a comic? Seriously. Thing is, there's no reason to take up bandwidth if you have nothing interesting to say. You're not even trying, which is what's pissing me off the most. By having your comic up you are insinuating that what you have to say is meaningful or entertaining in some way, but it isn't. It's a diary. Something you should have in a little notebook by your computer, rather than drawing a publicly-accessible comic about your desire to off the little old ladies at Wal-Mart.

I have writing on the Internet. In fact, a lot of what I write is stuff that actually has happened to me in real life. But I, like many of the better (or at least trying to be better) bloggers and artists on the Internet, am seriously trying to entertain, practicing my hand and drawing comics that I think are gradually improving over time. Do you have any ambitions in doing this publicly-accessible work? Is there a point to this?

This is something Scott Dixon actually wrote, a "Generic Update" from his DeviantArt. 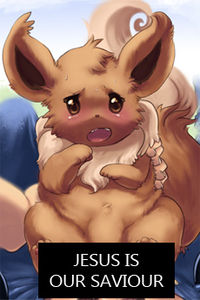 This is a bad webcomic. It lacks ambition, it lacks talent, it lacks art, it lacks decent writing, it lacks humor, and it lacks entertainment value. It is something that should not be on the Internet. It makes its author look like a creepy psycho that wants to shoot up public places and murder people. It makes him look like a creep. It has no raison d'etre. If the author wants to improve, he should give me a reason to take this review down and just take this comic down and replace it with a newer, better one. We can only hope.