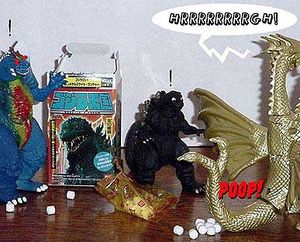 Literally the first page of the comic... comedy gold

Back in the days when I was a stupid 15 year old with internet, I had no idea what the concept of "quality" and "well done" were. Hell, I won't deny the fact that ten years ago, I even liked goddamn Dominic Deegan. Still though, that really isn't much of an excuse, but then again, at least 15 is better than 30+. I'll get to that later, but this is where I'm coming from. I found Twisted Kaiju Theater back in the days when Top 100 Webcomics was around (Is it still? I have no idea), and this was sitting nice and cozy around the number 5 spot (it later spent about a year at #1). Surely it had to be good, I mean, it was in the top five!

God if I could time travel I would go back and slap my stupid 15 year old self smart.

The comic isn't drawn. It's done using toys from the creator's collection. He literally has loved Godzilla so much he has collected mountains of toys, both legit and "bootleg", whatever the hell that is, and turned them into his little comic. Is it awesome, with monsters roaring and people screaming as Godzilla brazenly tramps through unfazed as he fights another monster? God I wish. No, the toys are used to make poop jokes. Constantly. Literally, that's all they do. Make poop joke after poop joke. Must be a 15 year old writing this, right? Oh, but it's been going on for over 10 years, so that must mean this guy writing poop humor is at least 25 by now, right? Well, add a decade to that, and you'll see how pathetic this really all is.

It always sucked, but it started getting REALLY bad around the whole "Shin-Goji can go super sayajin to save his underage girlfriend who is also a bird" storyline.

I swear I'm not making any of this up.

There really isn't much story and plot. There are snippets here and there, but it's 90% poop jokes last I checked. There was something about Mecha-Godzilla hiding among them and killing them all one by one at some point I think, but fuck if I remember.

I'll be the first to admit, Shin-Goji knows two things: Photoshop and lighting. That's all it takes to make a comic like this though, and considering he's been doing it the better part of a decade, I would hope he hasn't been keeping to the same techniques since the beginning. That's laziness only Buckley could hope to achieve. However, I gave it a two star rating for a simple reason: while yes, it does take time to do all this, he could be doing something more constructive with his talent. Like model shooting, or going on a tour with National Geographic, or making a comic that, at the very least, doesn't suck balls. Since it isn't hand drawn, and instead being made with pictures of copyrighted toys, I can put it akin to about the same level as sprite comics. Although there is at least ONE good sprite comic out there, I have yet to see a genre of comic so universally bad it makes me wonder how 8-Bit Theater managed to be the exception to the rule. The point is, even with all the laziness of posing dolls, oops! I mean action figures, at least he knows how to take a good picture, which is more than can be said for say, Surviving The World.

Oh good god the writing. You know what the bad thing is? The third time the last panel is just Geodrah just sitting on a pile of lemon-flavored marshmallows going "POOP HEH HEH HEH HEH HEH" is about twenty comics in. It's literally 50% poop jokes. Hell, the banner used to wear this fact with pride a few years ago. I think it went "Come for the cheesecake, stay for the poop jokes" or something. You think it's bad now? We haven't hit the surface. let alone rock bottom.

As with all terribly awful comics, the author feels the need to come in and directly intervene. Because nothing says "quality" like total disregard for the fourth wall. I know that breaking the fourth wall can be funny sometimes (and by "sometimes" I mean "almost never"). Hell, Deadpool is one of my favorite Marvel characters because of this, but really, unless you are super awesome at writing, which McGuinness surely is not, you can't pull it off. Anyway, he decides to come into the comic itself and fuck about, which is entirely harmless. Then he decides to add a few of his friends. This is totally harmless too. But the thing is, he has them all, including himself, represented as goddamn Godzilla figures. So half the time I don't know if this is Godzilla talking or "Shin-Goji". Is it Destroya or his goddamn roommate? Well, lucky for us he makes it pretty easy to determine who it is because soon enough the actual monsters get so little camera time they can be considered extras in a movie. And it's still about poop. But wait, there's good news! With the focus on McGuinness's scaly fursona and friends, we have a new avenue of jokes only a 15 year old can find funny! SEX JOKES! Yes, masturbation and rape abound! In fact, let's COMBINE sex and poop jokes for DOUBLE the ell oh ells oh god kill me now.

This is enough to make it hit this wiki, but we're not done yet. Eventually, jokes about how Shin-Goji never gets any and poop somehow get old, and he decides to bring in a new character. Well this is fine and dandy, I mean, he's been doing this for a while, nothing new right? Wrong. Unlike the other new characters, this one is completely original. It's not any better then his asshole friends. This character is a GIRL. And she has the hots for SHIN-GOJI for no other reason than "she does that's why". And to add to this perfect storm of ultimate wish-fulfillment, not only is she a nymphomaniac, but she's also UNDERAGE.

To make this perfectly clear, we are now reading a comic using toys from a 30-year old's collection about his self-insert Gary-Stu who is the same age as him and his imaginary, nymphomaniac, jailbait girlfriend who he bangs on a regular basis.

After that I just gave up. Someone else can flesh out the rest of this shit. 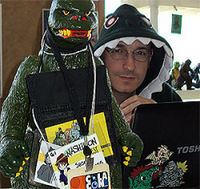 The creator... obsessed much?

If I had to go by his comic alone I would say he's a loser, maybe a pedophile, or if he isn't he sure likes making comics about him being one and he has the sense of humor a toddler might appreciate, if the toddler hadn't been exposed to the funny pages yet. But I know from a fact he's more than just a loser playing with his toys and writing stories about himself fucking a pretend girlfriend: He's also a complete and total asshole. He has "fired" several of his "artists" from whom he had commissioned sick drawings of "K-Girls". "What are K-Girl" you ask? They are the result of the person who makes this comic asking people to turn Godzilla monsters into women with impossibly huge tits and asses. Eventually this shit became a huge draw to his website and he got into a rights dispute with the artists who made this crap. Then, he tried suing them over their drawings. Mind you, these people actually came up with the idea, not him, so he had no case against them and in the end only made himself look like a giant prick. Later he began forcing artists to sign a consent document relinquishing the rights to the porn they submit to him.

But this was not the end because, eventually, he realized how repugnant this all was (the art, not his behavior). At this point he moved all the naked lizard rule 34 art to its own website called "Daikaiju Academy" in an attempt to make his website about poop jokes more respectable. A few years after that it seems his dignity grew back and he finally noticed that having a bunch of art from furry artists (and at least one who draws incest on a regular basis) does not make him look good no matter what website he keeps it on, and after all the time and effort he spent fighting to establish ownership of this crap, he deleted everything and announced that all rights to these drawing now belong solely to their original artists. However, not even the original artists wanted this stuff back because they also took a good look at what they were doing and some of them are now reportedly ashamed of their part in this and don't want it back.

But you know who did want all the naked kaiju girls art? The repulsive furries who have been jerking off to it for years. Not willing to give it up they saved it all in a fan-group on DeviantArt as well as a bunch of other places. So now, not only does Shin's shame continues to live on, but it had sprung up an entire subculture of sick fucks who draw these things and then touch themselves to it. All of this crap can now be found by googling "Kaiju Girls".

So thank you McGuinness for creating a new, vomit inducing fetish. I hope you're proud.

This review got sort of lost for a few years and was restored around 2014. By that time the comic had already ended. Beofre finishing Shin left a note on his site about the comic citing pretty much everything said in this review.

Twisted Kaiju Theater. It is NOT safe for anything. Its main running gag is a candy-pooping three-headed dragon and it just goes downhill from there. Seriously.

I really wish I drank. If I did, I would start and not stop until I had forgotten about this comic, and even then I would keep going just to be safe. 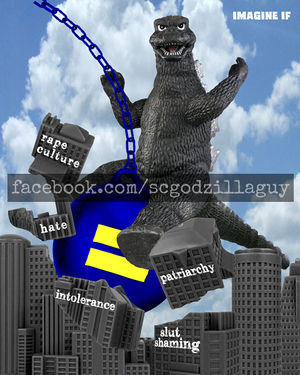 Yes, this guy is 100% serious
Retrieved from "http://badwebcomicswiki.shoutwiki.com/w/index.php?title=Twisted_Kaiju_Theater&oldid=32539"
Categories: