I originally found out about the works of Mr. Hiwatari through the article on this site by crookedglasses dedicated to Ki’s Webcomic Contradiction. I loved the article so much that I HAD to check out the comic, and it is still one of my favourite articles here. However, when I finished reading the comic, I couldn’t help but feel a twinge of sadness after such entertaining insanity. Either that, or it was indigestion. But, lo and behold! In the sidebar is a list of other comics by this insane little mastermind! And so, out of morbid curiousity, yearning for the insanity that was Contradiction, and a bit too much boredom, here is my binge read of Hiwatari’s Other Comics!

To say this comic had a downfall is a bit misleading, since it seemed to be building up to said downfall from the beginning. For now, though, I’ll just say this: the downfall of this comic is when our protagonists become a couple. And considering that’s usually the highlight of a romantic story, that’s just sad.

In crookedglasses's review of Contradiction, he/she summarized the plot by saying it was a story about a dumb girl choosing between an abusive jerk and a guy who seems nice at first. Well, that’s pretty much the plot here too, except the girl has actually has a brain, the abusiveness is ramped up by two hundred percent, and the guy who seems nice at first is our “villain." 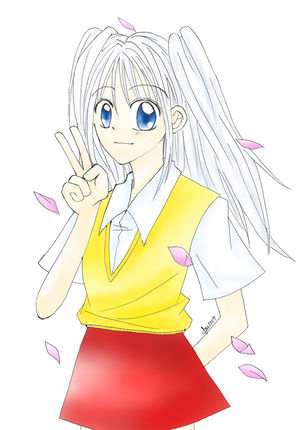 In order to properly show how terrible this comic is, I’ll be going plot point by plot point. And since this is a short story, there’s a lot more going on from page to page than in a regular comic. So if you click on all the links here, you’ll basically read the whole comic.

Our story begins with this #rapey cover page, as if warning us of the unfortunate implications to come. Anyway, the star of this comic is Yana, but I’ll be calling her Little Miss Cinderella for reasons that will become quickly apparent.

Little Miss Cinderella is teased at school because she’s poor. Next page she’s a teenager (let’s say highschooler because it’s Mr. Hiwatari), and her mom managed to land a rich guy who lives in a stock photograph of a house. However, her stepfather is physically abusive, and forces her to live in a small room in the attic. Her new step brother is also abusive towards her (just verbally, this time, but the list of his crimes against humanity will quickly grow), and she…just acts kinda mopey about it. You’d think being bullied and living in an abusive household would cause her to foster more resentment than just a passive “I hate rich guys”… Also, the school segregates the student population based on wealth, but is still willing to take students from all economic backgrounds…? Seriously, Mr. Hiwatari! What do you have against single student populations?

I’m only six pages in and already this story doesn’t make sense.

I keep trying to find ways to skip some pages, but, so far, I haven’t been able to do that because there is just SO MUCH WRONG.

It then cuts to Abusive StepBro insisting on walking Little Miss Cinderella home. She tries to shake him off, but then he hugs her “romantically”. I really don’t know whether to count this as emotional or sexual abuse, but either way it’s manipulation, so that’s another thing to add to the list. Little Miss Cinderella punches him off of her. Cue cheering. Unfortunately, we see that Abusive StepBro’s latest attempt to alter her behavior is taking effect. And as soon as she gets in the door, she’s subjected to more abuse from her Step Dad.

Excuse me for a moment. 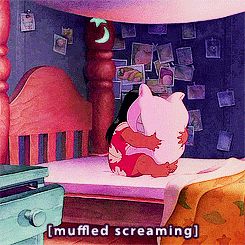 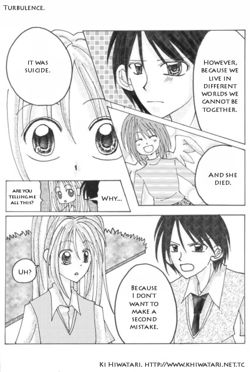 Typical happy situation in this story.

Is it sad that I like the way his sketches look better than the finished result?

This comic has all the proportion issues found in Contradiction. In the interest of not repeating what crookedglasses has already said, I’m going to focus on a different aspect of the artwork. Mainly, the “Comedic Chibis”.

I’m not personally against the use of Generi-spressions, as dubbed by tracyjb of Lackadaisy fame. I would be a hypocrite if I said otherwise since I use them myself. Not everyone is as skilled as tracyjb, and I honestly find them kinda cute. My problem with them comes when an artist can’t draw certain facial expressions without resorting to them. (Like in The Chronicles of Loth.)

With that said, I don’t so much mind that “Generi-spressions” are being used in Turbulence, but rather when and how they’re being used. This is a problem I’ve noticed throughout the comics of Ki Hiwatari, but it comes up noticeably here—they’re either used when nothing funny is happening, or used when they really shouldn’t be (like serious moments). For example, Little Miss Cinderella starts walking home, and she turns to see Abusive StepBro is waiting for her. This is treated like a comedic moment when there really isn’t anything funny going down. OH NO! SHE TURNED HER HEAD! HILARIOUS! And an example for inappropriate use is when Abusive Step Dad beats Little Miss Cinderella, and she later passes out from the pain. WHY ARE THERE FUNNY FACES HERE?! THIS IS HORRIBLE! This is like those cartoony murders from the Doctor Jekyll and Mr. Hyde animated movie! It doesn’t lessen it; it makes it worse!

So...what sort of characters are in this story? Let's take a look:

Yana (A.K.A. Little Miss Cinderella) – Yana isn’t nearly as passive as I remember her being from the first time I read this, and is only wistfully mopey for the first quarter of the comic. She has something that Ruya never did—a spine. She is probably the only character you can feel any sort of attachment too. Problem is…whenever she stands up for herself, she gets punished for it. Usually via beating. Which is probably the most realistic part about abuse this comic portrays. And even if you don’t read into anything questionable in this comic, she’s still relatively passive in the story as a whole.

Yuuko (A.K.A. Little Miss Cinderella’s Mom) – Where is she in all of this? Does she not care that her daughter is being beaten so badly that the maid has to clean up the blood? I don’t care HOW demanding her day job is—there is no way she’s completely in the dark about all this.

Kyo (A.K.A. Abusive StepBro) – NRGGRGRGHHHHGHHH! GAH! Okay, this guy is by FAR the worst part of this comic. The fact that he becomes Little Miss Cinderella’s love interest by the end of this is just so messed up! We are shown various times that he is probably just as abusive, if not more so, than his dad. He’s verbally abusive, physically abusive, emotionally/sexually/whatever-that-was abusive, and it’s heavily implied that he caused some poor girl to commit suicide! And I’m betting that after this comic’s ending, he’ll be sexually abusing our protagonist as well. Thing is, the comic doesn’t portray most of his behavior as him being a bad person, but instead uses it for evidence that he ~~loves~~ Yana (Little Miss Cinderella). He doesn’t like Yana getting close to another guy? Well, it’s okay because that guy was a jerk! He hits Yana? He was doing it because he knows what’s best for her! He hugs her in the middle of an argument? It’s only because he actually DOES care about her and he’s trying to change! But, as the saying goes, “actions speak louder than words”, and this guy’s actions are downright abhorrent! And, for the record, I’m not saying that an abusive person can’t change. However, if they DO change, it would take a lot more time and effort. And he will have to WANT to change—and I very much doubt some jerk trying to make the moves on his step sister would be what makes him want that change!

Eiji (A.K.A. Abusive Step Dad) – I haven’t seen such a hollow and abusive character since Uncle Larry from Forbiden Fruit.

WHO THE CRAP IS THE BRUNETTE?!

Other than shamelessly self-inserting himself into his manga, Hiwatari Ki the Author has committed no crime nor any internet douchery that I can see. He seems like a nice person. He is friendly and involved with his fans, which I can respect.

I mean, even in their Shipping Pics, she looks uncomfortable about the whole thing!

It’s admirable that Mr. Hiwatari wanted to address the subject matter, but the way he handles it here is just downright insulting. Suggesting that getting together with an abusive individual will make them stop being abusive is not only false, but it’s also a terrible thing to tell the target audience (which I’m assuming is 14-year-old girls). It’s like saying “it’s okay if your boyfriend is beating you! If you just let him walk all over you enough, he will change!” And making our protagonist an abuse victim comes across as a quick way to get us to feel sorry for Little Miss Cinderella. Which is just bad writing.

UPDATE: Hosting site Smackjeeves has been shut down, and this webcomic died with it.