I originally found this utter garbage while doing my first review of the comic Lemon, Inc, a comic in which Ben Pernick (creator of this filth) once did a guest comic for, as seen here. If that one strip is to be any indication of Turbosloth, the comic has the art skills of an intoxicated Stevie Wonder, the comedic skills of terminal cancer, and a use of Copy-And-Paste that rivals even Tim Buckley himself. That one strip, however, is not a perfect indication of Turbosloth. That strip is extremely mature by Turbosloth standards.

Right from the very first comic, this was a monstrosity. And while virtually every other horrendous comic on this wiki got better throughout time, this one hasn't. Ben Pernick is still just as sloppy, immature, lazy, and unfunny today as the day he started this mess.

In the webcomic world, artists who use MS Paint are considered the laziest, least adequate, and generally the worst (only second to ones who use crayons). However, Turbosloth sets a new record in suckitude by proving itself to be incompetent at such a simple tool. 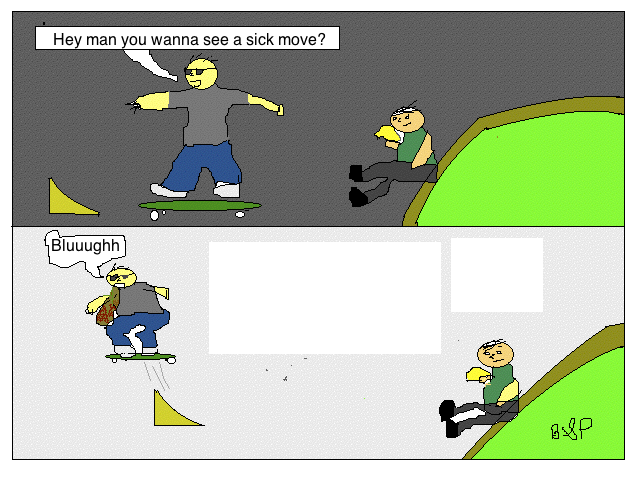 Anyone else want to shoot themselves in the head with a nailgun right now?

Let’s list everything that’s wrong with this one strip that we could get a drunken hippie to do right.

And this isn’t a one-time occurrence. Ben's never been able to have correct borders in the three year history of Turbosloth. Ben also likes to prove he can make very sloppy messes, which he does often. Notice in the last picture that everyone’s skin is completely white. Mr. Pernick has also proved to be a huge fan of Tim Buckley's famous ‘Copy & Paste’ style, in which the strip's panels have the exact same sloppy mess! Notice, in the last one, that the "defeated" house fly housafly is just an upside down version of the regular picture.

You read that right. He wastes an hour and a half every day on drawing this mess.

The final rant about this guy's art is that this comic cannot even be trusted to simply make an effort. Those last few panels prove, beyond a shadow of doubt, either how pathetic Ben Pernick is at making art, or how lazy this guy is at his own comic. 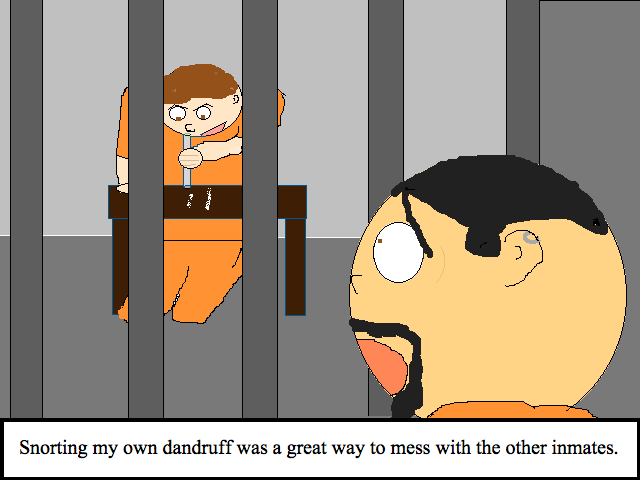 It takes a real disgusting man to appreciate the humor in snorting your own dandruff.

Anyone reading this who has even the most minuscule amount of respect for the comedic industry should be highly insulted that Ben Pernick considers himself to be a comedian. I've never seen someone try so many different types of puns and gags and fail so miserably at each one. For starters, Ben has never done a remotely entertainng one panel gag. He also can't set up a somewhat decent punchline. Now, this is the point where most amateur comedians realize they’re bad, and move onto something else. Ben, however, wants to prove that not only he’s a horrible comedian, he’s also a complete manchild with the immaturity level of a three year old. In summary, Ben Pernick knows about as much about comedy as he does acting like an adult. As in, not much. After all, it takes a very mentally disturbed man to find presidential assassination and terrorism funny. Sadly, that’s not even rock bottom for him! Sometimes, Ben Pernick is too lazy to even have a punchline! Even by BWW standards, the writing is atrocious. 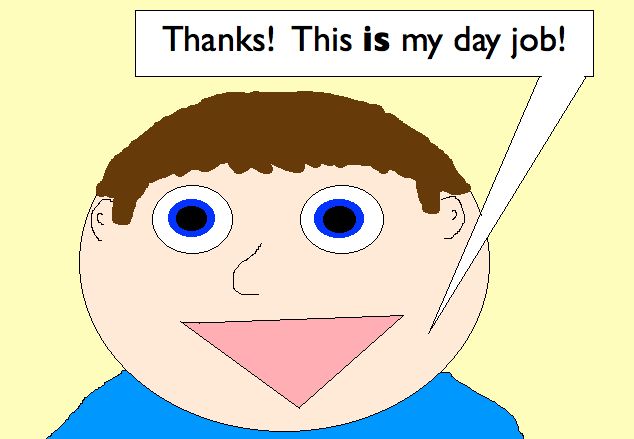 Ben's self-portrait (when responding to "Don't quit your day job.")

Ben Pernick was originally from Nanuet, NY and currently lives in Boston, MA. As of right now, he is in his junior year at the Berklee College of music, trying to become a professional ska musician (if his music is as good as his art, he’ll be the next Rebecca Black). He is also obsessed with cartoons (specifically Spongebob).

This webcomic isn't just horrendous beyond words. This webcomic is a hideous fusion of the worst comics on the BWW all in one foul-smelling pile of elephant dung. Ben Pernick has the maturity of Andrew Dobson, the attitude and effort of Tim Buckley, and a sense of humor as annoying as that of Ryan Sohmer. The art, however, is in a league all of its own. I have never seen a webcomic with such a drastic absence of talent, entertainment value, or effort. The only redeeming quality to this thing is, as I have said before, the title represents Ben's attitude toward the webcomic.

UPDATE: Fortunately this thing is off the internet. Yay!