Triquetra Cats was in the to-be-reviewed section of the BWW forum. Easy to see why.

The story is divided into fifteen "periods". Why that description as opposed to say, "chapters"? Maybe the female authors were having them as they were doing this webcomic? Who knows.

Period One:
Michael Jorgensen is a student in high school taunted for wanting to be female. Because of this, he visits Mr. Yanatis, a guidance counselor who arranges for Michael to get professional help. But just as Michael leaves school, he runs into some thugs who want his ring, and make two attempted physical assaults upon his person, but somehow they fail completely. Michael runs home only to find his parents horribly murdered. He tries to call the authorities, but help has already arrived in the form of Gemini Silver. She is part of a secret agency known as SERVICE, and evidently so is Michael, albeit unwittingly. Michael sleeps and has a strange dream, then awakens and finds Gemini has changed into Gemini Gold. He also has to dress like a girl, change his name, be taken to SERVICE headquarters, and get introduced to his sisters.

Confused? Here's what Jessica Raven herself has to say:

"Triquetra Cats was originally planned as a soapbox comic, the good guys were going to be some underground LGBT freedom fighter movement and the bad guys were gonna be 'teh ebil homophobes' I quickly realized how preachy and stupid this would have been and changed it"

But what about the sudden (and random) appearance of the panels with Japanese writing on them?

"yyyyeah....I'd rather pretend these don't even exist

do I speak a word of japanese? no

is Babelfish my friend? no

did I get called on for these? oh yeah"

This will be covered further in the "Writing Review" section. In the meantime, let's move on to...

Period Two:
So what's the story with Rain's sisters? Blaize used to be a boy named Jason, a high school basketball champion. He is at a postgame victory party when bullies crash it. Jason fights them off, but later walks into trouble on his own accord. And guess what happens? Yep, down to the same recurring dream that Michael had had.

Period Three:
And the third sister, Petra? Recurring dream, check. Student in high school, check. Failed attempt to retrieve the ring, check. One of the villains being the school principal... Well, at least that was a surprise. Fortunately a SERVICE agent rescues her. But what sort of villains are SERVICE up against? Very nasty, but also very stupid ones.

Period Four:
Our three heroes are prepared for their new lives and careers, then they receive a final broadcast message from their possibly-deceased mother.

Period Five:
Rain goes on an unauthorized revenge mission against her adoptive family's murderer before being found again by her sisters.

Period Six:
Our heroes get issued... kittycat costumes (actually, special armor suits). Their first mission is to stop a mass slaughter by the Hand Of The Dragon clan, and capture at least one of their members alive. Of course, they also have to keep the general public safe in the process.

For those interested, the authors explain how the comics are created, starting here.

Period Seven:
Our heroes are given a SERVICE-provided apartment to reside in... but they still have to enroll in a regular high school. (Yo, an agency like SERVICE couldn't just provide them with private tutors? I guess it's just a pretext to provide "odd people in high school" jokes.)

Period Eight:
Back at SERVICE headquarters, Petra accidentally discovers a strange being and snares it. Said being turns out to be a half-demon named Vyolette, the child of an evil demon king and a human mother. Vyolette had been raised by our heroes' mother and has resided all her life at SERVICE headquarters, but the staff of SERVICE still regard her with mistrust. Our heroes suddenly have to go on a mission to attack another clan, bringing along Vyolette, who is proven to be trustworthy after all and is finally accepted. But even a half-demon must go to high school as well.

Period Nine:
After a series of cases of people being mauled in alleys in Tokyo, our heroes are brought in. Werewolves are believed to be the cause of these incidents, and our heroes are ordered to use this method to deal with them. Trouble is, the supposed werewolf was actually a prison escapee from an alien world, and has to be dealt with differently. Our heroes subdue him and the period ends with an explanation of legalities.

Period Ten:
Oooh, talking about religion now, or rather the fact that God doesn't have a gender (Why the term "God/dess" then?). Then the sisters gather together and each one discusses their respective childhoods and what it was like for their adoptive families.

Then things abruptly come to a halt. End of webcomic? Nope, after quite a bit of filler, it resumes. And stops again. And restarts, and stops, and starts, etc. etc.

With all these interruptions, the flow of the story is completely ruined. It's like watching a movie where the projector keeps breaking down. The atmosphere is spoiled, and it makes it impossible to keep track of the storyline (and the storyline was a stinker anyway). I did skip-read through the rest, but while the art slowly improved, the writing did not.

At the webcomic's beginning, it's positively atrocious, like someone who has hardly learned how to draw. How bad? 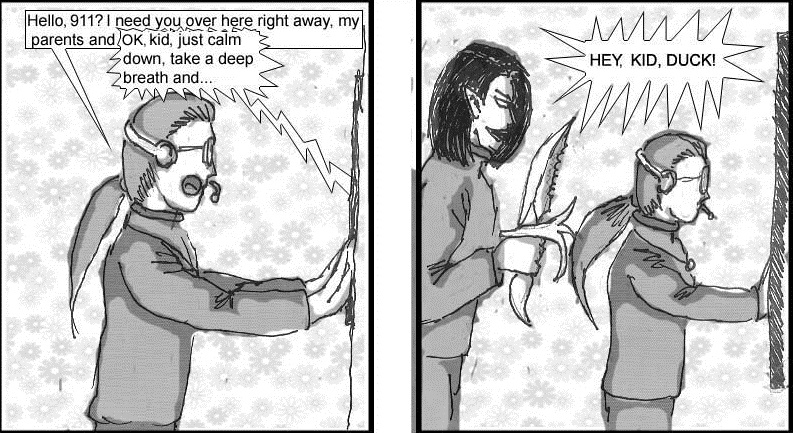 Black and white drawings with some shading, with occasional crudely colorized pictures for title pages or special announcements. Linework is crude and scribbly, proportions and perspective are very inconsistent, figures are very stiff, and urk...SIDE MOUTHS! Bad enough on funny animals, even worse on humans. Backgrounds and most props are copy pasted pictures, and even those are poorly done.

As Triquetra Cats proceeds, the art does improve, but it only gets to the level of passable rather than actually good.

The art after five years of practice.

Linework is much more refined, proportions and perspective are much improved, and there is now some flow to the action rather than the stick figures of before. Certainly an improvement over the webcomic's initial artwork, though still not too great. Faces are still sometimes unbalanced and out of proportion and almost everything besides figures are still copy pasted pictures. However, they are at least done better. Triquetra Cats's artwork does get markedly better as the webcomic continues. Which is more than can be said of some other webcomics reviewed here, such as 21st Century Fox or Namir Deiter, both of which have had longer runs and less (if any) artistic improvement.

Triquetra Cats, as the authors confessed, was originally meant to be a story about boys suffering gender dysphoria, meaning they mentally wanted to be girls. Then the story is abruptly transformed into a weeaboo action-adventure where it turns out that there were three little girls who had been changed into boys and sent by their mother's employer to live with adoptive parents, then when the forces of evil locate them, their mother's employer reclaims them and reverts them into girls. But why were the baby girls even changed into boys to begin with? So the author can keep the subject of transgenderism in the webcomic, and bring it up when convenient.

As mentioned previously, Triquetra Cats tries to imitate a Japanese manga comic, even to the point of putting in Japanese language panels. That preposterous idea was soon abandoned, but the comic has manga jokes such as adding "-U" to sound effects, for example: "SHOCK AND AWE-U" or "BARELY DODGE-U". Har-dee-har-har. Also, the protagonists, as boys, have Western names, but are given Japanese family names when they become girls, and they go to Japanese-named schools. And the characters don't look like Asiatics either. Is this supposed to take place in Japan, and are the characters supposed to be Japanese? How do real-life Japanese regard transgenderism anyway? They do marginalize homosexuals; I've looked that up.

There are other flaws, such as numerous walls of text, sometimes unreadable writing, and poorly-depicted and overlong action sequences. As an overall story, it repeats itself, moves rather slowly, and has illogical elements such as our heroes being sent to a regular high school even though they are employees of a super-secret organization, and monsters who are such bumbling buffoons they could have been taken down by Barney Fife. 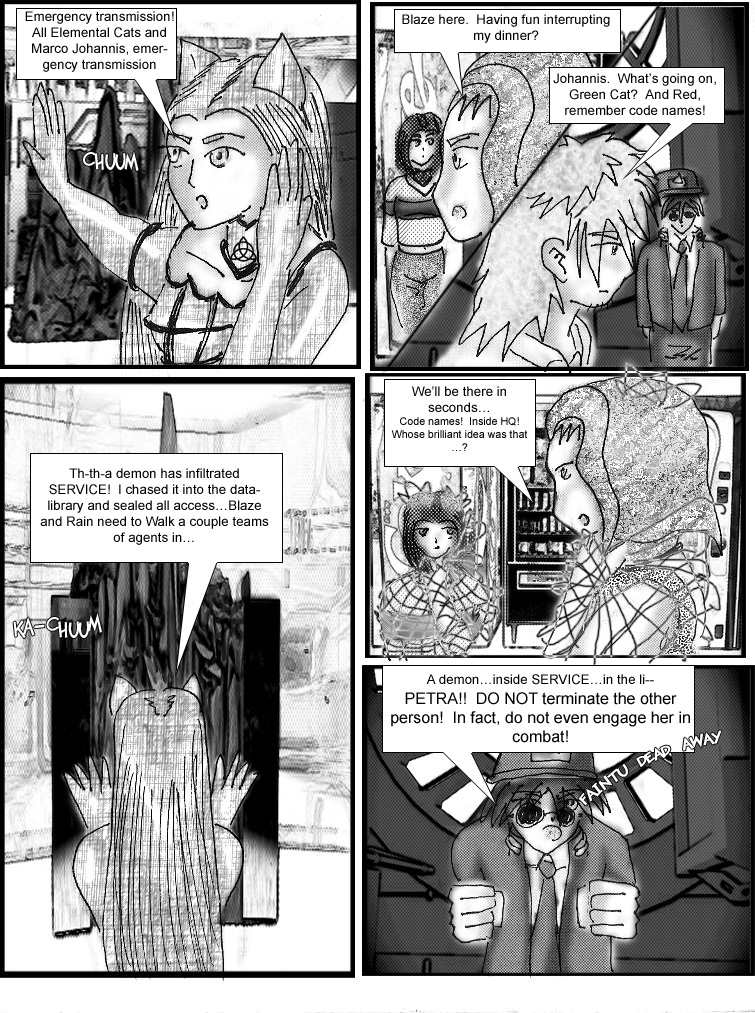 Overall, the authors came up with a webcomic that they really didn't know what to do with once it got underway, and it shows.

Nothing besides the links already provided.

The art does get better; perhaps the authors could potentially come up with a better webcomic as they get more experienced, and in fact they have other webcomics going on as I write. But Triquetra Cats is such an amateurish piece of crap that the authors would do best to delete it. (They did. Yay!)