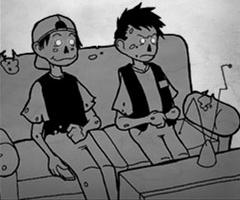 Zombies aren't funny. They may have been back in the early 2000's, but they aren't now. Zombies are hackneyed and passé. Basing an entire comic around the concept of "zombies, lol" is not a good idea, but The Zombie Nation does just that. That's why it's here. It's a comic with a one-joke premise, and it's not even a good joke. It's a joke that's been old since before this comic got started in 2009, and it's the joke that this comic has been running into the ground ever since.

The comic starts with an overly-long series of single-panel gags, most of them consisting of Left 4 Dead references or "some celebrity as a zombie" gags. See this article I wrote for an explanation of why references should not be considered a form of comedy. After literally 37 pages of this, the actual comic finally starts, and this is the first strip:

So that's it, the very first strip is when the comic started to get bad. Please see my article again for an explanation of why random humor should not be considered a form of comedy.

It's about two drunken, lecherous, homophobic brothers named Romey and Lovecraft. They look like children, but this is largely due to their boring, generic cartoon designs, and they're actually grown adults. They get turned into zombies, then they have WACKY AND RANDOM misadventures. There's also a guy named Richard Moon, who gets turned into a zombie by Lovecraft, then moves in with Lovecraft and Romey after his girlfriend kicks him out.

As I've described them, Romey and Lovecraft are obnoxious, womanizing, fratboy types. Moon, on the other hand, is their whiney, nerdy punching bag. His gimmick is that he's a total sexual deviant. How original. All three of these characters are completely unlikable.

The comic attempts to have some semblance of a story when Lovecraft learns that he has to pay taxes to the "Zombie IRS", prompting him to go get his old job back. Suddenly, his klingy, abusive ex wife Sheila shows up for about three strips, then she just leaves for no reason. The story then stops almost completely for the next two months to give us a fucking maelstrom of unfunny, single-panel gags before finally picking back up with the gang getting menaced by a group of zombie hunters, and we're occasionally menaced by more one-panel gags. The next thing we know, Lovecraft has been kidnapped by Sheila, and then we get more fucking one-panel gags, and this is the point where I gave up trying to read this thing.

We're informed of the main characters' names in the clunky fashion preferred by hack writers everywhere, wherein the two characters simply say each others names while talking to each other, 'cause, you know, people talk like that in real life all the time, right? I don't know about you, but whenever I'm talking to somebody, I always say their name to them so they will know I'm talking to them, even though it's obvious that I'm talking to them since they're the only one around, and they always say my name to me when they're talking to me, even though I was just talking to them and I obviously already know that they're talking to me. All of my conversations are like that because, you know, my life was written by a talentless hack. I'm sorry, but that shit really bothers me. I mean, if you really can't think of a less lazy way to drop the characters' names, then you shouldn't be writing.

But that's not the worst of it. The writing in this comic is horrible. I can point out the obvious grammatical errors and gags stolen from Futurama, but there's so much more wrong with it.

Here's the thing: in order for me to criticize the writing in this comic, I have to read the comic. The problem there is that the comic takes breaks every few strips to distract us with a series of unfunny, single panel gags. Most of them are just references to celebrities and Left 4 Dead. A lot of them don't even make sense. Here's an example featuring Right Said Fred as a zombie. What's the joke? Is it because he's a zombie, and that makes it ironic that he would call himself sexy? Is that it? Is that what makes it allegedly funny? How about this one? "I can has brains?" How about I can has FUCK OFF AND LET ME READ THE FUCKING COMIC.

Now if I can please stick with the main fucking comic without being interrupted every two or three strips, I can start pointing out how it fails to tell a story. First of all, if you've read the "Writing Review" section, you may have noticed another one of this comic's problems: a tendency to abruptly introduce new plot elements before casually dropping them to move onto something else. It's like Reid gets bored while he's writing and will just give up on one story arc to jump into another, then he gets bored of that and moves onto another. It's like the rambling, go-nowhere stories of Abe Simpson in comic form, starring two unlikable douchebags who just happen to be zombies.

Then there's the humor. The entire comic is centered around the zombie gimmick. Any time the punchline doesn't have something to do with eating brains or body parts falling off, it's "everyday life but with zombies" bullshit (see the "Zombie IRS" thing I was talking about above). This shit gets really old, really fast. The Zombie Nation is a textbook example of why you shouldn't base an entire comic around a single gimmick. 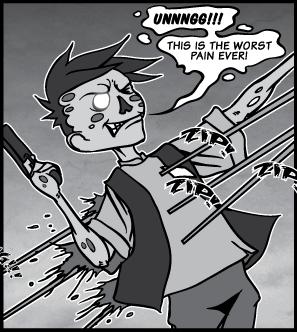 Then why are you smiling, asshole?

The two main characters look the same. They act the same, too. The only way to tell them apart is by their clothes. Seriously, if Romey didn't wear a hat, I would not be able to distinguish him from Lovecraft.

Another thing is the expressions. They're terrible, and they rarely reflect the emotions the characters are supposed to be feeling. Part of the problem is the way Reid draws mouths. It's like he doesn't know how to draw anything other than smiles, so whenever he tries to draw a grimace or a scowl, it just comes out looking like some kind of trapezoid. It gets worse later when he starts drawing them going off the edge of their heads.

The thing is Reid can draw, but when he does the comic, he decides to half-ass it. It's like he just throws out all of his knowledge of anatomy and perspective and gets lazy, resorting to copy/pasting.

Another thing I've noticed is that most of the female zombies don't lose their noses, even though all the male ones do. Does letting the women keep their noses have something to do with making them more attractive? That's fucking disgusting.

I don't know anything about Carter Reid and I don't care enough to look it up. Here's an hour-long interview if you're interested. I didn't sit and listen to it, but I skipped through it and found out that he shits out his sketches in ten minutes (around 21:30).

Imagine that you're watching a really bad TV show, like a sitcom featuring two unlikable characters and a plot that feels like it was thought up while they were shooting and had no script. Now imagine the show taking a commercial break every thirty seconds, and even though every commercial is different, they're all advertising the same thing. It wouldn't take long for you to start to wonder, "why the fuck am I watching this?" That's what reading this webcomic is like. If it weren't for the one-panel gags, I might actually be able to sit and read it, and I would simply call the webcomic boring and move on.

The only reason I even decided to review this webcomic is because it was on our to-do list and it looked like an easy target. I thought it would be as simple as "it's stupid frat boy humor with shitty art. Next." But it's frustrating. Normally, I don't get mad at a webcomic unless it's outwardly offensive like Greg or God's Story, but reading this webcomic is like getting repeatedly punched in the face with the same joke over and over again. I couldn't even get through the first year's worth of strips.

I hope I never see this webcomic again.