From The Bad Webcomics Wiki
Jump to navigationJump to search
OK, I will be progressively working on fixing this up and eventual submission for assessment as to whether it makes the grade and if not, I'll keep at it until it is. Going by progress so far, though I'm periodically going to keep working on this, initial submission might not come before 2019.

I'm moving a copy of this before I lose it, especially the parts that have been cleared (and especially because it took a long time to get this much done). I'm going to try and get the rest of this up to speed and a full passed in all sections by the end of the year by using the detailed notes from here.

After I first found my way here, I stumbled across 910cmx (there's been a relatively recent systems crash so all the old forum content is presently lost) and when you pull on a thread like that, all sorts of things fall out. Now this isn't part of 910cmx but things adjacent to the chasm can also fall in when you dig a hole in the first place.

I would say the immediate downfall is the section that runs from Image 97 to Image 108. It runs through a remarkable number of stereotypes as well as stopping the main storyline dead. It's a weird gag that finds our main character suddenly thinking that now he turns into a woman once a month, he's got to start wearing distinctly female attire when that happens. This whole sequence causes some serious tonal whiplash as it doesn't fit with this ongoing increasing desperation to find a cure at all.

Seriously, there's such a thing as unisex clothing or you can actually still keep wearing guy stuff, you know. Just do better in future, regardless of whether you're male or female (like dress more neatly) and run a comb through your hair for once. It's totally unnecessary to the main story and never comes up again in any meaningful or useful sense again. It really should have been discarded.

There's also the overall problem with the story which as said before, is Linus behaves in an illogically illogical fashion. It could be basically summed up as saying his attempts to convince people of his predicament are obviously completely back to front. It stands to reason even before the event that you're much more likely to succeed if you show people then tell them than the other way around. The story really gets this back to front and there's no credible explanation as to why he does things this way. 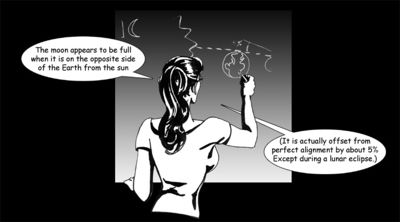 The art gets the job done with a minimum of fuss ... 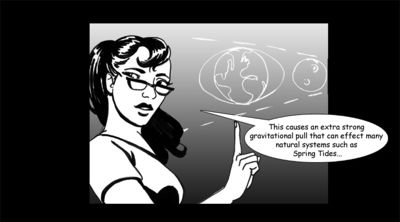 ... and it's educational too! (the panel before this one says this phenomenon is called Syzygy. Handy extra weapon for Scrabble at the very least.)

The art is credited to A. Gwydhar Bratton. This atmosphere of this webcomic I think really does benefit from being done in black in white. It also concentrates on the action it wants you to focus on as opposed to excessive background detail, I think it benefits from the relatively minimalist approach.

The main characters features are clearly differentiated from each other and recognisable for the best part and such things as Linus's neurotic nature and even more so his understandable awkwardness as 'Lindsay' come across in the way the postures of the characters are illustrated, Suzie's near perpetual annoyance and Morgan's confidence at the start when first encountering Linus and the contrast seen when their earlier confident persona is thoroughly broken at the end. Each character is clearly identifiable and for the best part, consistently so.

Except, that is, mystifyingly for Linus's best friend Brian. Who looks like several different people, sometimes from one panel to the next. He definitely doesn't look like he did at the bar scene at the start once that sequence is over. A real puzzle especially when compared to the other characters, that one is.

I mean does this guy on panel 2 and panel 4 look anything like this guy or this guy or this guy?. How about this guy?. That's just some of the highlights along the way. There's more where those came from too. Maybe the artist was bored and figured as a walking stereotype, this might make him more interesting? As it is, he undergoes more changes in appearance than the main character or anyone else we see with the actual transformative condition.

There's four main characters in this story and they're reasonably well delineated for the best part but there is the problem that their representation does tend to be overpowered by their dominant characteristic as follows: Linus - insecurity, Brian - cluelessness, Suzie - irritability, and Morgan - hedonism.

Linus: Incredibly nervous, anxious, and terribly insecure. Not exactly quick on his feet, either as he demonstrates over and over again. It would have been nice to have seen more sides to him that his being perpetually on the edge of a nervous breakdown but that doesn't really come until the end when everything's about as resolved as it's ever going to be.

Also a colossal dork best summed up as seen when he first finds he's changed here (if you'd like to see how that scene might play out in live action from this unrelated but thematically similar TV show from the first few minutes of this episode ...)

Brian: Means well but spectacularly clueless. Best summed up by even if it's unintentional when he knocks on Suzie for not being the first person to believe Linus even though she was the first person he told. As opposed to him who was the first person who did believe him. But prior to this, Brian had also just said words to the effect that you had to have seen it in order to believe it and that's precisely why he believed Linus in the first place. Well, I guess it's consistent with the expectations of that character. So, good job, I guess?

Suzie: Frequently seems to be angry about one thing or another. Understandable in retrospect given the run-around by everyone including some terrible excuses by Linus due to his disappearances and ludicrous on face value explanations from Linus-as-Lindsay. Turns out there's another side to her that probably actually what she's normally like when things aren't weird but we only really get to see that at the end. Would have been nice to have seen more of that sooner.

Morgan: Basically rebelling against their society which is to keep quiet and out of sight. How Morgan's situation is helped by repeatedly biting people is never really explained and we don't really see but of the character outside their wanting to find ways to entertain themselves. How this behaviour helps with even that isn't really all that clear, either. Flips from confident to broken after a group beating but doesn't really show much more than these two settings until the end.

The Werewives: Entering spoiler territory here but it is actually refreshing to find that even though there's ultimately a secret society of many such people, some born into it and some in the same boat as Linus, all trying to find the renegade indiscriminately biting them, said secret society's goal is not to plot taking over the world or any other nefarious schemes but simply to keep a low profile and not attract attention to themselves.

Joe the Barman is the most prominently featured of them as someone whose no-nonsense approach propels the story forward as needed and funnily enough, despite having inherited what's presumably the genetics for the condition, doesn't change due to some "hormonal thing" as this story straddles an uneasy divide between science and magic (and not always successfully.)

We see very little of the rest but that's OK. Even though it's about how Linus's world is turned upside down when he's unexpectedly thrust into their society, it's still his story, not theirs. We see just what we need to that's relevant to Linus. It's a good way to do it, revealing what we need to know as the main character needs to as well. We also see enough to clearly understand they run things with confidence.

I didn't find anything personally about two of the authors listed other than the index page saying that Ellen Schuler joined the writing team as of Episode 15 (panel 193). I don't know if that meant Michael Wakcher left at that point or not. I'm going to go out on a limb here and guess that A. Gwydhar Bratton (the artist) is the same person as the credit of "Gwydhar Bratton" as the third of the people named as a writer. You can read about her here.

The website itself, though still working does not appear to have been updated in some time as even the most recently displayed dates for news items and the likes are closing on ten years ago as of writing this.