The Wall of Text

“Wall of Text” is a name given to overly long or large speech balloons in a given panel, strip or comic. Walls of Text are often considered too slow for a given comic’s pace, too redundant to the situation and/or intrusive, since they take away space otherwise used for drawing. A Wall of Text is often pointed as a sign of both bad writing and lazy art, since either the author doesn’t know how to express himself in fewer words, or he doesn’t make enough drawings to pan out the writing.

In other words, think of that last paragraph stuck in a speech balloon.

A Wall of Text can be any such case where written words are either too redundant or intrusive in relation to the comic’s art. Sometimes it is very obvious, such as when a single speech balloon fills a considerable amount of space in the panel, making the art incomplete or blocked and the text too long or boring in comparison to the drawing. Sometimes, it is part of the comic’s style, like story plots that often require characters to engage into long conversations or speeches to get through the action.

Comics are a visual medium. A comic can consist of images without words, but no amount of words without images can be a comic. Hence, words are second seat to images. Most of us may know how to write and/or draw, but it’s a different thing to know how to put both together in a comfortable proportion.

The result is that many newbies (especially those who write scripts for others to draw) often have trouble grasping the relation between image and words. They often write redundant lines trying to explain the background (which we can see), over-explain or recap situations from previous pages (which we are supposed to piece together or remember) and have overly verbose speeches (which are out-of-character, boring, unnatural to a situation, or simply unnecessary).

Otherwise, a Wall of Text may simply be a comic or story that is so prone to long conversations and speeches that there are too many and too big blocks of text for the amount of panels and drawings. This can be said about any case in which balloons have to take half of the panel or actually peek out from them. Situations like this show a lack of understanding of visual media. If you’re going to talk so much, either draw more images to pan the speech out, or do something that gives priority to speaking (like audio or prose).

Why Is It Bad?

Comics have pacing. The flow from one panel to another is important, and you can see how different styles come with different pacing. From the fast manga pages to the densely packed British comics, it’s all built with purpose and technique. The important thing about pacing is that it must be constant, and the payoff must always be appropriate. If we are going at the speed we’re going, we better not hit speed bumps. And it better be worth it.

Like a storyboard, panels show every different action, pose and camera angle in a scene. When another person starts talking (except some short exchanges), when somebody moves, when something important happens, that's another panel. That’s how the action flows, and it tends to represent a certain amount of time.

To make a single or few panels where one character speaks a full paragraph means to the reader that, during a few minutes, absolutely nothing else happened. The speaker didn't move, the other person didn't react, the leaves didn't turn. No, the guy just blabbered for five minutes, with no sort of inflection or feedback. And if we add the previous definition, he wasn't even talking about something useful. He was just recaping, or explaining stuff we already know, or trying to spill his guts out to her girlfriend in the middle of a busy airport.

Look at any drama, movie or sitcom. Camera angles change every 5 to 10 seconds, and remember, most of these shows use only one camera to film. The editing and pacing in visual mediums is important to balance out the action with the calm moments so that we don't get bored.

But some guy giving a monotone speech, keeping you in the same page for several minutes? That must either be the most important speech ever, or the most heated argument. Otherwise, it’s just boring. Not characterizing, not riveting, not a story-building moment. It’s booooring. 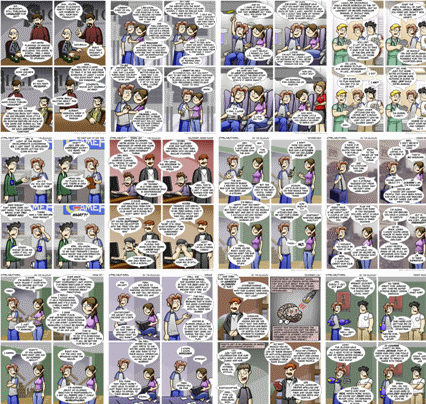 What would an analysis of Wall of Text be without Buckley’s crap-sterpiece? You can see so for yourself. Ctrl+Alt+Del can sometimes be wordy as fuck. Why? The “4-panel” layout is the classic system used for light-hearted gag-a-day comedy. Buckley used to do this when he started, so it was a safe fit.

However, a few months after his comic took off, Buckley changed alleys and started adding PLOT to his material. Whenever he wasn’t ripping it to a videogame, his characters had to build complicated situations and storylines do that Buckley could milk several pages of story to pass time during game/idea shortages.

If you come this conclusion, you will notice most of the wordiest pages come from “plot” comics. This is because the level of comedy and action Buckley ambitioned for wasn’t feasible in so few panels. It could’ve been solved using more panels, BUT NO. Buckley stuck to his 4-panel plan like a stigma. The result is that the pacing got screwed. Whenever he wasn’t trying to space out a 2-panel comic into twice the space (creating the famous CAD formula), he shoehorned a full page of dialogue into FOUR FREAKING PANELS.

Not only is the situation too complicated for 4 panels, but the speed he demands from the story arcs is insane. Normally, a typical Buckley storyline will have only one or two wordy pages at the start explaining what is going on. Then there will be a bunch of swift gag pages about the situation. Finally, the whole story will likely be solved in one or two ultra-wordy pages, where one or two characters will give an insanely long resolution speech. The other will then give a ridiculously short answer by comparison, probably because the text left him with no air to breathe.

Worst of all, these speeches normally have no punch line to end a page, so normally a short joke will squeeze its way to the last panel. So it’s a bunch of filler leading in to less than a one-panel joke. These things could be solved if they just went over several pages, over more panels to show more interaction and movement. But fuck that, Buckley’s bored already and he just wants to get this over with so that he can draw more goatse jokes.

The trend is horrible, recurrent, and has actually started to affect his one-page jokes. Currently, there are more and more examples of long and complicated setups for just a one-panel joke, like a tedious setup leading to just an image of an elf sticking his hand up an animal’s ass or far-fetched situations just to capitalize on internet memes.

Currently, there’s some hope. Some of the latest pages have been more creative with panel layout. But we might never recover all the lost time we spent reading the seventh word-a-thon on a page about why Ethan fucked up his relationship with Lilah for the seventeenth time.