Please note that this webcomic doesn't have an English version, and that all the images in the review are translations made by me.
-FernandoLemon

Right, so here's the deal. I was roamin' round the internets minding my own business, looking for webcomics to review. I came across a few, but found them being low-hanging fruit at best. Then I came across this one and decided, eh; let's roll with it. But I had a problem...

See, it turns out this webcomic is written entirely in Spanish; not like Mobius Adventure Comic though, where it's only the first half, no; it is legitimately written all the way through in good ol' hable español. So, I decided to find me some back up. You'll be seeing him in just a moment.

Downfall? Are you implying there was a time when this webcomic's flaws weren't on plain sight?

But now seriously, while this webcomic was mostly "bad", it goes to "horrible" in the second chapter when fanfic part kicks in.

Okay, quick introduction. Hello, I'm FernandoLemon. I decided to co-review this with Jacob because he doesn't speak Spanish. So, for any part of the review that's related to this webcomic's writing, you'll be hearing my thoughts instead. Now that that's out of the way, let us begin.

The story starts with narration explaining to us the setting: it's the future and technology is everywhere. Also, monstruous creatures exist due to experiments with animals in labs. Aliens exist too, though no explanation is given for that.

We then cut to two criminals named Beyase and Keiro escaping prision using their EDGY superpowers. The way it is drawn makes this scene boring instead of exciting.

Next scene we see a guy named Captain teaching the girls at the local school how to properly throw a javelin for the school olympics. He is then questioned by Vidalia (doesn't that name sound familiar?) about some girl named Sophia's whereabouts. Two more girls come to squee chat, one of them pointing out how he resembles his father. So, what's the story behind Captain's father? Considering this is the last time we see them, we may never know. So, in other words, this part was just a pointless waste of time.

With the next scene you will realize one of the webcomic's biggest flaws: the focus. It just keeps going back-and-forth between plots. Now, it's common practice for works of fiction, TV shows in particular, to suddenly divide the plot in two. The Simpsons, for example, has been using that particular trope for quite a while now. The reason why it doesn't work here is because it's trying to juggle six plots at the same time. And that's only for the first two chapters! The third one will probably only add more of them to the mix!

Anyway; going back to the story, we meet two new characters named Jeredy and Jon. Jeredy is staring at a mysterious diamond he found, makes some modifications to it via computer and it self-destructs and becomes EVUL!

And it's in the next scene where we finally meet our main characters, two superhumans named Jinja Morimoto and Hellen Parker who work for a company of some kind by fighting crime with their mahō shōjo powers. We also meet Sophia Suno, who is either the girl's boss and/or mother. They're talking about going to a mission in Moscow and it's all kinda hard to understand due to the poor grammar, so I'll just skip it. Then Vidalia comes in and talks to Sophia about Amethyst (yes, THAT Amethyst) and reveals Charlemagne's plot, who I'll assume is the local alpha bitch.

Finishing off this chapter, we see Beyase and Keiro again arriving to Zenith, the city where all other previously mentioned events took place in. They're looking for superhumans and, as far as I know, the closest they gave to an explanation is "to solve something", without telling us what that "something" is.

The second chapter begins with Sophia and Charlemagne meeting face-to-face and arguing. Charlemagne is going to retrieve her gem collection, and apparently this is all very bad because that would lead her to conquering the world.

And then... there's this scene. This is where all goes from "bad" to "shit". We see Amethyst for the first time, which starts the fanfic part of the webcomic. Why is that so bad? Because it's completely out of place with the rest of the world that was built. While it's true that Vidalia was also a Steven Universe character, she looks like someone who fits in this setting. Amethyst does not. You might be thinking to yourself "wait a minute, didn't you mention before that there were aliens?". Yeah... except that you would think they were human if you weren't told they aren't, because they look like this... Okay, let's just finish this before I get a headache.

Besides Amethyst, we meet Onion (who is by far the worst character because he contributes nothing to the plot other than being obnoxious). They're playing hide-and-seek before overhearing Sophia and Charlemagne's discussion. Amethyst then reminisces about her past, where she was an experiment in a science lab. The EVIL doctors in there need to fabricate a cure, so they make her laugh before trying to shoot her with a needle gun. She manages to escape, with the guards utterly failing to capture her, finds Vidalia's home, and starts living with her. Amethyst then swears revenge on Charlemagne.

Jeredy talks to Sophia about what happened last time we saw him. He is told by her that that the diamond was very likely made by Emmanuel. Who is he? Tune in for next episode, folks. We also get some exposition about how a superhuman's DNA denotes their morality (blue=good, red=evil; just as easy as the real thing!).

In the chapter's final scene, Hellen and Jinja go meet Indigo, another superhuman who has electrical powers like Pikachu, at a power plant. They have an argument but, again, it's boring and poorly written; so I just skipped it. Then Indigo tries to attack them, which leads to a face off and... that's it. There's a third chapter, but I don't want to look at this awful webcomic any longer.

I have a strict policy when it comes art. Three actually, which we'll see as we go along.

1. Stick with one tool and only one tool. I, for example, only use Macromedia Flash 8 for my pictures. It's a very nice, if somewhat outdated tool.

At first it looks fine, but wait, what's this? Why did the author use MS Paint for her backgrounds? Her characters are already drawn in Flash, so why can't she draw the backgrounds in Flash as well? What's stopping her?

Ok, so number one is a bit of a bust. What's the second one?

2. Don't have your characters be so similar to each other; unless these characters happen to be twins, there should be no reason for them to look the same.

Well okay, this seems nice. We're getting to see some of the characters and--why does everyone look the same, only with different hairstyles? There isn't any reason for that. I'm still trying to learn from this myself so I guess that can be forgiven. But still, this strikes me as a bit lazy.

So that was also a cross out on the ol' Soviet Army. Surely there's no way she managed to fuck up the third one, right?
...right?

3. Never EVER steal backgrounds. THIS is the big no-no. If you even consider the thought about stealing backgrounds from another show or comic, you will be committing suicide on your art career. 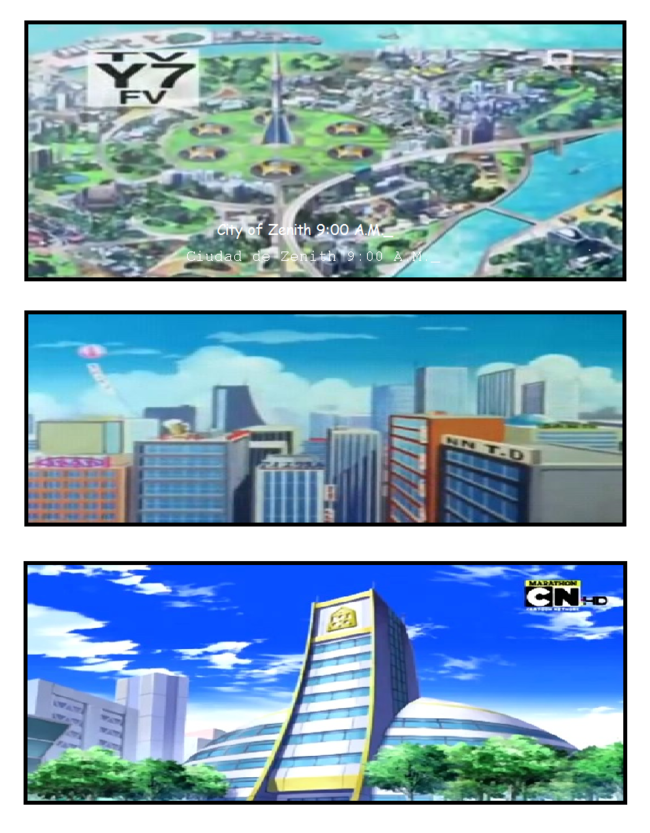 Leave it to you to give the double middle finger to all things related to art.

That's right, she blatantly took a background from some anime and made it the place where everyone lives. And she didn't even bother deleting the Cartoon Network logo in the third panel!

And if you think this is just a one-time thing where she did it to meet a deadline, think again. Throughout the webcomic, she's been stealing images from Bakugan, Monsuno and Steven Universe, just to name a few (because if I kept going we would be here all day long).

How do you do this? How can you be so lazy that you have to resort to STEALING others' pictures in order to get by with making this webcomic? You might be thinking that I'm overreacting with this; and in a way, maybe I am. But there is a law in virtually every single government in the world that explicitly states that you should not use someone else's work without the original author's permission.

If you had posted this on DeviantArt, you would have been called out on it by someone on there that clearly saw through your bullshit and, more than likely, gotten your image removed. That would be bad enough; but let's imagine the company that MADE the product you stole the backgrounds from found this. You'd better thank your ass that this is a very unlikely event because then you'd be in serious fucking trouble.

And just to add insult to injury...

Yes my friends, this is a true bang up job she did. You get the full five stars, 100% Approval Rating on the Tomatometer, 10 out of 10 from IGN and an instant 'Awesometacular' from JermeyJahns. Congratulations!

I'm gonna kick the elephant out of the room right away: the dialogue friggin' sucks. This shouldn't be surprising from a webcomic called "The Tomorrow Future", but you'll be astonished with how it manages to trascend expectations. This shit is a mess. All dialogue is unnatural and stiff, and sometimes it doesn't even make sense. Look at this! 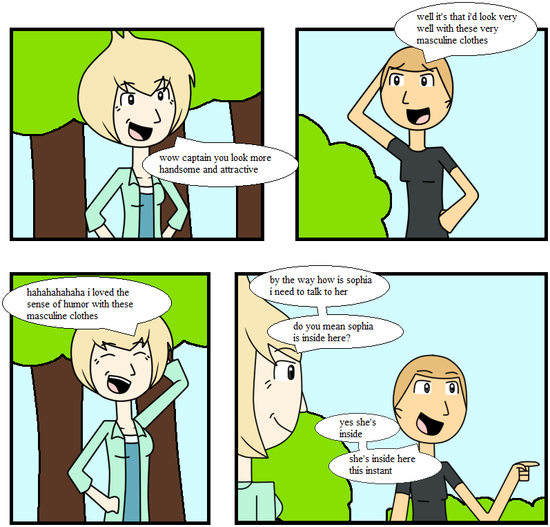 There is never any punctuaction; all sentences are one long mish-mash of text. There isn't any formatting either; the text's all written in Times New Roman, aka the default font (at least the people who chose Comic Sans chose something), and in lowercase. Now, imagine ALL THAT in Spanish, and you got the worst part of the webcomic.

Other than that, there's little else worth mentioning. The characters are boring or butchered or both, the story is generic and the fanfiction part is embarassing. But you already knew all that, didn't you?

This is what she says about herself in her blog:

So, in other words, she's Colombian. And not at all a teenager like we thought.

My guess is that she got in touch with art tools one day and decided "screw it; I'mma make a webcomic as my ulimate tribute to anime". Too bad that backfired horribly.

There isn't anything redeemable about The Tomorrow Future. The art is so lazy it can't be bothered to create its own backgrounds, its story is generic, the dialogue is an insult to the Spanish language and all the characters combined have less personality than a stone wall.

I strongly suggest the author reboot this thing quickly or, better yet, ask someone else to draw it for her. Hell, let ME draw it if you want me too. I could do a good job and at least make it look a little less same-face syndromed. I'll even work for free if you ask me to!