Oh boy wasn't that a wacky 'ol election cycle? And now let's all take a break and calm down by reading something unexciting...like this webcomic I stumbled upon in Comicfury, The Right Wing. 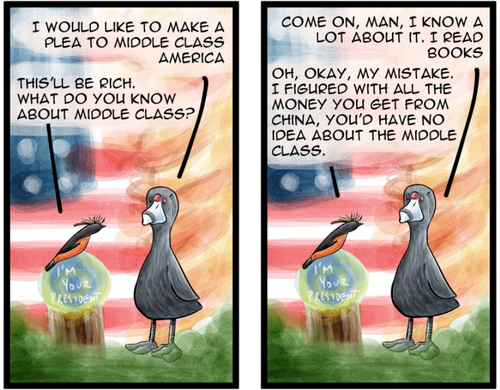 How is Trump better connected to the Middle Class? He was the son of a millionaire, never worked in any normal people job, never served in the military...

It was always bad. It's a never ending waterfall of lazy feathered strawmanning.

As you can guess, this webcomic is a political strawman, where political stances and real life issues are simplified, just scratching the surface. Maybe the other side is even misrepresented. I never heard Democrats complain about Barret adopting two black kids.

Of course this is just the nature of the beast. When you have four panels or less, then the best you'll do is make quick zingers or caricatures of people you don't like. The Right Wing comic fails to do either of those two things very well.

The "puns" tend to just be the author stating his own opinion over and over again acting as if they're facts, there's no strong sense of irony, no wit. Reggie does not want America's Historical bad side to be taught, Reggie hates the News Media, Reggie thinks Joe Biden is too old despite only being 4 years older than Trump, Tofu Joe is admitting the Democrats are big liars for some reason.

Many talking points are repeated in a monotonous manner, like Andrew Cuomo, the governor of New York state acting tyrannical. Or mainstream news being biased. Or there's Joe Biden being senile which has already been done in lots of other places far more effectively.

This parody of the Capitol Hill Autonomous Zone was almost clever, and actually made use of the characters being birds. Speaking of which....

I know world building isn't the goal of this webcomic, but darn, the comic starring birds is confusing and kind of gets in the way of the attempted jokes. There's a news network called BNN, which suggests they have televisions, so where do they put them exactly? The bird houses? Do the bird houses have electricity? Just how far does bird society and infrastructure go? How do birds hold things or operate machinery with feathers instead of fingers? There was a feeder with bird seed, did the birds build it?

And I think there's a little wasted potential with Reggie being a Cardinal, I wish there were references to him being Catholic, since the Cardinal bird was named after a rank in the Catholic Church.

What is this, a taxidermist's ventriloquist show? Move damn it!

This guy is a ludicrous comic making machine doing three to five strips a day. How does he do this? Easy, he just repeats the same images over and over again. The same panels, the same poses, they're all copied more than the Old Republic Clone Army! The art is quick and sketchy shapes of birds that are just recognizable enough, but the birds don't emote worth a darn. You can't see their eyes and their beaks don't open up, they don't move at all. This strip is simply a bore to look at. How can you feel the passion of the Righteous Republicans wrecking the Despotic Democrats when everyone is as still as a statue?

And Oh yeah, they've all been digitally made since strip #66. In the first 65 strips it was photos of the comics in a scrap book, inked by hand. Mostly it was repeat imagery, but they did occasionally move a little bit, like in this strip.

A complete mystery. The author of this comic is only credited as "The Right Wing Comic" or "The Right Wing Co 1". He's on Comicfury, Twitter and Parler. On strip #700 he had an art giveaway, that was nice of him.

Facsinating, this comic created itself.

This is certainly a case of quantity over quality with three to five strips a day. Even if he did one strip a day, or better yet, three strips a week, he'd still be relevant enough. He could put more quality in the art and writing, make it something more fun. Make each strip its own distinct adventure to be cherished. But this comic ain't likely to do that, so screw it.