I heard about this comic from the Heartless Bitches website and wanted to see if it was as bad as they said it was and they were right.

Pretty much from day one.

You can just tell that Watts probably doesn't like women with the way he draws them because you can just sense shallow, air-headedness that is dripping from every pore from their blank stares and creepy smiles. Hell, there's times when they practically look like blow-up dolls. Not that his men are any better. Other than Jeff (the main character) and Frank, most of the men are drawn as big muscular evil jock stereotypes. Watts has next to no idea what shading is, the faces are ugly, the anatomy is off and the coloring is sometimes so fuzzy that it looks like he used the Paint Program. Watson was brought in later on to do the coloring and he's a little better than Watts. He actually does some shading but the colors are still very basic and bland.

This is where it gets really annoying. Because all NGC is, one big whinefest about how all woman are stupid, shallow bimbos who only want to date jerks/himbos (AKA any man who can get a date) and not "nice guys" like them. And there are also a good number of geek references.

Man, I've read Cathy comics that whine less than these guys. Boo-hoo. Women don't appreciate me even though I never have the guts to tell them I'm interested in them and don't really try. Wahhh! They only want jerks who treat them bad despite the fact I'm using friendship as a way to get into their pants. Not to mention that I go after women who are already taken. Ahhhhh! Women suck! I'm going to drop all you Ameri-skanks and get me a mail order bride from some third world country who will worship the ground I walk on until she wises up, finds out that I'm not the CEO of a Fortune 500 company and dumps my ass. Wahhhhh!

Yes, I know that there are stupid women out there (look at all the fangirls serial rapist and murderer Ted Bundy had), but these guys just seem to have it out for all of them. Every woman is a foolish bimbo or a screaming bitch and sometimes both. 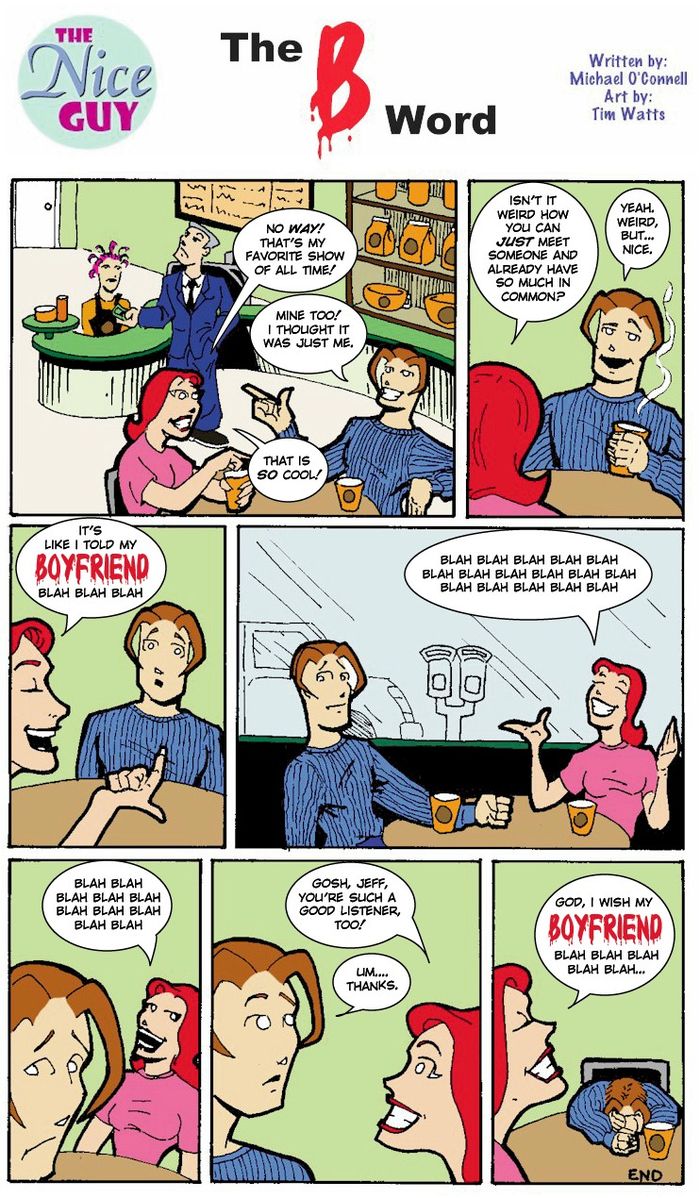 Why doesn't this guy just find a prostitute instead?

Now before any "nice guys" complain that I'm a lookist bitch who only wants jerks, let me tell you something. I have a special place in my heart for lovable losers from Glass Joe to Leisure Suit Larry. But there's a difference between lovable losers and "nice guys". Lovable losers try their heart out even if they screw up or get laughed at, they try to not let the crap in their life get them down and even if they're in a situation where they might not be comfortable or it's something they're not into they usually attempt to have a good time or at least tolerate it. "Nice guys" expect the object of their affection to read their mind and come crawling to them after she suffers from one too many jerk boyfriends instead of take the effort to admit their feelings, "nice guys" are whiny little pussies who will love to mope to whoever will listen to them even if they're busy doing something else and when everyone else is having fun and it's not something the "Nice Guy" is normally not into or he'd rather do something else (like whine about his object of affection) he is a total wet blanket. What girl (and probably most gay/bi guys) wants to date that? I'd sure be bored to tears with this not-so-lovable loser. Even when they're not whining about women, the jokes still aren't funny.

Self-proclaimed "nice guys", both O'Connell and Watts decided to put this comic together to express their frustrations and hope that it can be made into a movie or TV show. O'Connel is trying to get screenplay drafts published while Watts claims to have worked in the comics field as an inker (but I haven't found anything about which ones).

And if either O'Connell, Watts, Watson or any other "nice guy" is reading this let me tell you something: stop your bitching, grow-up, treat women like human beings and not something to put on a pedestal and have the balls to put the moves on us because we aren't mind readers and trust me, you sure wouldn't like it if we were. Sure that would mean losing your audience, but it might make your comic somewhat entertaining.