The Magnificent Milkmaid was in the to-be-reviewed section of the BWW forum. It was produced by White Lightning Productions, the same outfit that gave us Peter is the Wolf, but is actually far worse.

There's an introduction sequence starting here, and then the webcomic begins with Chapter 3. Why no Chapters 1 and 2? The WLP Wiki (while it existed) told us that The Magnificent Milkmaid actually began as a print comic, and that Issue #1 of it sold enough copies to pay for its print run, but Issue #2 did not, and the decision was made to continue the story as a free webcomic.

So who is the title character? She was described in the White Lightning Productions Wiki:

Beth Dorman, student first at Woodville High School and then at Gazonga State University, lives a double life. With a taste of milk she transforms to fight crime, evil, and sexual frustration as The Magnificent Milkmaid!

And who and what is she up against?

Details on the first time Beth Dorman transformed into the Magnificent Milkmaid may be found in The Magnificent Milkmaid #1. Realizing that with great cleavage comes great responsibility, she began using her powers for good, fighting the superhuman sex freaks who seemed to appear at random around her- often from her own circle of friends. Initially she had no idea that their transformations, as well as her own, were the result of Dr. Emil Papillandrou's experiments to create the ultimate sex slave.

And how does she go about it?

Chapter 3: Right off the bat her powers are utterly useless and Beth ends up having to "think milky thoughts" just to make it through gym class. Unfortunately, doing so has the embarrassing side effect of making her always want to jerk off. Uh, oh, Dr. Emil Papillandrou is hatching another nefarious plot, the victim being a girl named Karen Matthews. And the result? Karen finds a boy she desires dating Valentine Cole, a rival of hers, and she transforms into a tit monster. Karen then confronts Valentine and a catfight ensues which involves boob-fighting (I am not linking to any of that). Beth arrives to intervene, then a nerdy guy called Edwin steps in and reveals his huge penis (evidently Papillandrou worked on him too), and he and Karen have very messy and disgusting sex, witnessed by the whole school.

Chapter 4: Serafina Dangelo's mother wants her daughter to have a boyfriend, and grandchildren as well. In school later that day there is another catfight over who is dating who, and Serafina gets upset by it and runs outside and... transforms into a fucking bodybuilder in drag. Beth follows her, and there is the never-answered question of who Serafina has turned into. A female Incredible Hulk? Wonder Woman? No matter, a lesbian scene threatens to occur between the two, but Serafina's mother suddenly arrives, and everything is calmed down. Yes, Dr. Papillandrou has again failed to create the ultimate sex slave.

Chapter 5: At a drive-in movie theater (yes, they still exist), Beth and her boyfriend are lovemaking, and are having more enjoyment than some of their friends. Unfortunately, Chastity Anderson has an even worse time with her own date Kevin, who tries to rape her (what's worse? "serious" rape plotlines in webcomics or rape-fetish plotlines? I can never decide). But Chastity soon makes him regret his bad intentions. Meanwhile, Dr. Emil Papillandrou has gotten fired from his post at the high school. Is this the end of his evil schemes? Meanwhile, Chastity uncontrollably changes into a girl-monster herself, and a classmate sees her and does the same. Beth sees this and tries to save the day by transforming into The Milkmaid, but cannot do so because she cannot find any milk to drink! Oh, dear, now Serafina transforms as well! And Martina Stevens deliberately turns herself into a werewolf (I guess whoever is making this isn't over his old fetish yet) and joins the fray. To top everything off, some of the female characters sprout penises (but not testicles), so now we have chicks with dicks! Being completely helpless to do anything, Beth flees, and then her mother arrives, and... well, even the characters admit that this whole chapter has a really stupid ending, and I'm not going to bother describing it. Look at the damn webcomic yourself if you're curious.

Chapter 6: Dr. Emil Papillandrou has not given up on his experiments after all. Meanwhile, of all the girls who transform into monsters, Chastity is proven to have the worst monster form, and that form is known as Prixen. So what does Beth try to do about Chastity's problem? Evidently, some sort of intervention where she tries to get Chastity to learn to prevent her internal monster from emerging (by molesting her, what else?). Is Beth successful? To make a long story short, no, and it takes another grotesque sex session between her and Prixen to calm everything down. And on top of that, Beth's mother pokes her head in because she is an even bigger sexpot than anyone else in the story-and she wants to be involved in the sex between Chastity... and her own daughter. Fortunately Beth manages to make her mother go away.

There are also several side stories and one-shot strips, but I'm not going to bother covering those. And what about future plans for the series? From the WLP Wiki:

As of January 2012 all future Milkmaid releases were expected to be either subsidy comics or digital downloadable comics, not free webcomics. Plans are in the works to reprint Milkmaid in graphic novel format.

I'm not holding my breath.

Rather crude animu monochrome artwork with little shading or depth, wonky and uneven proportions. Not that it really matters; the whole webcomic's premise is to depict breasts swelling into massive jugs and massive penises sprouting on both guys and girls and sloppy sex scenes, and anything else is just filler material. Two different artists have done the webcomic version of this story, but while their art styles are different, they are simply two different versions of mediocre. 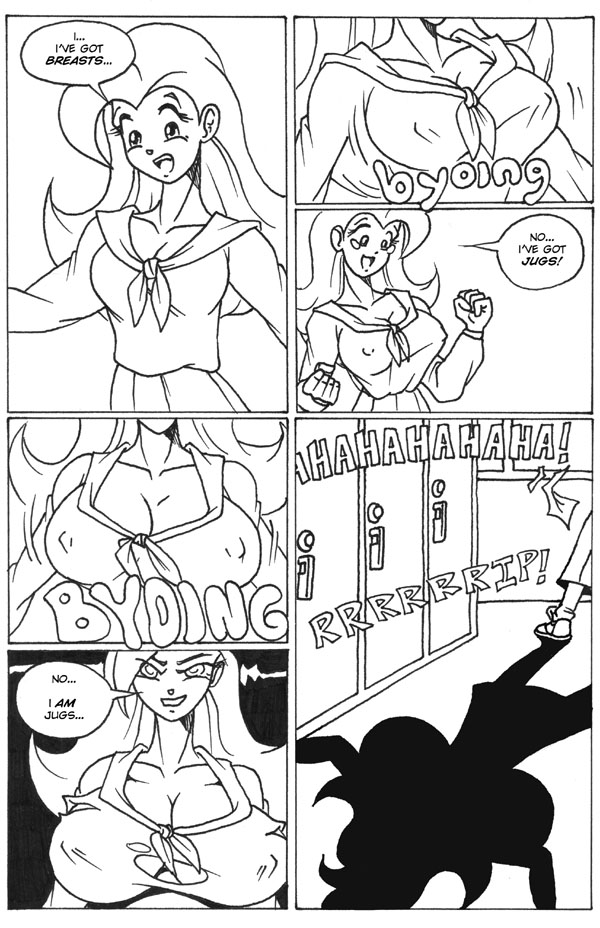 Prodigy Duck's artwork, showing a very common type of scene in this webcomic. 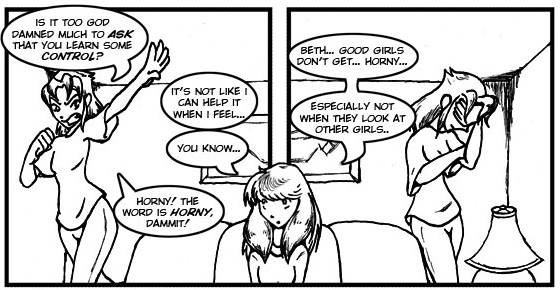 Mune Sol's go at it. Different, but by no means superior.

The Magnificent Milkmaid is written in a deliberately campy style, with cliched elements such as a mad scientist and his annoying assistant, and young cheesecake girls who become victims of his nefarious schemes. If the author had actually tried to make the webcomic entertaining, this whole thing might have worked.

When you think about it, Dr. Emil Papillandrou is ostensibly trying to make "the ultimate sex slave", but what exactly does he mean by that? Every time he creates another of his sex monster girls, they don't exactly fit the standard definition of "slave". They turn into the opposite-wild uncontrollable creatures who attack other women, and who are far more likely to scare away boys than attract them. I mean, how many boys are attracted to dickgirls? The whole concept of this webcomic makes no sense at all.

You can find plenty of information on everyone involved by clicking on the WLP Wiki link. Scratch that, there is no longer any WLP Wiki, which is just as well.

The best thing that can be said about this webcomic is that at least it is open and honest about being pornography, unlike some webcomics, and gives you plenty of warning of what it contains if you happen upon the website, unlike other webcomics. And it uses humans instead of anthropomorphic animals-unless you count Martina Stevens, who sometimes turns into a werewolf.

The argument might be made that this is supposed to be a parody, but there are too few jokes and too many grossout sex scenes to make that claim valid.

You want pornographic humor with an 18-year old protagonist? Go buy an issue of the Cherry comic book series instead. The humor is probably better and the artwork certainly is.