Like many other webcomics, both bad and brilliant that I have discovered, I found The Invisible Skein on the White Chapel message boards. It was several months, I believe, before the official start date of the webcomic when mister Glover began to pimp the webcomic, since no actual pages had been posted yet I had to settle for some incredibly bad promo art and a cafe press store front. That's right. A Cafe Press store front, filled with fucking shit, for a webcomic that hadn't launched yet. Talk about crass. I couldn't read word one of the story but I could buy mugs and thongs and fucking playing cards with the webcomic's logo plastered all over them. I was disgusted, I was intrigued for the webcomic to start, and for it to finish, so I could rip it apart.

Well after months of waiting for the story to begin, December 12th rolled around and the first page went up, along with a promise of four more pages that week, and three pages a week after that. Let's do a little math: 5 pages the first week 3 each following week, 24 pages of story. It should have taken just over 7 weeks at that publishing schedule to complete the story. So two months. Here we are on 05/18/10 as of this writing and the first chapter has just completed....23 weeks later. 24 total weeks to tell 24 pages of story.

Now that's fine, if that is the pace you set out to tale at, and to be fair the publishing schedule was adjusted to lower rates officially several times. But this wasn't the pace we were promised and it wasn't actually a steady 1 page a week either, it was a flurry of pages in the beginning followed by several months of no updates, then a few pages, more silence, and then the final pages. Professional guys, real professional.

But now the first “issue” is done and this review can begin. So let's Begin.

This webcomic sucked before it began, weak premise, no interesting characters to speak of, terrible promo art. Hard to have a fall when you began at the lofty height of worm's shit.

The story of The Invisible Skein centers on Robert “Digger” Deveraux, and ex-FBI agent, agoraphobic hacker, and Ali Leighter, his blue-haired, blue-tooth sporting, short-skirt wearing, field agent. According promo material, Deveraux (“know on the [puke] 'Net as the [puke]enigmatic [puke] Digger.”) was an FBI agent until they tried to kill him for knowing too many secrets. You see, he knows the truth about crop circles and shit so they had to kill him, and they failed but now he is an agoraphobic shut-in so win/win right?

Not So! No, the Digger wasn't contented to sit in his house, head full of secrets, and do nothing. So he, presumably, hired Ali from whatever Hot Topic she used to work at and sent her off to Iowa to look for aliens. Ali isn't prepared though because she was too busy fucking some dude on the plane (Digger knows the true secret of the Mile-High Club too children) so they have to give us some exposition dialogue over blue-tooth headsets. And I have to punch myself, hard, in the crotch.

Anyway, Ali then goes to see the cops, who turn out to be fuckers, and then there is a fake alien, and Ali is forced to run from the cops in her underwear, and then the comic ends making noises about Roswell, New Mexico. No character growth occurs.

Ugh. The art. Fuck. It's really bad guys. Let's break it down into three parts:

Our Artist, Amanda Hayes, can barely draw. She has no real understanding of anatomy, perspective, lighting, story-telling, or panel composition. Every thing is flat, and angular and boring. Backgrounds are so minimal as to be non existent, and every character has the same facial features. Let's take a look at a specific example. Now the writer of the book was good enough to post some of his terrible script online, so we can compare what he wrote against what she drew.

Here's what he wrote:


The voice from the other end is Robert, our other hero. The occasional inset panel will reveal him in front of a row of computers, each displaying

something different, maps, lists of names, mathematical computations, etc. He’s wearing a full headset. The room appears to be mostly dark, think a

cross between a government board room and the batcave.

And here's what she drew:

Now what he wrote was bad, and cliché, and stupid, but what she drew was worse. If I had written the above description and the artist turned that into me, she would be drawing it again. He calls for a row of computers, each displaying some different cliché crap; she takes him at his literal word and gives him an actual row of computers (instead of what he probably meant, a single computer with several clustered monitors) spaced well apart from each other, each with their own mouse and keyboard, and none of them displaying anything on the monitor. One of them does have a post-it note on it though, so – great job there. Maybe ex-FBI hacker-diggers like having lots of separate computers - instead of one powerful machine with a single input system and multiple monitors- for some reason, I don't know, I am not an ex-FBI hacker/digger. K Patrick Glover goes on to say that the room that Digger is in, is like a cross between a government board room and the bat cave; and she draws a log cabin with a single long table against the wall. Terrible.

Amanda Hayes cannot color a comic page. She lays a single flat, and poorly chosen, color onto everything and then applies minimal shading. Sometimes, if she is feeling especially sassy, she will apply a gradient somewhere on the page. I would provide the simple piece of advice: “if you don't know how to color, don't.” But she also doesn't know how to draw and that didn't stop her, so I doubt she would listen to me.

If you have read any of my prior reviews you know how bad lettering drives me into a black rage. The Invisible Skein has some truly awful lettering. Let's take a look. 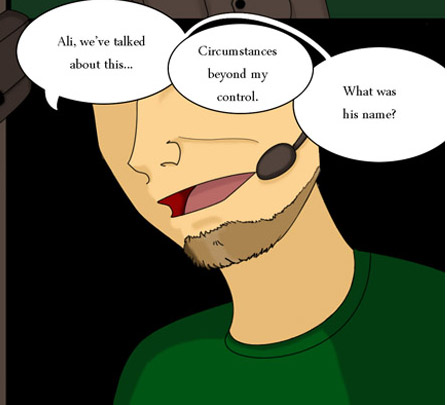 Gross, look how much air there is in those balloons, and the arrangement of the lettering, and the choice of font. All terrible. I mean c'mon if you are going to letter a comic, spend the 50 dollars and get a real font damnit. Finally the letters are covering half the character's fucking face. PRO TIP: thumb nail your pages before hand and plan space for the lettering so shit like this doesn't happen. 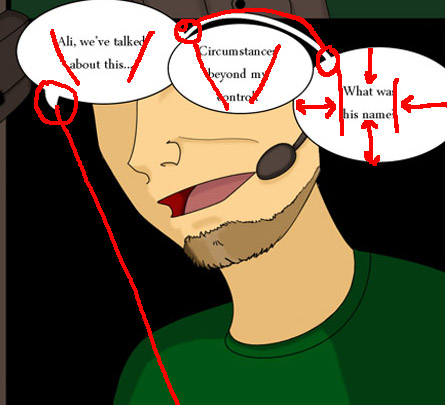 Notice how the tail, which should point to the speaker's mouth, points to his shoulder. Notice the arrangement of her letters, none of the arrangements are correct, and they aren't even uniform with each other. Notice the tail connecting balloons 1 and 3, weak enough to almost not be there. Notice how the letters aren't even centered within the balloons. But this is just the beginning.

On pages 4 and 5 she starts using a new font, and trying new letter groupings. Don't ask me why she thought it would be a good idea to switch fonts mid story, I don't fucking know. I mean the first font was horrible, but the second isn't much better. And why wouldn't she just re-letter the first three pages. Because she is lazy. 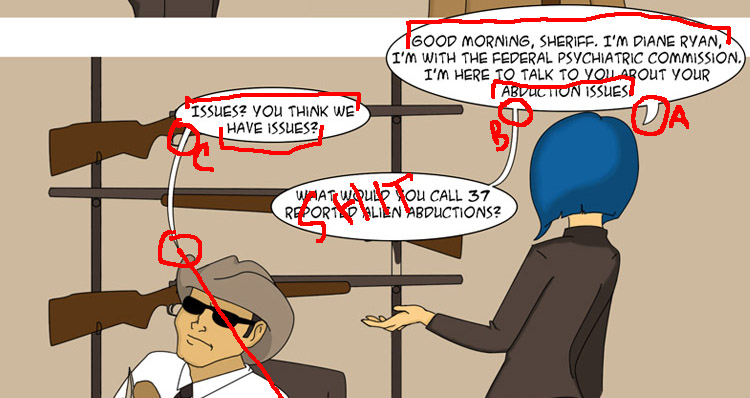 Even with her new, flashy, font there are serious problems here: Tails B and C should be the same width as Tail A. In balloon 1 why does she put 6 words in the first line and 2 in the last? And why is that dude talking from his goddamn shoulder? Do all the men in this comic speak out of mysterious shoulder mouths? WILL DIGGER SOLVE THIS MYSTERY? Surprisingly (note: this isn't actual a surprise at all) the letters actually get worse as she practices more.

We finally end up with these letters at the end of the tale:

She is saving and exporting her files at a smaller size now, which causes the the lettering to get pixellated and weird. Not a great choice. Her tails finally match in size, too bad she chose the uglier tail to be the winner. And the character is now speaking from her forehead, not her shoulder.

Mary. Fucking. Sue. Digger is an author avatar pure and simple. He is also a terrible character. There is no drama for Digger in this issue. He sits in his room and gets everything he wants. He knows everything from the onset and stands to lose nothing, in fact, it isn't even clear what he stands to gain.

Moving on, the plot. So this is one of those “every conspiracy theory you've heard is true, the government is lying to us, trust no one”- type stories. Like the The X-Files and The Invisibles had a kid and then that kid got its sister pregnant. This is that inbred child. There are no new ideas here, or even any interesting takes on old ones. The agoraphobic detective has been done before too, and it wasn't a great idea then. Not much really happens in the issue, and nothing is resolved. Not a single character has a motivation I can identify, and there is no theme present. K. Patrick Glover didn't get a single thing right. Apparently he is working on issue number two. I'm so goddamn scared.

I fucking hate these people and their bad ideas.