The only reason I even know this comic exists is because it was mentioned on the site forums, and I can easily see why it was suggested. Because this is an adaptation of The Silmarillion, and I happened to be reading it at the time, I thought, "Well, shit. Looks like I have to take a look at this."

Many aspiring artists have tried adapting the literary works of J.R.R. Tolkien into other mediums for decades, with varying degrees of success and faithfulness. For the longest time, the only adaptations available were the low-budget Rankin-Bass films and the miscellaneous piece of fanart. Or that one time Spock sang the Ballad of Bilbo Baggins. It wasn't until Peter Jackson’s film trilogy of The Lord of the Rings that Tolkien’s work finally became mainstream.

Stormwreath is no Peter Jackson, to put it mildly.

The History of Middle Earth (Chibi Version) is what you get when you combine the work of one of the most celebrated authors of the 20th century with an obsession with all things kawaii. Both ordinary comic fans and Tolkien fans will not be amused by this by-the-numbers sprite comic that fails to be funny, original, or entertaining.

Now, don’t get me wrong, I’m not expecting webcomic authors to make adaptations on par with big-budget films. My only expectations are 1. That the writer actually gives a damn about the source material, and 2. Present it in a way that doesn't make me immediately want to claw out my eyes. And this comic fails on both counts.

Page one. I took one look at this comic and right away I saw a major problem; its poor formatting. No panels. No word balloons. No sense of where scenes end or begin. Besides being incredibly lazy, it's also very confusing. That right there sets the tone for the rest of the comic.

Actually, scratch that. This might be an instance where the comic is terrible before it even begins. What would compel Stormwreath to undertake this idea?

I've been playing around with an online chibi generator again, and conceived the rather mad idea of retelling the story of J R R Tolkien's Silmarillion using cute Japanese anime-style cartoon characters. Because I can.

Just because you can doesn't mean you should. I can't fathom how an anime adaptation - specifically a chibi adaptation - of a Tolkien work could possibly be considered a good idea. It's like trying to combine lobster tail with marshmallow sauce. One of the first things you learned as a kid was that just because you like two different things doesn't mean they go well together.

Because this is an adaptation rather than an original story, I'm going to briefly discuss the book this comic is based on, The Silmarillion. It is the prequel to both The Hobbit and The Lord of the Rings, as well as the underlying mythology of Middle earth, covering its history from its creation to the beginning of the Third Age. Only a handful of characters would be familiar to casual Tolkien fans, such as Gandalf, Galadriel, and Elrond; the rest are important characters in establishing the world that later stories take place in. As such, Tolkien considered The Silmarillion as his most important work, as it established and built the world he would use for characters like Frodo and Gandalf and Aragorn to later take part in.

Here's a quick synopsis: God (aka Eru Iluvatar) first creates the ainur, and together they sing the world into existence. One ainur however, Melkor, rebels against him and wants to control Middle-Earth for himself. The ainur still loyal to God, the Valar, go down to Middle Earth to shape and defend it. Eventually God's firstborn children, the Elves, awaken some time before the creation of the Sun and Moon. The Valar decide that Melkor must be imprisoned in order to protect the elves, and invite the elves to live among them in Valinor (aka the Undying Lands). Most of the elves agree, but after Melkor's prison sentence is up, he starts stirring up dissent among the elves until he pisses off Feanor, leader of the Noldor elves, who decides to give a big middle finger to the Valar and chase after Melkor (now Morgoth) for killing his father and stealing his gems, the Silmarils. That's only about a third of the book, but you get the idea from there. The rest of the story is about the wars that arose from trying to defeat Morgoth and getting the silmarils back.

As of the writing of this review, the comic only covers the prologue and first three chapters in the Quenta Silmarillion in its first 90 pages, with twenty-three more chapters to go. 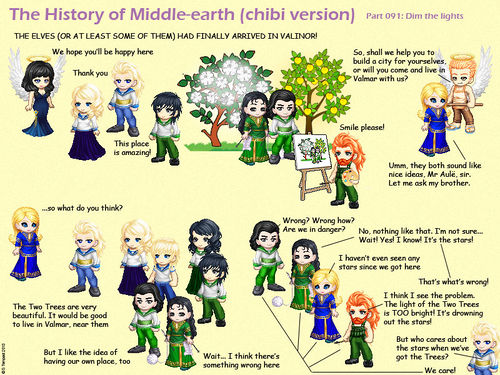 Just try and make sense of this mess.

Sprite comics suffer already from a lack of originality or artistic merit. In this case, however, we have a unique problem; using sprites from one franchise (Gaia Online) to represent characters from a completely different franchise (Tolkien). For those unfamiliar with the former, Gaia Online is an anime-themed social networking site from 2003, so you know its art is going to be top-notch quality.

All of the sprites are created using Gaia Online’s avatar editor. What this means is while each character can be customized to a degree to make them easier to differentiate, the creator is limited by whatever customization options are available. That’s why generic elves wear sailor suits, why their poses and expressions never change, or why all of them have the same exact faces. You literally would not be able to tell any of them apart without their different hairstyles and clothes. Furthermore, in order to make each character distinguishable, Stormwreath uses the most stereotypical images he can find. Irmo, the Lord of dreams, didn't exactly wear pajamas all the time.

As mentioned before, the formatting is terrible. There is simply no excuse for it, as it doesn't take any artistic talent to add simple panel barriers to make the comic easier to read. The backgrounds are completely blank and featureless, which simply compounds the problem. The one good thing I can say about them is that at least the author pays attention to when it’s light or dark, since it is an important plot point.

This is where Tolkien fans would have the most gripes; if you were a non-Tolkien fan reading this comic for the first time, then yes, you would get a general idea of what happens in The Silmarillion, but it’s hardly faithful to the source material. Where the comic fails the most is in the characterization of many of the major characters in the story. In a desperate need to “chibify” the source material, the characters have been boiled down into their most superficial features (or given outright completely different characters) in order to be more “cute” and “funny”. As a result, it tends to skip over important events and character motivations, or outright make things up.

Here's an example; the first chapter of the book covers the creation of Arda, called "The Music of the Ainur." It's basically Genesis with a bit of artistic license, since here, God doesn't speak the world into existence, he sings it with the aid of the Ainur. Melkor's rebellion takes the form of his disharmony as he vainly attempts to use his louder, "better" music to create the world. The comic... tries to do this in the most ham-fisted way possible: The Battle of the Bands. Instead of discussing how God intended to use Melkor's disharmony and make his own theme even richer, we get Melkor singing My Way (but not the Frank Sinatra version. Obviously). In the comic prior, God didn't have the ainur sing alone and then sing together "because that didn't work out so well," it was because they each only knew a small part of the whole song, and they were supposed to collaborate together to create a richer theme for the creation of the world. That was also why Melkor ended up rebelling; he refused to share and collaborate with anyone.

The characters are shallow versions of their original selves. This is Nienna, the Queen of pity, compassion, mercy, and patience and most importantly, Gandalf's teacher before he came to Middle Earth. How is she described in this comic? "It's all so sad *sob* *sob*". All that's missing is Evanescence- oh wait, here it is. Or how about Namo (aka Mandos), the Lord of the Dead, stern yet just judge of the deceased? "I WISH TO GATHER SOULS INTO MY DARK REALM." Mandos may be mostly pitiless, but he's not the grim reaper, nor does he own a dark realm or desire souls. He is merely a judge and seer. Or how about a character you'd likely be more familiar with; Sauron, the Dark Lord who forged the Ring, who tricked the elves into making the other rings to enslave the kings of Middle Earth, and twisted & manipulated people to his will? Here he's Melkor's buttbuddy fanboy. This is what I'm talking about; taking the most superficial parts of the original story and trying to "chibify" it.

I did notice however a note that he wrote on page 4 of his comic;

… as an aside, [it] makes me wonder if Tolkien would see fanfic writers (and directors of movie adaptations) as playing the role of Melkor, selfishly introducing their own themes and characters into the Great Work planned and devised by the Author? Though maybe it's okay by him as long as you only embellish, and not corrupt the underlying spirit of the work.

The problem here is that StephenT wants to have his cake and eat it too. He says he wants to not corrupt the underlying spirit of the work. However, as noted at the beginning of the review, he also wanted to make a more "chibi" version of Tolkien's work "Because I can." Look, you can have one or the other. You can be faithful to the original story, or you can have your weaboo fantasy fanfic. The two are simply not compatible. And it most definitely doesn't help when by your own admission you're outright making up shit.

Kawaii and Tolkien are not two great tastes that taste great together. If that was the only problem with the comic, I probably wouldn't have written this review. But the incredibly lazy art, the lazy formatting, and worst of all (in my opinion) the complete disregard for character makes this an insult to Tolkien fanworks and webcomics in general. Stormwreath, if you really want to make an adaptation of The Silmarillion, I suggest you go back, re-read the book, and get the characters right this time. Nobody wants your "cute" reinterpretation of them. If you're so dead-set on reinventing the story, then reinvent the story and drop the Tolkien labels. Commit to one side or the other. And for god's sake, draw some fucking panels!