The Guide to a Healthy Relationship

I found this webtoon while casually watching some reviews on YouTube. This one caught my interest, the review of it was pretty good, the YouTuber made the story sound promising, and example pages looked nice. That day I lost three hours of my life reading this trash in hopes of finding anything interesting.

The story is about an annoying alcoholic seeing his old friend or ex-boyfriend or something after it is implied that he died. Then hijinks ensue.

The prologue is an angstfest, narrating how much of a poor babu Julian is, and how he killed himself or some shit. In chapter 1, Apollo goes to a party, the entirety of which is dedicated to him walking around naked, and we get a bunch of obviously sexual shots of his dick, clearly catering to the author's gay fetish. His boss goes to his place to check on him, and it is revealed he is a hoarder. This never comes up again. Apollo sees his friend at a school but Apollo was drunk so did he realllly?! -obvious twist is so obvious-

Chapter 2 is the most pointless, as it is basically there to confirm what we already know so the author can insert a cringy buzzword (see image below), and so Apollo can hit on this constipated-looking guy who turns out to be his friend's boyfriend later on. There are a couple pages explaining Apollo's purple special snowflake eyes with some snowflake "disability".

Chapter 3 is dedicated to revealing the boyfriend shit I already mentioned, Julian being an angsty bitch, and boring, long, drawn out talking scenes. It is such a weird combination of stupid, confusing, and boring. This thing with Julian seeing shit comes out of nowhere, and never comes up again in the chapter. Apollo is an asshole to the guy for no reason, everything is all dark, then suddenly everyone is happily talking in a restaurant.

Chapter 4 is another complete angst party with everyone beating up on the webtoon's punching bag - Julian. A side character asks Julian's gender in the most unnatural way possible, causing the poor babu to be triggered. "Oh no, how dare he ask what GENDER I am!" Everyone goes to this cabin in the woods. Julian and Apollo walk around the woods in their underwear for no reason whatsoever. Julian takes some drugs or something, and passes out? He is then woken up by the fatty side character punching him. Somehow, Julian destroyed the kitchen, even though he was passed out - this is never explained, and makes no fucking sense. In the middle of the scene, it transitions into this trippy bullshit with blood, and body horror, and Julian's hair is suddenly short. The rest of the chapter is Julian being angsty, and SO ILL while everyone talks about how weird he is. Also, we have random nudity and sexualization of this sick person.

Chapter 5 is still in the works. It jumps the shark right away with Apollo getting drunk and sleeping with Julian's boyfriend. The author makes Apollo the guilty party and not the boyfriend. Julian is there, escorting Apollo to the bus stop because of his special eyes. The author cannot go five pages without adding some unnecessary angst in there. "Oh no, my parents kicked me out for being gay!"

This webtoon is so convoluted there is no saving it at this point. Each chapter is titled after some mental illness such as 'Monophobia', 'Anxiety', 'Psychosis'. You think they would have some thematic meaning with each chapter being about one of those things. Nope, they're just titled like that to show how EDGY this webtoon is! You can taste the cringe. Julian's mental shit has no rhyme or reason - he will act sick when the plot calls for it, and if it has anything to do with the chapter's title, it is also crazy inaccurate.

Nothing like the smell of cringy SJW buzzwords in the morning.

The characters are the worst. Not a single one is likable, or relatable in any way: 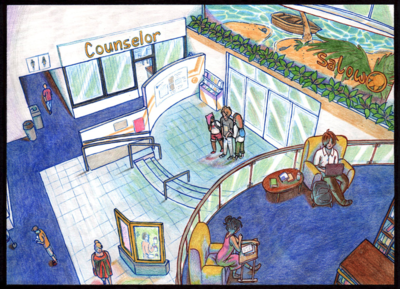 Wasted skills. What a tragedy.

The art is actually competent. The author makes some mistakes here and there, but has some understanding of anatomy, and perspective. The most impressive part is how the webtoon is drawn traditionally with color pencils. Unlike the majority, this one also has a good number of backgrounds and establishing shots.

This is sadly all overshadowed by horrendous colors, excessive detail that causes eyestrain, and a hideous artstyle. The characters are drawn in this semi-realistic style that shows too much, making them an eyesore. 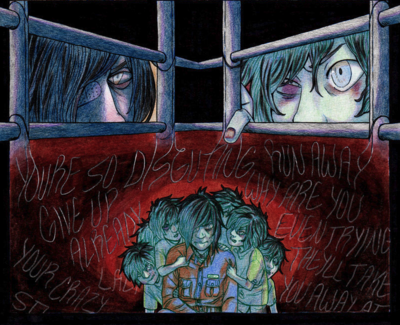 Check out this edgelord bullshit.

The author is so close to knowing what they are doing, yet so far.

The dialogue, like the story, is extremely bland. There are pages filled with text, some of the character's dialogue is spelled phonetically so it's impossible to understand a word they are saying, especially Apollo. The worst part is it is all written by hand so you cannot read this webtoon no matter how hard you try.

The writing for the story is awful. The author could not stick with one scene for more than a couple pages, the "plot" jumps all over the place with no loose ends being tied up. She can't stay in one location for more than a few pages. Whatever little story this webtoon has is put to the side for softcore porn (see page 15 of chapter 1 linked in Downfall), random nudity, character torture, and these stupid edgy "psychological" moments. There is a whole scene dedicated to the protagonists running around the woods in their underwear for no good reason other than that is the author's thing I guess.

Your typical Tumblr-grade artist with the fake gender, claims to be asexual. She cannot take critique for shit, but sure pretends she does by making forum threads asking for critique and spamming already existing threads. Every bit of feedback you take the time to give will be met with "I have a specific story I'm trying to tell so I can't change it", "I really like open impressionism and complimentary colors so I don't want to change it", "My characters are supposed to be unlikable"... Nothing but whining and excuses. This person is clearly just looking for asspats. 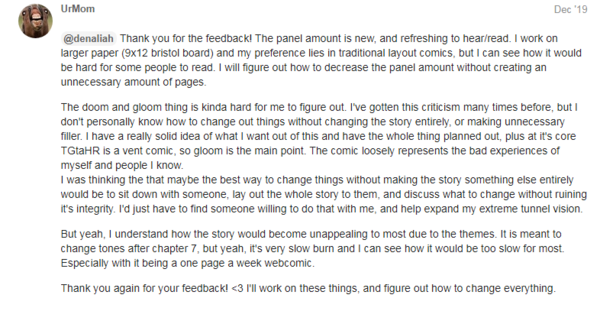 If you do not want to change your webtoon, stop asking for feedback, moron.

A waste of time and potential. The idea of a webtoon focusing on mental health sounded bold, yet difficult given how easily it can all go wrong. This one failed big time - the author's fetish for torturing queers overtook the story, and you can tell she did not do any research despite constantly bragging about how much research she did. Let's hope this fetishistic bullshit gets wiped out of existence soon, and that the author is made to only do illustrations. After fixing that ugly style, of course.