This comic came to the attention of BWW forumite and wiki contributor ZenForce, via YouTube drama: The writer behind this comic had abused the YouTube copyright strike system to remove negative reviews of her comic. This resulted in a lot of back and forth from the youtuber and the cartoonist, which the youtuber graciously posted for all to see. Oh the cringe. Just watching this video was enough to convince me to review this comic. No good cartoonist would ever do this, and if we're dealing with a thin-skinned moron who can't handle people saying mean things about her comic... oh... you know where this usually ends.

Imagine a furry college where everyone is bisexual (just so it's easy to mix and match up couples), and then throw in a teacher named Luka who has no concept of personal space, a very real creep, who hits on his students and does not give a fuck. Hell, the second chapter is called The Hunt and it is not subtle about the teacher making moves on his students IN CLASS, in view of everyone else. Apparently he 'needs' his prey to say no - as fucked up as that sounds. And of course the other students in his art class just laugh it off. With chapter titles like point of no return you know that shit is going to get steamy, right?

We're basically dealing with a comic that glorifies abusive relationships where one person forces himself on a younger and vulnerable man. In the age of #metoo, this comic stands out like a sore thumb. I mean, it's about a horny teacher abusing his position of power to, among other things, have sex with his students... whether they really want to or not. It's amazing that Airis is able to draw comics this detailed, considering that the writing sounds feels like a furry rip-off of Fifty Shades Of Grey, just with a creepy college art class teacher instead of a billionaire. Who cares about consent or inappropriate teacher/student relationships when senpai has noticed you. Also, quite a few comic pages feature exposition dumps vis a vis character sheets instead of organically introducing such information via the comic itself, because fuck good writing when you can write furry gay erotica.

Then there's also the fact that with a writer who doesn't speak English very well, the comic features no small amount of grammar issues - though most of it is minor enough to overlook.

The overall level of detail in the comic's artwork is very nice - but there's something about the faces... it's the eyes. The eye-lines (where it appears that the characters are looking) simply don't always add up. It's especially an issue early in the comic, like in the last panel here where it looks like they're looking under or over the painting, when I think they're supposed to be looking in the same direction. The issue is also that the artist is clearly best at drawing smiling faces, while most faces that are meant to express negative emotion look kinda weird, as in the second panel here. Also the backgrounds are quite often really fucking basic, but it's clear that the artistic energy for the comic is being put into the characters, not the backgrounds. 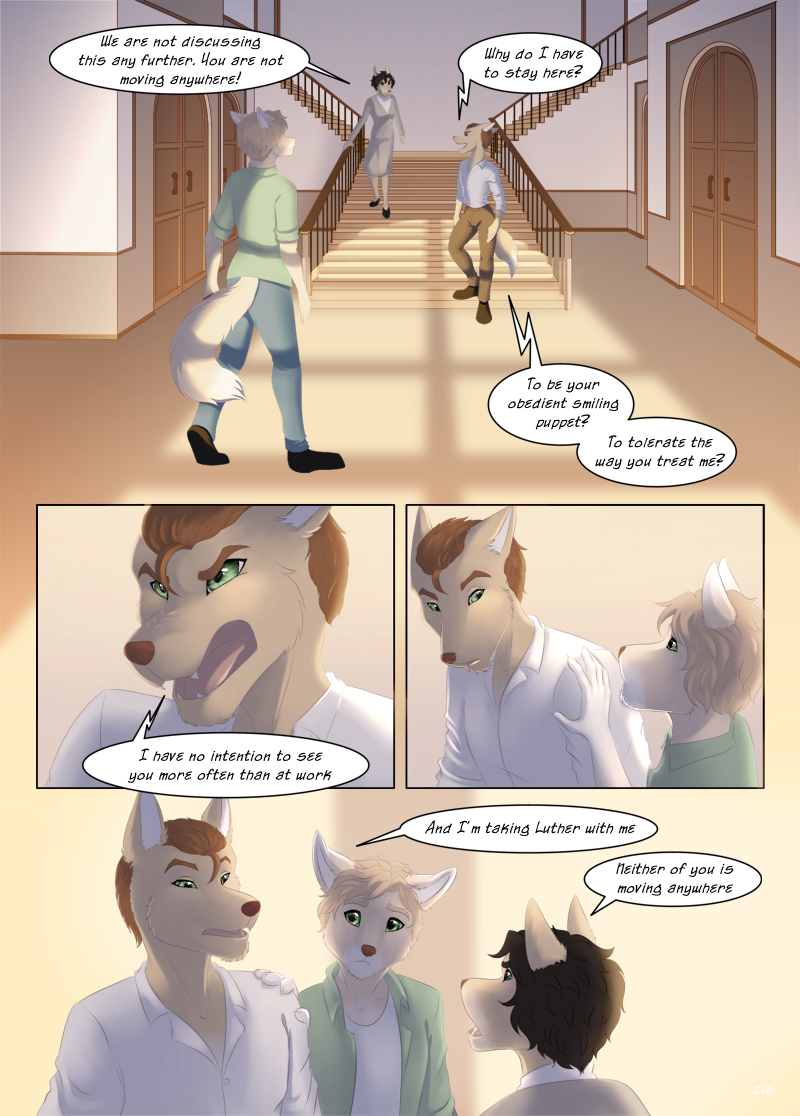 Behold glorious Eastern European google translate grammar - and people who do no cast shadows on the ground, because fuck that

It's also a bit of an issue that with the artist's style, it can sometimes be hard to see what gender a character is. Sometimes you can be in doubt whether you're looking at a flat chested female student, or an effeminate male student.

Airis Kiahin & YumiCH Airis seems to be the artist, while Yumi is the writer and supporting artist. It was YumiCH who appeared to be doing all the copystriking that put this comic on my radar. Now Airis doesn't actually put any real personal info on her FA profile page, but Yumi does: Yumi is Ukrainian, and says she doesn't speak English very well. Whelp. A Ukrainian threatening an American youtuber with an internet lolsuit? hahahhaa!

Now, the real info on YumiCH and her bitchy attempt at removing critique of her comic via abuse of the YouTube copyright system is fully revealed via the three videos that the youtuber she attacked put up. In the first one we're shown screencaps of email correspondence, how she tries to manipulate and bully the youtuber into deleting his videos and never speaking ill of her comic again. We're talking full on internet lolsuit threats here. Bitch has no clue how fair use works. In the second video we get a delightful summary of the comic which is maximum top kek, plus it explains how YumiCH has started to wipe her entire online presence, likely to claim more internet victim points. In the glorious part three we get that YumiCH apparently asked her fans to mass report the youtuber who had spoken negatively about her comic. Adorable.

I should also add that I, the writer of this review, have actually worked as a teacher. I've taught an art class. You best believe that the kind of bullshit that Luka does in this comic would get you fired and blacklisted from ever teaching again so fast that it would make your head spin. The amount of fetishization of pushy and borderline non-consensual sex and 'seduction' in this comic... it's exactly what you'd expect from someone who read Fifty Shades and then thought "I can make a furry version of this" while touching themselves furiously.