The Cute And Cuddly Cast

If there's one thing I'm sick of seeing, it's webcomic artists who think that they can express a deep, emotional story about the meaning of life and tragedy of death through the medium of squishy cartoon animals. I'm willing to bet that you've seen them too. Hell, maybe you're even guilty of it yourself. If you are, stick around. I'm here to point out things that are wrong with your brain, since clearly you haven't noticed for yourself yet. 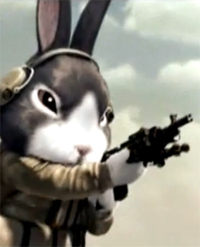 When we see cartoons, they immediately cause our mind to assume that what we are about to witness will be humorous. Not necessarily child-friendly humor, as anyone can agree that adult cartoons have been around quite long enough for us all to accept that they exist, but we expect humor nonetheless, for that is the nature of cartoons themselves. The way a character is designed tells things not only about the character's nature, but also about the work they are featuring in.

When you see a big-eyed, wiggly-armed, extremely-stylized cartoon bunny grinning up at you from the screen, it's fair to expect that what you've chanced upon isn't exactly going to be heavy, morose preaching about why life is terrible and not worth living. So why do so many webcomic artists fall into the trap of thinking that they can tell horror stories with baby animals? Why are green bunnies and white mice crying about cancer and trying to persuade us that abortions are evil?

Don't get me wrong--using cartoony characters on an adult theme can be alright for the odd bit of shock art. We've all seen that pink sculpture of Mickey Mouse with the big penis. But even shock art like that has a weird sense of humor to it; as if the artist is there beside you, invisible, elbowing you in the side and encouraging you to giggle along with them. They're not trying to convey a serious story with serious characters and a serious message that you should totally be paying attention to because it is all sorts of dramatic and serious.

It's also admittedly a little unfair to single out anthropomorphic characters, but they are by far the worst offenders. For the record, I'm aware that there are a fair share of comics on the internet with bug-eyed human cartoon characters trying to act like badasses (cough CAD cough), but since the furry crowd have already crowned themselves the kings of this retarded realm, I'm mostly going to roll with why your fluffy bunny character isn't going to convince everyone you are a master writer. Let's go!

Offenders and their offenses

The infuriatingly popular webcomic Jack is a good way to introduce you to this special-school of furry frivolity. Jack is apparently a story about heaven, hell, demons, misery, violence, and all of those other things goths like to write songs about. It's too serious about itself to be described as dark comedy, and so it makes a perfect example of something being done very wrong. Jack tries to both have its cake and eat it; to have stylized, childish cartoon animal characters with Bugs Bunny-like faces, but to also be a serious and artsy story about grown up things.

Characters are drawn with large eyes to give them a natural look of innocence. The artist of Jack apparently doesn't know this, as all of his characters - no matter how evil or good - all have eyes larger than their entire brains; great bulging eyeballs that stick out of their skulls like the eyes of a hysterical chihuahua. I suppose it's a positive point that such large eyes are good for portraying a lot of exaggerated emotion; but again, in a story about metaphors and demons and things, it really doesn't fit for your characters to be making such wacky, exaggerated expressions and movements - there should be more subtlety.

Although the "cute and cuddly with a sharp edge" bit has been beaten to death, resurrected and shot again and again, it's possible to have something with cute, bulging eyes that won't make you gouge out your own eyes. These misfits should be treated just like any other adequately fleshed-out characters. Here are a few things to consider:

(Since this article was written, I discovered the webcomic Forest Hill, which uses furry characters in a dramatic story, but unlike Jack, this scenario is done infinitely better. The animal characters are in a specifically animal scenario with its associated culture and rules, and the animals are relatively realistic rather than exaggeratedly cutesy like in Jack. Forest Hill deals with religion, but everything is specifically terrestrial and there are no demons or angels to be seen, and harsh subjects such as child abuse and molestation are dealt with, but not in a graphic or exploitative way. 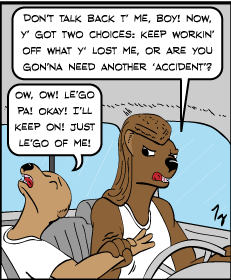 But why use anthropomorphic animals instead of humans in such a story? Because there is no reason that a world of anthropomorphic animals would necessarily be any nicer than one with humans. Indeed, the popular Watership Down story, about non-anthropomorphic but talking rabbits, also deals with violence, death, and suffering. So it is possible to use furries to depict serious and even harsh topics if done correctly. Long Tom.)