I first encountered Darryl Hughes, his online persona – The Dee Man- and his webcomic The Continentals on Whitechapel, a forum satellite to Warren Ellis in general and his webcomic Freak Angels in particular. There, Darryl, or The Dee Man was putting forth and attempting to defend the insane argument that independent webcomic creators should stop trying to get their comics into stores and be happy with online and print on demand publishing. He got torn apart there, and after some pimping of his webcomic his posting trickled away. A little while later I noticed him in the Something Awful Forums, he lasted only a few hours before his account got banned, for pimping his website, creating threads with no content and signing his posts (The Dee Man always signs his posts, which is one of the most annoying things you can do on a forum). After that it seemed like I couldn't go to a webcomics related site without having to read the same signed, form letter, pimp post asking me if I like a little murder, mystery, and adventure with my steampunky webcomics. (The answer Darryl, is -no- I do fucking not. Not if you are writing it anyway.)

Darryl even went so far as to invade a Transgendered Comics forum and plug his web comic there because he has a female character dressing as a man. Someone eventually asked him if he was actually planning on including any actual transgendered characters or issues beyond *gasp* a woman who wears pants, and he point blank told them he was not, that he was only there to promote his crap that he did not even consider to be a transgendered comic when he wrote it. Talk about crass and insensitive behavior.

Now there is nothing wrong with promoting your webcomic, in fact it is an absolute necessity, but this is not promotion, it is being a dick. Showing up at every forum you can think of, behaving like an asshole, posting your copy paste promotional ejaculate and then disappearing is the wrong way to go about things. Not a single internet community appreciates this kind of person, who’s first and last post is simply to direct you to their work elsewhere. If there is one thing to learned from this review, and from Darryl’s behavior it is how not to promote your webcomic. (if there are two things the second is: how not to look like a prick on the internet.) As of this writing (and this is obviously subject to change) this is what a google search for “The Continentals Webcomic” brings up. Notice that the actual comic is not even on the first page, just a ton of forums where Darryl is pimping the thing. The forums he posts on once return more popular results than his comic.

I tried to read The Continentals the first time I came across The Dee Man, but I couldn’t get into it, it was so bad. And then I tried again after he got banned from Something Awful, but gave up again, because I found it was still very bad. I tried again and again but each time was forced to quit because the damn thing was so boring and so poorly executed. But I have finally done it: I have slogged through the entire mediocre thing, inspired by my anger at The Dee Man’s online flood of terrible promotion -–knowing that if I could only keep reading, I could write a review and be done with The Dee Man and The Continentals. This is that review, I read the worst comics on the internet so you don’t have to.

The downfall of this comic begins where most terrible comics begin their plummet into that vast river shit: with the web design. If you have a webcomic and are looking for hosting and you are thinking about using webcomics nation: don’t. Navigating through webcomics nation is a fucking chore. To read The Continentals first you have to locate the tiny link that takes you to the first actual comic page. Because for some reason Darryl thought it would be a great idea to have the link provided to him by webcomics nation that is meant to take the reader to the first comic link to some bad promotional art instead. You can’t just read this comic, no, you have to really work to read it.

Once you have managed to locate this link you are still faced with the daunting tasks of scrolling down to find the actual comic, reading it and then scrolling all the way down past the creative team’s comments, past the readers comments, past the comment box to find the navigation links. Now you can click the comic itself to advance to the next page, but you still have to scroll down to start reading the damn thing. Way more work than it is worth. This comic is kind of like how the Large Hadron Collider was suspected of sending particles back through time to prevent its operation, this web design sends crap at you through its interface to prevent you from reading the comic. Heed its warnings.

Crisscrossing the literary genres of murder/mystery, action/adventure, historical drama, horror, science fiction, and steampunk, "The Continentals" …is a modern re-imagining of the classic 19th century Sherlock Holmes "who done it" murder mystery created for the 21st century webcomic fan.

1889. Barely a year after the mysterious Jack the Ripper's murderous rampage and equally mysterious disappearance the city of Mansfordshire, England is shaken by a series of brutal "mangling" murders that plunge the city into an abyss of fear.

Investigating the case, Continental Operatives Jeffrey Tiffen Smythe and his partner the gender bending adventuress Lady Fiona Fiziwigg uncover the threads that bind the murderer, his victims, the highest echelons of society, its lowest dregs, and even the police officers investigating the case in a tangled web of mystery, adventure, intrigue, and murder that is like Sherlock Holmes, mixed with equal parts of the 60's tv show The Avengers, with a dash of James Bond for flavor.

There are so many problems with those sentences. Here is a quick breakdown of the story so far: A man escapes from a mental asylum and starts slashing people with knives, some boring things happen and then some boring characters are introduced to solve all the mysterious mystery that abounds in this mysterious realm of action/adventure -murder/mystery- steam punk/science fiction - horror. Then I get bored and try to kill myself with a claw hammer.

UPDATE: The author has brought this story to an appropriate conclusion.

On most of the forums that The Dee Man plagues, the response given by its residents is typically along the lines of “the art is pretty good, the writing is pretty bad.” I am a harsher critic of art than most of these forum goers; I would not call this art "pretty good." I would not call it good. The artist, Monique MacNaughton, has technical ability: she can draw. She can ink, spot her blacks, crosshatch the shit out of things, etc. But she is possessed of very little storytelling ability, and cannot letter to save her life. 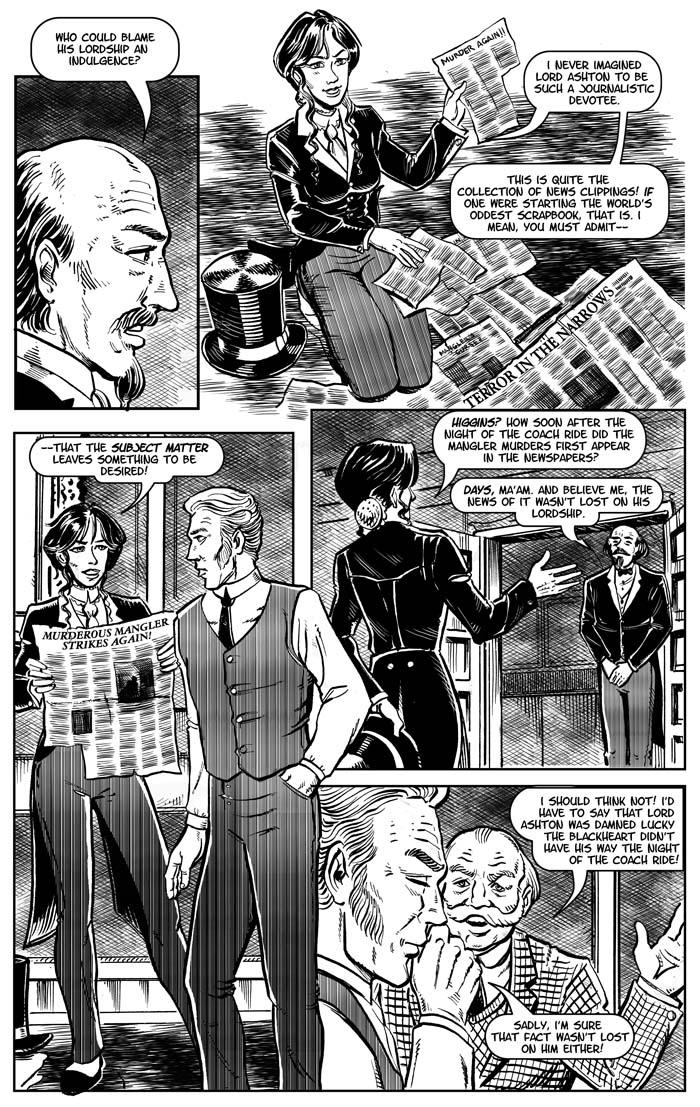 Pinstriping isn't her forte either.

Here are the basic problems with her art and storytelling: there is very little variety in point of view, we almost always see our characters from the same distance and vantage points and they almost without exception either straight on or in profile. Monique doesn’t seem to be able to draw a ¾ view of a person. Characters move as though made of tinder, careful to not move out of a set neutral pose for fear of breaking. Monique’s faces are nearly all the same with different haircuts and mustaches applied. She takes extreme short cuts with her story telling, having her characters point to extremely obvious clues in the panel, instead of rendering them in a way that makes them seem important unto themselves. Lots of people can draw, and draw well. But, as any editor will tell you, its better to be a good storyteller and a mediocre artist, than a technically skilled artist with no storytelling skill set. Monique is the latter.

Finally, her lettering is very bad. Disgusting mal-formed tails, bobbled squished balloons. No consistency in style or breathing room. Bad lettering kills books, and if this book wasn't already dead in the water it would have killed this one.

Darryl “The Dee Man” Hughes cannot write. Give it up buddy, pack it in, and call it a day. He demonstrates a great deal of the problems that new writers often struggle with. Namely, Darryl is overly reliant on voiceover style captions, always telling never showing. He is unable to write believable dialogue and he is boring. He is so goddamn boring.

Posting on Something Awful, before his ban, Darryl tried to defend his writing against another poster there by saying:

To be fair, as the writer, I just want to point out the the [sic] story just really got started and has been mostly art driven so far, so you really haven't gotten a full taste of the writing yet. I hope you'll give it a chance.

Darryl, this is the hallmark of a bad comic writer. The story is never ‘art driven.’ You are the writer so you drive the story, the artist draws what you write. Furthermore, why should we give it a chance? Why should we stick around if the first panel of the first page doesn’t grab us? That is your job. We have gotten a full taste of the writing and it is bad. You are a bad writer.

Monique MacNaughton was born in Ottawa on June 15, 1965, to an RCAF photographer and homemaker and grew up in Nepean, Ontario on the capital city's outskirts before moving with her family to Fredericton in 1978. After graduating with a B.A. from St. Thomas University, she went on to get a diploma in Communication Arts in the field of graphic design from NBCC Woodstock. She continues to live with her family in New Maryland, New Brunswick, doing freelance graphic work, contracting and portrait commissions in addition to her comics and graphic novels. Coydog Press is her personal imprint, graphically represented by a portrait of ?Jake?, a German Shepherd that lived in the MacNaughton household for many years. She has also worked on GAAK, an ongoing online comic which is a team project with writer Darryl Hughes of New York, the first volume of which has recently come out in print.
MacNaughton takes artistic cues from the greatest innovators in graphic storytelling - Will Eisner, Wally Wood, Hal Foster, Walt Kelly, Osamu Tezuka, Richard and Wendy Pini, Donna Barr and Scott MacLeod. In writing, her primary influences are Robert Heinlein, L. Neil Smith, Spider Robinson, J. Neil Schulman, Lois McMaster Bujold, Orson Scott Card, Harry Turtledove and C.J. Cherryh. Accordingly, science fiction is one of her primary areas of interest along with classic movies, folk music, technology, history, nature, animals and the advocacy for and preservation of individual rights and freedoms.

Darryl “The Dee Man” Hughes is an annoying man, who enjoys pestering online communities, signing his posts, and saying ‘LOL!’

Don’t bother reading this thing, if you see The Dee Man online ignore him. One of the few great things about the terrible web design these two employ is that they are running ads by Project Wonderful. Project Wonderful considers everyone to be a potential advertiser so the comic’s stats are available to the public. They are currently getting 200-300 hits a day, although they got nearly 1,000 a while back from a favorable link. Let’s give them a bit more traffic that they can track back here and hopefully afterwards they will stop.