In the literary world, their are all sorts of works, in all sizes. I once read a published short story with one sentence. On the other hand, there are quite long ones, from huge novels to series of huge novels. Yet, an author's talent cannot be measured by his word count. So why do people always think the contrary?! Like that friend of yours from college who once had a poem published in the newspaper, and is now planning a 100-volume epic to show the world his superb skill at the written word. Perhaps that person's name was Elanor Cooper, and perhaps she hooked up some decent-and-a-half artist called J.J. Näas to make a series of failed webcomics, the latest of them being The Broken Mirror.

The Broken Mirror is the renegade soap opera of the Webcomic World. It had a long, ambitiously epic future planned out from the start to reach the promised land of praise and publishing. Of course, shit never happened. The Broken Mirror may stand in glory for just one thing: being the biggest waste of time, words, and art ever invested into a webcomic. After more than two years of teasing and driving in circles, it can safely be said that nothing has happened and that we are still waiting for the real story to unravel.

Since trying to explain the story to any degree of detail would put you to sleep, I'm going to make it interesting. So, cue the music!

"The Epic Prince of Dom-Air"

Now this is the story, all about how
Galen-Sue's life was hacked upside-down.
And I'd like to take a moment, just sit right there Naas
and watch Cooper write a story that sucks like ass.


In Southwestern England, born and raised
On the forest was where I spent most of my days
Chillin' out walkin' verbalizin' all cool
And picking up druggies outside of the school


When my couple of folks, who were up to no good
Started whoopin' ass in my neighborhood
I failed some tests and my father got red
He said 'You're movin' to a flat to eat shit on a plate!'


I pulled up exposition chapters, 'bout 8 or 9
And I yelled to the cabbie 'Yo homes, I played you fine!'
I looked at my kingdom, I was nowhere close
To be continued, folks, when I finish my throne

As mentioned above, the comic must've thought very highly of itself. I mean, their first update was just text. Things never came along right in the comic, and it soon started to decay. Not because fans didn't stick to the comic. By any means, their fans must be the most patient people on Earth for sitting down as Elanor butted her head against walls to think of a way to bring her crappy plot together. Some even wait for her today in her shoutbox!

The reason the comic reached a point of no return was because of its pacing. After some chapters, one could see how slow the story moved. It's just a series of tragic (and impossible) memories of people we never get to know well enough. Perhaps it was background for a great story, but we never got to know. Even updating three pages a week, it got nowhere. Fuck, even Dominic Deegan and its four daily panels have more meat in them. Something is really wrong when fucking Mookie can get more plot into a four-panel strip than you can on a full page.

The Broken Mirror had arguably one of the best reviews at John Solomon's blog. It was done at the peak of the blog's fame, and it's effect was so big that a time came when almost all the comic's traffic came from Solomon's links. Updates to the comic became ever more inconsistent, and the last pages ever were posted at the beginning of June 2008. Did Solomon kill her? She gave up almost a year after the review, so at the very least, he was the cause for her spiral into the darkness.

Elanor Cooper, the autheur of this comic, is a narcissistic prick. The kind that wouldn't hear criticism if it came from her parents. She reads out like an angsty teenager that thinks everybody owes them and that her life is so cruel and bad that she just deserves to be famous for it, somehow. What else would come from a woman whose interests are "Cats, chocolate, wine, teh fluffy haired mens" (a serious feeling of disturbance for that last one)?

Most of Cooper's escapades can be seen on her own site forums, where she grows on admiration from her fans. They are ready to defend and please her by speaking in flowery language as they "insult" all her detractors and defend her pride. You know, anything they can do inside their little forum, where no one can harm them and their god will protect them from any harm (even JJ was coerced into attacking Solomon, though he's barely mentioned in the review). Cooper naturally responds to these warm gestures with precious bits of wisdom like:

Why can't you understand she's a prolific writer and a fantastic human being?!

I don't hate the art. J.J. Naas comes across good in his work, and he has potential for huge and splendid backgrounds like the one from the title page, and some other occasions. Of course, Cooper would try to claim credit for this, saying that she "inspired" and "directed" him to make the nice landscapes. Fortunately, JJ's dA account and photographs prove otherwise. He don't need no Cooper.

That being said, he still has to work on drawing characters, which are sadly lacking on a few occasions. Nothing but a few flaws here and there: some body parts out of place, some long necks, and some small traces of animu inspiration. At times, the characters or the backgrounds look sketchy, probably because of the difficulty in keeping up with Cooper's instructions on a thrice-weekly pace (she probably scribbles instructions at the last moment). Nothing a few eraser wipes can't fix. 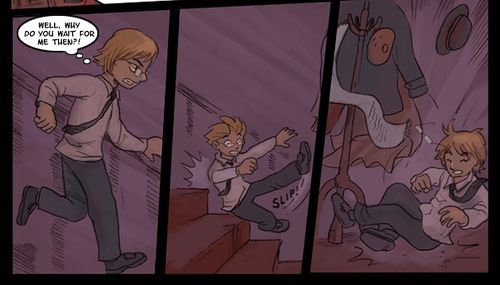 The story that is imprinted into this comic is a joke, because it's simply unreal. Not unreal in the sci-fi or fantasy sense, but unreal by any means of human measure. Situations, plots and twists just don't make sense in most circumstances. Characters can't speak without messing up or missing the point, which normally takes two to four walls of text to fix. The "bunch of tragic memories" format is both too fast-paced to catch any insight of the characters and too slow and unattractive to hold our attention for too long. Basically, nothing goes right, everybody dies or fails Math or leaves home or becomes depressed. That's an automatic spoiler for each chapter of the comic.

So this is a story about a kid named Galen. Not only is he a conceited asshole who doesn't care for anything other than himself (just like Cooper must be in real life) but we're supposed to feel sympathy for him. After all, he was beaten by his mean parents because he didn't care about school except for English class and spent all of his days wandering around in forests. The girl, Xara (because spelling Sara with an s wouldn't make it special enough), is also a self-important bitch to the point that she cried until her parents were forced to go on vacation to Italy. She even hid in a cave to see if anybody cared about her. Needless to say, she was bored after some hours and tried to kill herself by dancing off the edge of a cliff. Fortunately, her older sister saved her, so Xara could witness her slow death at the hands of Mad Cow Disease. Cue organ sounds and mellow music; this kid's stories are so sad... sniff...

Except, they're not. All this told me was that both kids were dicks and they got what was coming to them. Galen hasn't said a single thing but trash-talk and "Sarcasm 101" to the people around him, and they all have answered back the same. When he meets Xara, he can only say "You have the most tremendously melancholy green eyes I've ever seen." Grammar mistakes aside (melancholic), it's a shitty phrase. But it's enough to make Xara feel something for him. This is because nothing can really go wrong with Galen. He's the self-insertion of Cooper, and whatever tragedy he has gone through, he was either the martyr and/or the one who was right. He was just punched and toyed with for the heck of it!

All this unnecessary interlude pulls the real story away from us. Why did we need to see all those memories? What's up with these people? What's going to happen to them (other than the next tragic happening)? Most reviewers felt hesitant to comment on the story because they don't know how far into it we are. These 130+ pages feel like four. Most just assume that DominO, the virtual world Galen and Co. are at, is the main center of the story and its all going to work from that point on. I believe DominO is just another slide in the drama slideshow. Galen was just offered four weeks of testing. He will probably leave before that to undertake the romantic chase of his loved one, then the two of them will meet, get married and eventually divorce because they can't stand each other.

Cooper's overview of the story, if there even is one, must have been so large, it must be another hundred pages before something happens. This is what usually happens with people who plan out their endless epic novels and comics when they are teenagers (myself included). They end up realizing it's endless and they can't hold to their thoughts for more than a week, so they run away while flipping at others for "not understanding them". Well Cooper, you only have yourself to blame for this mess. This "epic story" of yours shouldn't have left your glorious sketchpad.

The Broken Mirror is as silly and irrelevant as scribbles done at the corners of old newspapers. I'm not talking about the art here, which is damn worthy, but about the writing. The writing is some sort of fantastic voyage to the inside of a crazy narcissist who believes she can't be wrong whatsoever and has incredible adventures with life experiences and teachings.

Of course, that's what she sees. What we see is a person smiling and humming a song we can't even recognize or understand. It's like we had to read her mind to find out what she means and how she sees things, because she certainly can't be bothered to learn how to express herself in writing. We have not yet seen the real Broken Mirror. This is just a reflection. Whenever Cooper rips another two or three years from Satan, pushes out another hundred or two pages and sinks us lower and lower into her stupid imagination, maybe we'll see another small part of it. Until then, stay here for a minute, whilst I go and get some ice creams.

I was just waiting to say that line. I wrote this entire fucking review to say it. I PLAYED YOU FINE!! HA HA HA!

In case you didn't figure it out, reading this webcomic can make you go fucking insane.