I haven't been on this wiki as much as I used to, mostly because of older age and newer things coming and overshadowing others. Honestly, I think it's a shame; as this wiki helped me to start taking my art from a hobby into a serious career.

But you know what they say; there's always that one thing that drives you back in. Well friends, I have found that said thing. And the worst part of it is that it shouldn't been here to begin with, giving the author's time spent on DeviantArt.

So what is it about evil that is so tempting in this webcomic? Gather the village. It's story time.

This is another one of those comics that starts off bad and doesn't get better.

Our story begins as we delve into a battle between Magical Girl, Super Hiroko-Chan, and Dark Queen Yamiya already in progress. As you might expect in this sort of situation; Yamiya is defeated and Hiroko-Chan takes home a 'W'. She heads off to dispose of her outfit, but first takes a shower. But what's this?! It turns out that Hiroko-Chan likes how smooth Yamiya's leather bodysuit is and despite wearing skimpy clothes being against her code of conduct; she decides to try it out for herself.

She likes it and goes even further, eventually wearing the entire costume and deciding "Eh, fuck it. Being good is stupid, let's go to the dark side!" From there on she spreads chaos, killing her boyfriend and corrupting a family to do her bidding. As this is happening, a weird animal creature watches from the distance; horrified at what has occurred.

He flies off to the distance to revive Yamiya in the same spot where she died in that epic battle earlier on. From there on, we are given an explanation as to why this came about and what had occurred to bring about this tragic fate. As it turns out, the two were once best friends until Yamiya fell in love with a popular football jock, simply named Tadoshi.

And that's it. We are given no closure as to how it ends. It just stops there.

Don't you just hate it when people do that?

I will start by giving credit where credit is due. The character design isn't that bad. It isn't fantastic by any stretch of the imagination, but for what it's worth it's not bad. At the very least, I can tell what all of these characters look like and none of them look the same. The outfits are also pretty decent looking too. Especially the villain's. But let's be real, anytime you have a female villain in anime; it's guaranteed that they find a way to make her look fuckable. It's the easiest trick in the anime handbook. There are also moments where the artwork is actually decent: Usually in terms of poses. Pages 28 and 61 are some examples of that.

Unfortunately, the praise ends there are there are a few problems with it overall. The anatomy is somewhat inconsistent and slightly changes its shape almost every time during the course of a page. 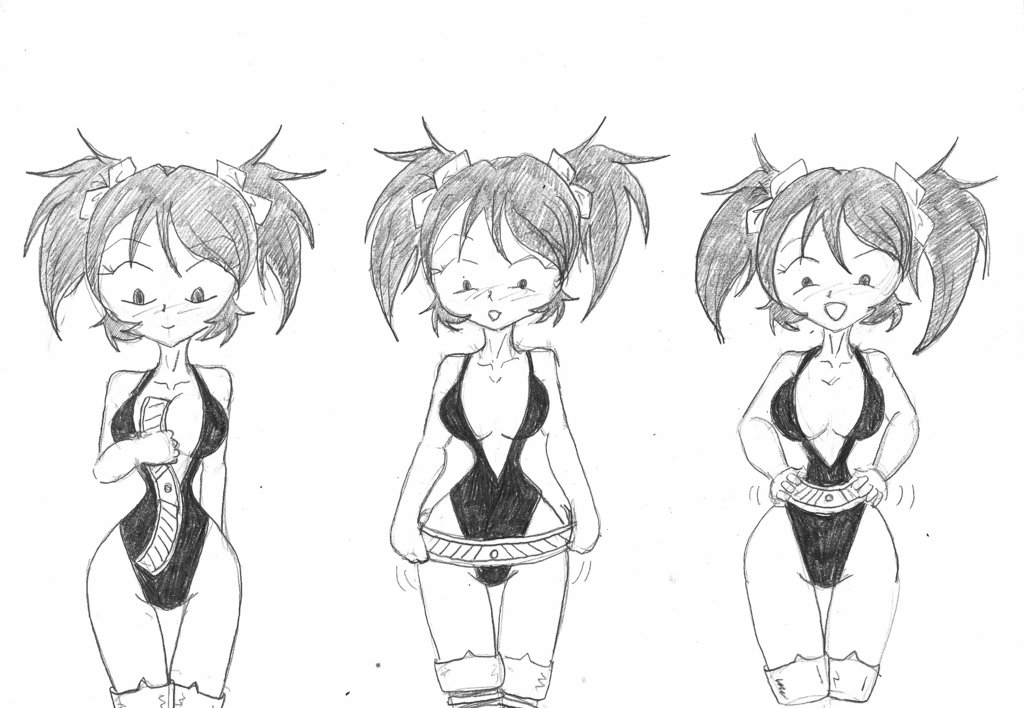 Some of the poses also seem extremely stiff in places, using no amount of effort to make the poses seem as important as they should be.

Take page 22 for example: This is supposed to be Hiroko-Chan's introduction to evil, but the poses shown don't make it seem as big or grandiose as it should be. You would think she'd go nuts over this idea, but instead it's another day at the office.

Also, some of the choices seem rather bizarre. Take a look at page 25: Why are we staring at the bottom half of her right side? You would think maybe we'd see her finding her old scepter turning into a choker; but no. None of that. It's basically a normal Tuesday in the Hundred Acre Woods.

This comic also has a serious problem with using talking heads with no perspective. It isn't too much of a bother, but it's still slightly present in a few scenes (mostly in the latter portion of the comic) Talking heads are fine once in a while, but doing it more than once makes the art very boring.

With that out of the way, here are the two biggest problems this webcomic has. You will notice that this none of the pages I show you have backgrounds. That is because the author was so lazy, they didn't even bother putting any in. Not only is that lazy, that devoids the comic of any semblance of personality. Not exactly something you're supposed to do in a webcomic or any drawing for that matter.

But there's another thing this webcomic does that I've never seen before...This webcomic is so utterly bankrupt of effort, it doesn't use panels.

I kid you not: This webcomic forgoes the use of panels altogether. Now you may be asking yourself, "Gee Jacob, I don't see what the problem is!". Well, allow me to explain.

You need panels so you can control what size of space you need for your pictures, that way the scenes you need have the appropriate amount of space needed to be effective and work within the parameters of the webcomic. Even Sonichu realized this, and when I can compare that favorably to a webcomic from someone that's been on the no. 1 art sharing site in the world for fourteen years (and in fact got a review on this wiki with an Atomic Bomb rating), you know you've shit the bed.

If this had been done a younger or less experienced creator, maybe I would understand and even be a lot less harsh on them; but this is someone who's been around since the earliest days of the DeviantArt website. This is someone we're supposed to respect as a pioneer. And so I'm harder on them for that because I expect more from someone of that sort of caliber.

In short: The art is lazy and the author is capable of doing much better than this.

What does it say when on the VERY FIRST PAGE OF THE COMIC, you find some serious potholes. Who are these people? Why are they fighting? What is the backstory? Why are they who they are? You could say that the author is jumping right into the action, but I personally find it to be really bad storytelling.

Unfortunately, you will find that there are a lot of plot holes in this story that are never explained: From corrupting outfits to mystical powers to that pet Yamiya has, very few things are explained. It's like a game of Mad Libs. A very bad game of Mad Libs, where you have a room full of amateur writers and anime geeks try and write out a story and fail miserably. It's creative to them, but detrimental to those who want more out of it.

It doesn't help that the pacing is absolutely atrocious. We start off blazing fast for the first five or so pages, but for the next fifteen pages; we are treated to watching the former heroine dress up as the villainess she killed. That's almost a fourth of the entire webcomic! (There were 64 pages in total.)

It doesn't get any better from there as we are then treated to watching Hiroko-Chan corrupt a family so they can be her minions, the father takes up one page but the mother takes around seven pages to turn into a dragon; young girl takes ten pages to transform into...honestly, I don't know what it's supposed to be. 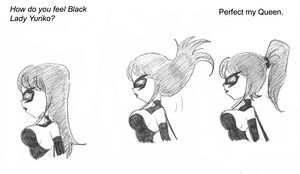 Seriously, what the hell is it supposed to be?

That's another 18 pages worth of unnecessary filler. And when you add it to the 15 pages of watching Hiroko dress up as the villain, you have 51% of the comic being filler; just over HALF of the comic. It is absolutely unacceptable for a webcomic to have that much filler. Especially for one that didn't make it past a hundred pages.

There's one more thing you should probably notice. This webcomic is very clichéd. What do I mean by this? Let's go down the list of anime clichés!

Literally the only thing this webcomic does differently is that it gives the villain a reason to be evil. And even so, it's a terrible reason. (Falling in love with the hunky teen that the other girl gets? Oh gee, I guess there's no reason to be a good girl anymore!) It's so clichéd ridden that it's forced me to create a new genre just for this webcomic. Anime Anime: An anime like comic/product that is so generic and filled with anime clichés that it becomes an anime of it's very own.

You'll notice that there are quotes around the word Characters. Because to be frank, these aren't characters. These are merely bases for characters. We all know the perky school girl and the devious villainess who wears dominatrix like outfits; and we also have grown to expect the cool, mysterious dude that no one knows much about and the quirky animal sidekick that helps out every now and then. It's about the little twists you use to make the characters seem interesting. And they not only fail at that, they fail to either tell you anything about the characters in question.

Who is Hiroko-Chan? Who is Yamiya? Who is Tadoshi? All I know about them is that they have names and lives...and that's it.

Again, it's the fault of very bad story writing. If you can't be bothered to tell me about these characters, why should I bother caring about them in the first place?

Escafa is not just a DeviantArt veteran, Escafa is a DeviantArt pioneer; having joined the site during its third year of operation. He/she/they have been a part of the website for fourteen years and has acquired a pretty sizable fanbase. One of his/her/their biggest draws is the TG commissions where the artist takes a male and turns them into a female. I could care less about that one way or the other, if that's what you want to draw; then I'm all for it.

Escafa also has a Patreon where he/she/they get money from people who like their work and want to request something extra special. (And if we take what LongTom said, it might also be a scam...no evidence on that though.) Overall, he/she/they seems/seem like a pretty nice person with a few notable quirks.

Temptation of Evil is simply an example of wasted potential. The idea of a hero going bad itself is always a crowd-pleaser, but the author destroys the idea by showering clichés onto it and having a bad grasp of story writing. Add in some lazy art with hints of being more and some of the blandest characters I've seen in some time and you have yourself a total disappointment on your hands.

However, if Escafa is reading this: I will say this. Your artwork has improved somewhat since that webcomic, the poses seem more confident and filled with expression, there's more of a variety in terms of perspective and the anatomy has improved immensely. It isn't perfect, but it is at least leaps and bounds better than in Temptation of Evil.

If you wish to consider making another webcomic or continuing (maybe rebooting) Temptation of Evil, I'd be all for it. Because I think with the time off you've had from it and the growth you've had in terms of art (I'm not sure about writing), you would be able to do a decent job overall.

Maybe it's the Temptation of Revival, eh? Eh?