If you know anything about boy love and yaoi webcomics, you are bound to trip over this comic. Honestly, with it’s saturated to shit colors and obnoxious fanbase, it’s hard to ignore.

Despite its weeaboo style introduction to high class prostitution I did not think it was that bad out of the gate.

There were hints that it was not long for the world of decent media, but for me, it really fell apart in the 3rd chapter.

We have a nervous newcomer to prostitution go from being creeped out by his silent, virgin obsessed client to “Oh gosh he’s so hot” for no other reason then the fact he forced his tongue down his esophagus.

We are then hit over the head with a nice-guy love interest who turns gay JUST for pretty girl boy, and showers him with compliments. Yet it couldn’t be more obvious he’s just there to dial up the angst for the TRUE relationship. So what’s the true love we’re supposed to be rooting for is doing while his darling is getting cuddles? He’s repenting for his manipulative and emotionally abusive behavior by looking sad.

How dare he be making me money and enjoying himself while I go home to my PREGNANT WIFE boohoo!

It’s pretty much a gay sex soap opera in a high-fluent brothel in pseudo-Victorian England. The money they make goes to their pimp not them, they live on the establishment and can’t leave unless on special escorted trips, don’t have a choice in who’s balls go in their mouth, and can be sold. So yes it’s about sex slaves. It’s fine to have a brightly colored jealousy buttfuck drama, but none of them yearn for freedom, or autonomy. To have an experienced prostitute’s biggest problem being, “My pimp cheats on me boohoo ” shows a big disconnect with the gravity of the setting and material they chose to deal with. These characters and plot lines should have been set behind the high school bleachers not a Victorian brothel.

Teahouse doesn't really care about much besides riding their yaoi clichés and they ride them with greater skill than the jaded prostitutes they have no idea how to characterize. Though to be fair they work outside the yaoi box by having several female characters. Yet most of the women are there for teh jeluz.

Like many a writer the author wants to cherry pick pieces from a time period.

You don’t need to know everything about a historical period to make it effective. For instance if the authors didn't know they didn't use paper money in Victorian times. Hey no biggie! The trick in creating pseudo-historical settings is to not add anything that would break your immersion. Here, the immersion gets broken here more times than ukey’s heart! Plastic trash bags existing alongside horse drawn carriages sure makes sense!

Let me give you the main sore thumb in this story. There is a main character who is punk rock man child (with piercings, tattoos, and dyed hair) who happens to be the highest earner in a Victorian era brothel that serves the wealthy and powerful. If you’re so hellbent on adding fetish fuel to this sputtering fire, Nazis would make more sense!

Let’s move on to the way it botches its content.

Allow me to sum up the story. It mostly revolves around these three couples, but it’s saturated with tons of unnecessary characters which are there mostly for the jealousy. The following are the main “couples:” 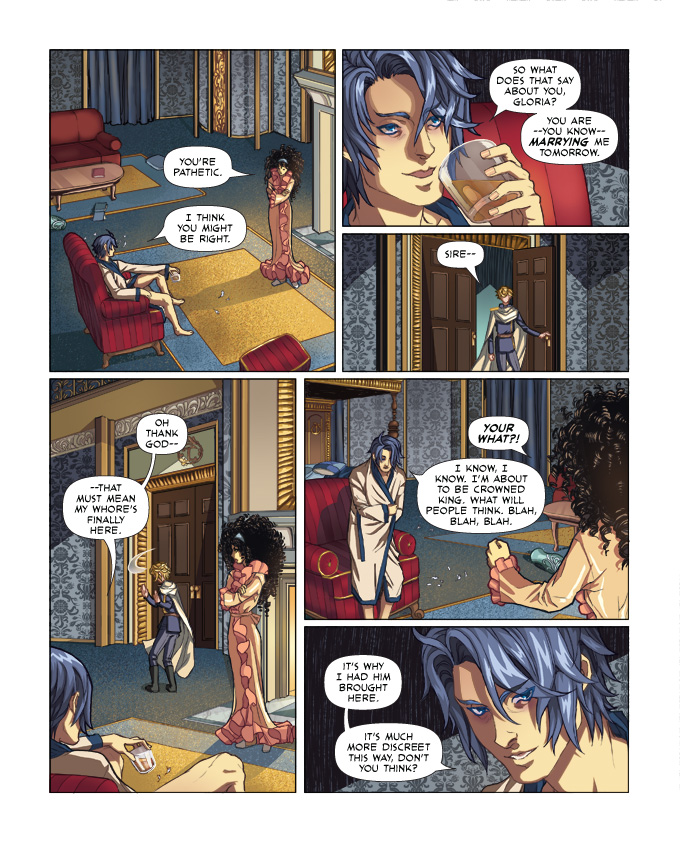 The authors claim the story was inspired by a reality TV show, and boy is it apparent.

The logic is backwards, its terribly inconsistent, and there is a lack of basic sex worker knowledge…in a story about sex workers. Allow me to regurgitate some examples of this:

You can’t expect people who write about a brothel to know anything about sex! Tell me about the story, I’m sure that’s where it shines:

The to-be king of a nation hears that his younger sister has paid for relations with a prostitute he uses. He stomps over there personally to defend his sister’s honor and without explanation clocks a man who is clearly more physically fit. He knows full well the prostitutes cannot turn down any possible customers because the prince himself forced the offending prostitute to submit to sex with him. During this confrontation, the prostitute then makes disparaging remarks about his sister’s sexuality. Which makes the prince incredibly….horny? After some less then shocking excuse for sex we end with the most cliché expression of affection. So not only are there no hard feelings but not just him but the prostitute he punched is charmed by the whole affair? …alright then.

Oh yeah and king-to-be told his sister to go to the brothel in the first place.

They keep piling on characters without explaining much about any of them. 150 pages in we have around 20 or which are mostly involved in love octagons. The story moves forward without much back story for any of these characters, and scene transitions happen suddenly to things totally unrelated all the bloody time.

Nothing wrong with enjoy a bit of the yaoi, hell I enjoy an occasional manga, but isn’t the ugu factor here a little distracting?

Everything from the minor details to the setting and plot is done for, “teh smex.” The majority of the characters are totally unlikable yet we are expected to feel sorry for them and root for them to ~be together forever~ with docile ukes without rights?

So lets get into the nitty-gritty of why these characters are awful.

Hey now Fapsy, writing characters as perfect angels is boring! That’s true, one of my many inner voices, but the problem here is that few of them seem to have any positive aspects.

Most of the male characters are petty, bratty, man-children who we should feel sorry for when they have temper-tantrums after getting what they want. Behaving like adults is so unkawaii! It’s more situated for a playground than a whorehouse!

There is one interesting deviation. Lillith who looked to be the frost bitch of the brothel, but has hinted depth. So far it has just been used to help us feel sorry for a man child, but perhaps something more will come of it.

The only way the author knows how to show “depth” for these characters is by making them look sad even though you’re only guessing at what has made them sad. They ALL deal with their problems by storming out in a huff. The tops here do whatever the hell they want and have no consequences for it, yet the bottoms bend over backwards (in more ways then one) for their ~soul mates~ and end up shitted on anyway.

Let me give you an example. The couple with the most focus is that of Linneus and Atros.

So Linneus, your soul mate Atros, called you his personal whore so you refuse to make him money for a day. Good for you! …Wait a sec, you ended up making money for him anyway because he looked sad at you? Then you apologize to him even though he didn't have the balls to apologize to your face. What are you apologizing for anyway? Being mad when he treats you like property? The only thing you did wrong was cave in like house of cards, on the only way you can stand up to him.

Oh that’s not fair he also stood up to him by not having sex with him. Oh no wait that was because Atros’ wife is pregnant. Double that oh no because him refusing sex leads his pimp to attempting to sell him to a man he suspects of physically abusing him. I’d take the deal, it’s better then putting up with that massive smeg-head.

Not really seeing why we should want them to be together.

The art is pretty dang good. Great concept of anatomy, good use of lighting, nicely used perspectives, and wonderful backgrounds and environments. Unlike a lot of BL comics they do a decent job at differentiating the chins and body types of the characters. They still fall into a few yaoi art traps. Such as long necks and really distracting overly-feminine characteristics like pouting duck lips and enormous eyelashes. 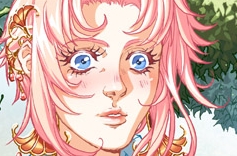 No this isn't a horror comic.

However the artists know they’re good and sometimes they’re too flashy about it. Such as over designed outfits, saturated to shit colors, unfaltering use of color theory, overly busy scenery, and even excessive details on minor background objects. 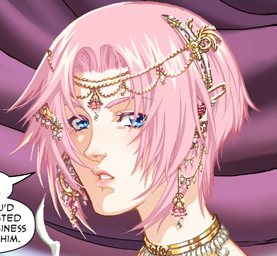 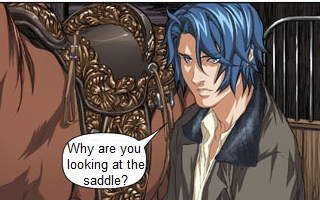 The color wasn’t so bad at the beginning but has gone in a solid ~saturation and clashing~ direction as shown below.

They also have a problem with consistency. Such as fluctuating skin-tones and hair colors of the characters every now and again.

However its pretty good overall.

The comic of teahouse is a collaborative work between two ladies, E and CC. E does the lineart, while CC does the coloring and the writing for this story. Usually they talk as one entity, “Emirian” so it’s hard to differentiate the subtleties between the two, however they both seem to have similar interests and ways of dealing with fans and dissenters.

Don’t let their fangirlish squealing about soap-operas or their own characters fool you, they are both middle aged women who have work/worked in the art field in a professional capacity.

These ladies do not seem bad at heart. Let’s face it, one of the most irrational and childish fan bases you can build yourself if that of Yaoi so they do deal with some bratty behavior. However…they behave incredibly immature, and shoot themselves in the foot at times when it comes to public image issues.

They have threaten to quit the comic, not over sharp biting criticism of their art or story-telling abilities but over fans complaining they don’t update enough. 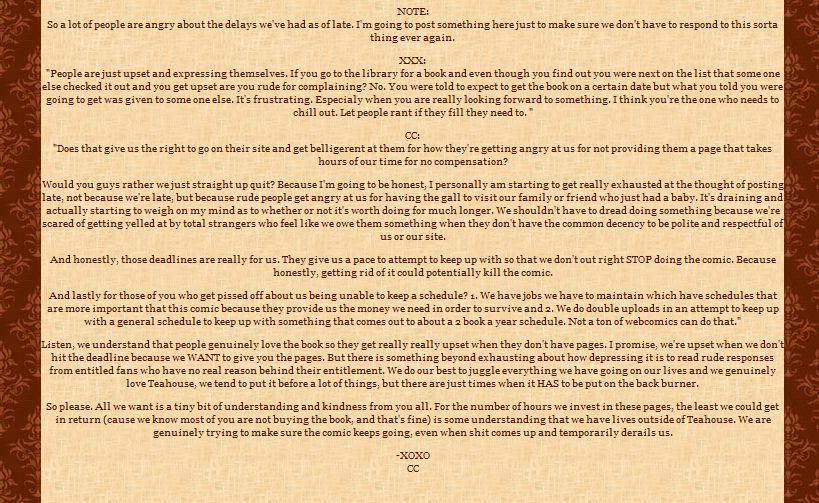 Okay that was a bit immature, but they did apologize for it. What do you mean shoot themselves in the foot? First person of color character is a background maid? Let’s make a big deal about it that can’t go wrong! 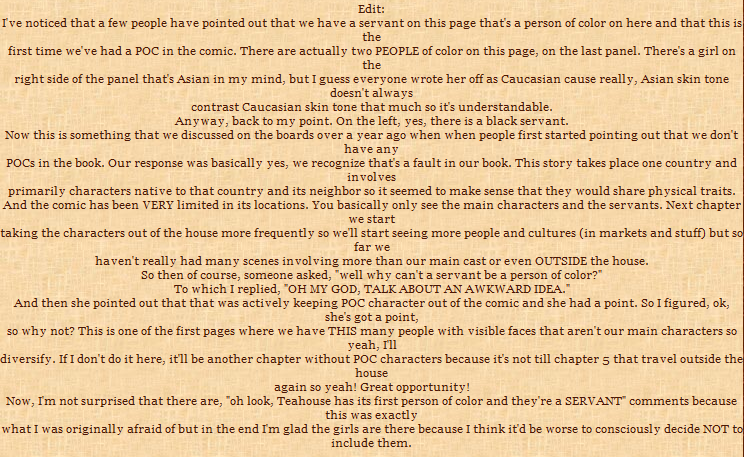 They seem to believe people who dislike their comic and make fun of it is brutal bullying.

The most telling of this would be how they dealt with fans who have concerns about the content of their work.

When one individual expressed concern about the abusive undertones of a relationship we get, “GIRL, HE LOVES HIM!” 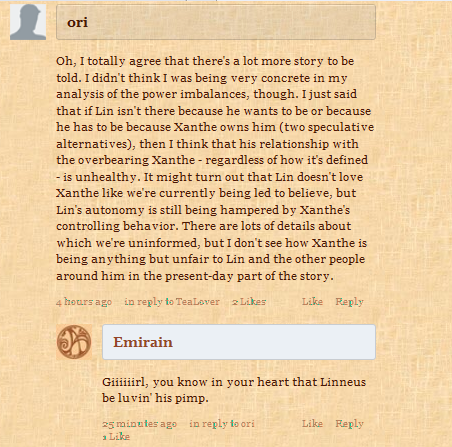 However I've saved the most telling for last.

An individual expressed concern for the way a prostitute character had been treated by his John.

That’s right, “It’s not right for him to treat him that way. ”SHUT IT! IT'S COOL CAUSE HE’S HOOOOOOOOOOOOOOOT!”

Well, thank goodness. It could not have come any sooner. At an end your reign is. And not short enough it was.

Baroque spank fodder with no concern for story that should have been set at a middle school gossip club than a Victorian brothel. It’s a very run of the mill yaoi done up like a French whore.