Well I came across this comic while I was lurking on the forums a while ago. I briefly glanced over it, sort of regretted it. The art was an immediate turn-off so I left the website very quickly. However, after seeing no one take of the mantle for reviewing it, I decided it was time to get my hands dirty and dive into this monstrosity myself. Someone's got to do it. Hell, maybe it wouldn't be that bad. Maybe it's actually a well-thought out story masked by the awfulness that is its... "art." Maybe it's just an ugly duckling looking for... what the hell is this?

Look, I thought that maybe, this comic was just, well, sub-par. Not really worth mentioning. But the deeper I got into it, the more I realized... what is the POINT of this? ANY OF THIS? Why would the authors think the world needed to see this?! No, as much as I could try, there is nothing redeeming about this comic. I couldn't add extra points for the plot, the writing, characters, nothing. Everything just adds up to the fact it is truly something to be avoided. But no. Here I am. I am going to tell you why.

All right, I want to say it just sucked from the beginning. But no. I want to be more precise. Obviously the art is a turn-off, but we'll talk about that later. Oh how we'll talk about that later. I'm going to pinpoint the downfall to this page. Why? Because it has nothing to do with the previous page. On the previous page, Kimmy AKA "Tabby Cat" is complaining about having to write a paper. Then we turn to this page. There isn't even a segue into it, it just... appears. I guess we're supposed to assume that Tabby Cat got called out to fight this... super villain person. They trade some badly written insults, but it gets better. I mean worse. Because the next page is this. And I don't know what the fuck is going on or what they're trying to imply happened. But from here it is a downward spiral into "what-the-fuck-ville."

So the basics of this comic, is that it's sort of a slice-of-life comic with a superhero twist. Kimmy and Sarah are best friends in college, but little do they know, they are both super heroes! Or at least, one's a superhero. The other is a villain. So they fight each other all the time... something like that. It's... an all right premise. Maybe could be made into one of those TV shows on ABC family that might run one season before being canceled because no one gives a fuck. And you know, maybe they could've made the story entertaining. Problem is, IT'S FUCKING POINTLESS. I don't know about anyone else, but I like reading webcomics for enjoyment, entertainment, amusement, and other related things. This... this has none of that. I don't know what this has, but it definitely isn't that. I feel like my life is wasting away by reading this drivel. If I had a reason to care about the characters, maybe, maybe I could give a shit or two. But every character is pretty much just... well I don't even know what to call them! The only ones that have a semblance of personality are the ones that are stereotypes (Kimmy, the retarded cheerleader... thing. Sarah, the brooding emo chick. Dark Falcon the... wait, no one gives a fuck.)

For the first chapter we're treated to a story involving Tabby Cat and Silver Streak (Kimmy and Sarah, respectively) going at it and also trying to be college students. Which would be fine. Aside from the fact the only problem they seem to have is not writing a paper for English. Even though one is an English major, she is apparently unable to do it. And not only because they're busy fighting! No, because they are both just... procrastinating. EXCITING SHIT HERE. I DIDN'T GET MY PAPER DONE BECAUSE I WAS PROCRASTINATING. NOT BECAUSE I WAS FIGHTING SUPER VILLAINS. And so the anticlimactic end is Kimmy pulls an all-nighter to finish the paper.

Later the comic goes into some shit about high school or some shit. Which also make no freaking sense. So it's sort of like in Sky High, where teenagers go to a high school specifically for super heroes. Except... they only get sent there because they are physically different. They don't have to have super powers or anything, they just have to look fucking retarded. Also, apparently in this high school you can study superpowers, and choose one as your major. Fine. Maybe I can accept this. Except that NEITHER TABBY CAT OR SILVER STREAK HAVE ANY DEFINING POWERS. Tabby Cat's power is having cat ears and a tail. Sure, makes sense. Good luck fighting crime looking like a goddamn weeaboo. And Silver Streak's power is... being silver, or something. Later she gets the power to... shoot lightning? She learns it by asking a question during class that makes no sense, and then is unable to move her legs for some reason so she scoots away.

On a final note, if they are superheroes, what the hell are they even doing? They are never shown fighting crime or anything, just each other. One time Silver Streak goes to a bank to... blow it up for no apparent reason. Also, Tabby Cat is apparently alerted to Silver Streak's presence by something called... the Tabby Phone? Seriously? Who the hell is calling the Tabby Phone? And why is its only purpose to say when Silver Streak is around?! Is she that dangerous that there is someone out there keeping tabs on her?! If so who the hell is spying on her and has Tabby Cat's number?! THIS DOESN'T MAKE ANY GOD DAMN SENSE!!

Also, what is the point of this? Aside from existing to give me nightmares.

I don't know if I can define what this comic has as visuals as "art." It... it really can't live up to such a word. "Shit" might even be over glorifying it. So I think I'll just call it "images" as a neutral-ground term. That might be stretching it, though.

I mean, seriously. Look at this. LOOK AT THIS. WHAT IS THIS? WHAT THE FUCK IS GOING ON?

It... it's painful. It's true-to-god, eye-searingly painful. But we're going to get through this. If we stick together, maybe we can overcome it... 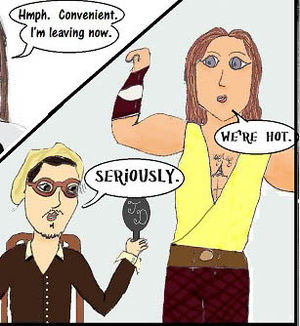 Well, it'd be silly for me to point out ever god damn thing wrong with the art. Let's start with the big picture. EVERYTHING IS WRONG WITH IT. People are melting, facial features float everywhere in that space loosely defined as a face. It is just a mess. Background don't make sense, though I guess I can go out on a limb and give props for TRYING to do backgrounds. Even though they rarely help and I sometimes don't even know where the hell they are. Everything about the images is abysmal. Drag queens. Disappearing feet.Rubber legs. More drag queens. Tabby Cat gains 300 pounds. Some poor girl who ate too much sawdust. Men with chocolate milk mustaches. Drag... humanoid bugs? Possessed Roman soldiers. Retarded... HOLY SHIT WHAT IS THIS?! IT'S... I CAN LOOK AT THIS?! Scratch that, that's a guest comic. That's right. They get guest comics. And fan art, apparently. Most of which is better than the scribbles they themselves call a comic.

Also, I think Dark Falcon is supposed to be a boy. Unless they're all lesbians.

All the men look like women. Or look like they are in drag. Maybe its all of those well-defined lips that everyone has.

The writing is barely more tolerable than the art. Or it's just as bad. I haven't really decided yet.

I think the only person who has any sense in this entire thing is Silver Streak. Incidentally, she points out some of the flaws of the comic herself. Maybe she's realized she's in one of the worst webcomics ever, and knows there is no escape. So now she must make the best of it by ruining for everyone else. Or at least, trying to. Everyone else is too dumb to understand. 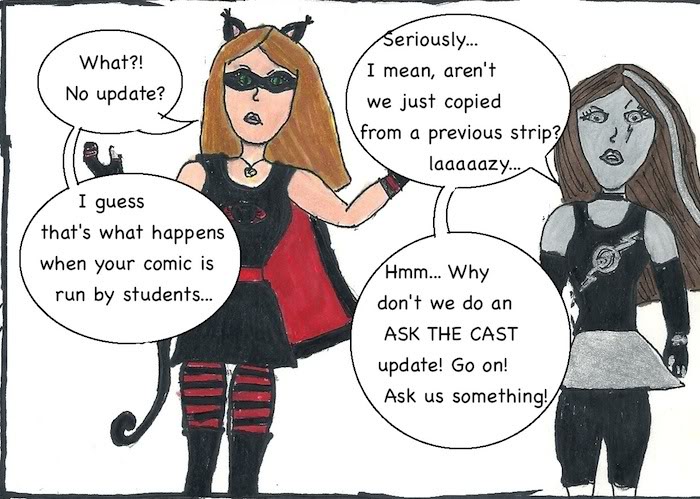 Though even she has a case of the dumbs. Really? Ways to annoy the Tabby Cat?

Like I mentioned before, none of the characters stand out. What I've gotten so far is that Tabby Cat is the dumb blonde. Silver Streak is slightly smarter but still just some brooding emo kid because Tabby Cat stole her boyfriend or some dumb shit. Dark Falcon has no personality, he's just there for Tabby Cat to make out with. The other characters aren't even mentionable, except Psychic Kid, who has a name even dumber than Tabby Cat's. These are supposed to be superhero names. If you were a villain, would you ever tremble in fear of someone called "Tabby Cat?" Or "Psychic Kid?" Silver Streak is a slightly more reputable name.

There's more things I could go into, but these are the basics. Other things include Getting in a fight and somehow ending up going to a convention together even though they're enemies. Bringing nothing new on arguments about superhero identities. (Is this trying to be ironic or something?) They get stuck in traffic and not a fuck is given.

Surprisingly, this comic is created by two people. Yes, it takes more than one person to create a pile of shit. What is this, The Wotch?

This is where the self-insert thing comes in.

See, the authors, or at least their web-aliases as far as I can tell, are Kimmy and Sarah. Yeah, the same names of the two main characters of this webcomic. I tried to find some information about them, but the most I could find is either in their author's comments or FAQ page.


A semi-autobiographical comic about two college students and their alternate lives as superheroes.

All right, I get where the slice-of-life shit comes from. And I guess they were just trying to spice it up by making themselves superheroes, or something. They seem like nice enough people. And they seem to enjoy working on their comic. Kudos to them and all, but I just have to wonder why they thought it was a good idea to put it online. It's one thing keeping a comic in between friends, having something to giggle about together, but it's another to put it online for the world to see. Once it's up, you've subjected it to the eyes of many observers. Or at least, those who can get past the images.

A lot of people come back with "Well if you don't like it, don't read it!" Well if you don't want me to read it, why did you make it available for me? You put it up to the public, and so someone's bound to hate it. What I'm trying to say is, WHY?!

There is nothing good to say about this comic. It's truly a masterpiece of hideous proportions. Even now I continuously ask myself, who thought it would be a good idea to reveal this to the public? Do they look at this, laugh, and say what a piece of shit it is? Or do they think it's actually good and that people would... gulp... enjoy it? I can't seem to comprehend the thought process behind this.

So yeah. You'll probably lose a few years of your life if you read this. That's why I made the sacrifice. So you wouldn't have to.

UPDATE: "Teacher's Pet" has been put to sleep. Yay!