Okay… I did not want to do this review; I felt that I had enough with last review. But since nobody else wanted to take this, someone has to do it, not? Anyways, if you remember the School Days review, I mentioned that comic like “the second one of this type of perversion that I found around that age”. Well, this webcomic is the first one that I found, around a year before of School Days. What a luck, don’tcha?

Well, re-reading this… “Thing” made me discover that is slightly worse than School Days, since we have a really big difference with it, but we will to go into detail in the review itself. Let’s begin, not?

It´s basically the same scenario of School days, aka in an ELEMENTARY school, but this school is little more public, aka is full of graffiti in the walls, but still all the students wear uniforms. Our protagonists are Alvo, a “whale”-dog that has a big secret, and Mira, an emo bully cat girl, and their sexual adventures in the school. Like the School Days review, the things that happen here are breathtaking; but since I don’t want to do an essay or link the pages, you know what is coming, not?

Welcome again, coworkers, to the second lesson of the MRT class. Today’s theme we will touch is the literary-visual cognito-hazard called “Target Miss”. This cognito- hazard is a black class, so a minimum of level-9 of mental hardness is needed. Like the last class, this cognito-hazard is censored for the class. If you’re not sure you can handle it, you can leave the class now, last chance… Well, procedure will be the same of the last class, but increasing the dose at least to double. The format of the presentation will be the next:

If you feel nausea during the class, please use the paper bags that will be provided right now. The janitors already told me that will not clean the disaster since the last time… Let's go, then.

Synopsis: Mira discovers Alvo’s secret and takes advantage of it.

Synopsis: Mira and Alvo have relationships on an abandoned construction site.

Synopsis: Mira and Alvo invite more kids, and the school staff starts an investigation of this.

Well, this is the last cognito-hazard of the day, so congratulations for the one that make it. If someone is left with sequels, the psychiatrist onsite is ready to serve those involved in this class. The review will come back to normal in the next section. Have a good day, if you can.

Like School Days webcomic, the art is the only redeemable thing. But the difference with the same is that this webcomic is much more “cartoony”, maybe is a little too much. It looks really kiddy, to the point that is hard to try to figure out how old the characters are. But since this happens in an ELEMENTARY School, it's obvious their age, especially in one page Alvo says explicitly that he is 10 years old.

All the art is in digital black and white style, and this can be confusing in some pages, especially with the distribution of the panels of pages, where most of them are asymmetric and usually diagonal. There is an example: 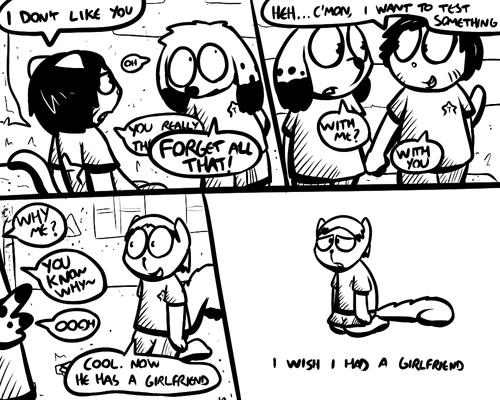 The only pages that are in color are the covers of the chapters. I would have talked about them in the previous section, but there is nothing worth to mention. It’s just the principal duo hanging out, every single one. I guess it’s for the unwary to trust that is something wholesome.

The first thing you notice before reading the webcomic, is that the author does not take seriously this theme; since in the archive of the chapters there are parody reviews mimicking the one that has commercial movies, and one of the is done by the Child Protective Service . With something like this, you know this will going to get ugly. Other proof of this is the dialogue, since is so unnatural. Is basically what you would expect from sexroleplay, here some samples:

But this is only the start. There other things that broke even more the suspension of disbelief: the fact that the trauma bunny somehow always encounters the duo fucking; the school’s principal not entering in rage before the information that kids of 10-12 years old fucking; that the only kid that have common sense and knows that is bad do that things at that age is Focada; the nurse that don’t gives a fuck about the situation, even if Alvo clearly confess in her face that he is sexually active; trauma bunny doing a drawing of the principal duo fucking to alert a teacher, but she is too stupid and blind to recognize it.

But the two worst things about the comic (and probably make you puke) is 1) Alvo’s real secret, how I will believe that a dong of not more than 5 cm can produce enough “cream” to cover Mira entirely. In the 4th chapter is worst, since Alvo was in abstinence, and when Mira touch it… well, the most accurate thing to describe it is “IM FIRING MAH LAZER”. I don’t know if I should laugh or cry because I have to see it. Not sure if it's even a fap material. And 2) the school’s counselor, *Sigh* Look, with Ms. Trousers in School Days you can have doubts about her tastes, but with this man you can’t. His internal monologues and Machiavellian plans make it obvious. About the plans, he contact with his accomplices with his laptop… In his office, in middle of his workplace. A genius plan, I am right?

Pokehidden (Onihidden, Pokefound, or whatever calls himself now) is a Brazilian artist and animator since 1997. Like the name suggest, much of his work is has pokemon in it, and of course cubs. He also is a brony, even has a ponysona called very originally Ponyhidden, adding to the chaos of names. He usually represents himself and his ponysona in a snowy place, for some reason. According to Wikifur, Onihidden draws on a Nintendo DSi with the DSiWare application, Flipnote Studio, whereas he would export the finished art to his laptop, at least he did it before. 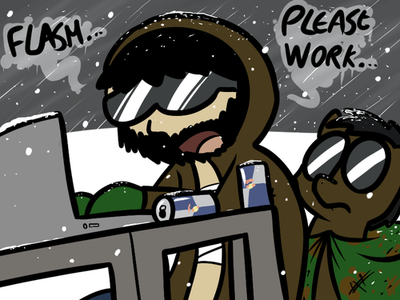 The author and his ponysona

Well, if looked before, the author has a lot of nicks. That is because at some point he deleted the website and closed his Tumblr page. I witness that, but I’m not sure of why he do that. But around the second half of 2010’s decade is where the public started to inform to this type of content, I get an idea of what happened. After that, the next thing that he did is get off form the internet forever… Or at least I would say forever, until recently he come back after five years, opening a Twitter, Inkbunny and Mastodon page under the name of Onihidden. In E621 link his art linked like Pokefound. There are even rumors that he has intentions to do a sequel of Banned from Equestria (Daily), but with G5 characters.

But luckily there are no hints of bringing back the website. Wait, so why to do a review of webcomic that is gone? Well, is because someone did an art archive of the website. There is also someone that did multiples screenshots of the website and updated it in Wayback Machine since 2014. There is a person that makes sure of keep this webcomic in internet and that where you and I should worry.

*Cof cof* Oh fuck, there is blood in it. Anyways, I like the art of Pokehidden, when it not has cubs, feral Pokémon or feral ponys fucking. Pitifully, those three things is the majority of his portfolio. This webcomic is the worst example of the first thing, and if you want positive side of this, read the conclusion of the School Days review, it’s the same; oh, and also there no incest in this comic, so it’s something, I guess. Now, call an ambulance. Immerse myself in my traumas again it didn’t do me any good.

I will not link anything of Pokehidden, Onihidden, Pokefound or whatever is his name now.