It's an "Orange Man Bad" webcomic... if you can even call it that. This is basically a comic version of The Resistance™ against Trump, AKA some random SJW whining that the orange man is bad and you need to know that he's bad. It was only a matter of time before TRUMPed (Resist) was discovered by this wiki.

Did you read any of the things written above? This God-forsaken thing was never good to begin with...

The "art" is... well, it's not there. This webcomic is made from press photos (of which sources are never attributed) with a bunch of speech bubbles, maybe a Photoshop filter or two. That's it. As noted by one of the wiki forumites: "This shit is LESS creative than Darth and Droids."

It's about as creative as the art.

Well, ok, that's not actually true; it's somehow even worse.

Though, to clarify: This is satire. It's just really bad satire. It's political satire as written by a five year old where they take a random picture of someone they don't like an add a speech bubble and write "I eat poo poo". That's really about it: This webcomic puts speech bubbles onto pictures of Trump, his cabinet and his family, making them say the exact kind of vile and ridiculous shit that Trump-haters wish that Trump and company would say because that is clearly the most hilarious shit ever, right?

Just imagine the most deranged "Orange Man Bad™ activist, and then imagine what such a person wishes (or legitimately thinks) Trump says and does. That's the writing for this webcomic.

Basically, its terrible. It's not even funny - and at times it's very creepy, like the mini-arc called "Wet dreams may come" which opens with a Photoshopped naked trump who wants to fap to Fox and Friends. Of course, that's not bad enough, because next page we get a Photoshopped Trump wanting to fondle and molest his daughter. And you think that's bad? Nah - two pages later the speech bubbles tells us Trump just fucked his daughter in front of live cameras for ratings (and his raging boner).

As noted previously, this webcomic is basically what anti-Trump lunatics dream that Trump would do - or think that he does in reality, it's hard to tell. Either way, it's shit. It doesn't tell anything that resembles a good story; hell, it barely even passes for political satire. 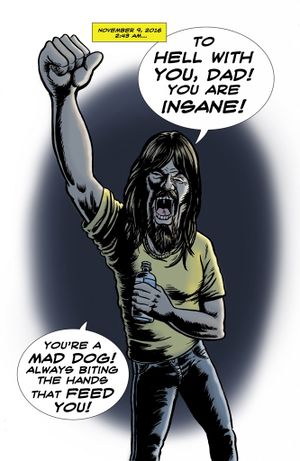 From rawdale's Comic Fury profile we learn that he's apparently a illustrator/graphic designer (that clearly can't draw) living in D.C., who's done a bit of comic illustration, but apparently not enough that he can point to anything specific.

To make things worse, he does operate other webcomics, like the one about Jesus running for president in 2016, which is another anti-Trump comic, but he draws that shit himself - as shown here to the right.

This is a dumpster-fire of humorless bullshit. It's not funny - frankly, it never tried to be; it (and by extension, the author) displays the emotional maturity of a 5-year-old who thinks crudely-drawn doodles of stick figures saying "cunt" again and again is the absolute pinnacle of comedy.

There was clearly no attempt in making any kind of coherent narrative, let alone telling any kind of story (however untrue it may be). You can practically feel how rawdale sat, frothing at the mouth, wearing a pink pussy hat and a rainbow-colored "Resist" T-shirt while "creating" this comic, thinking he's the greatest genius ever - all the while demonstrating the webcartoonist skills of a lobotomized goat.

This is exactly the kind of webcomic this wiki was made for: It fails at communicating any kind of story or message whatsoever, it doesn't even try to feature good artwork, its maker thinks the best thing in the world, and it's dripping with hatred; in fact, that hatred is TRUMPed (Resist)'s only reason for existing in the first place. This is a soap-box comic of the very worst kind. This kind of content would work just fine as random anti-trump posts on reddit to accompany blog posts, not as actual comics, especially not when rawdale demonstrates his demented lunacy by writing a comic about Trump molesting his own children.

Compare this to the pro-Trump webcomic Day by Day (also reviewed here), where the Trump and politician caricatures are actually drawn, and the gag-a-day format doesn't try to make you claw your eyes out from Photoshopped Trump nudes, despite also featuring nudity every now and then. Opposite political favorites aside, this webcomic and Day by Day are basically on opposite ends of the spectrum of good vs. bad quality political satire cartoons, but at least Day by Day has an artist who tries to do art and make it into a comic (even if its bad).

Other webcomics rawdale has sharted out: