Originally, I wanted to do a review of Chris "kirbopher" Niosi's TTA, a combination web comic/Flash animated series that was all the rage on Newgrounds back in the day when video game parodies, celebrity murder simulators, and toilet humor were all the rage. Unfortunately, I couldn't go even five episodes into that shit before the demons in my head started crying for blood to make the pain stop. It was shortly thereafter that I discovered TOME: Respec, a reboot of TOME (which, itself, was a reboot of TTA). I thought I could weather this shit a bit better.

I was right, but only barely.

It had to start some place. That place is the bottom of the trash heap.

This comic was over twelve years in the making, so a bit of background is necessary.

In the beginning, there was TV Tome Adventures, or TTA for short. What was a TV Tome? It was like Wikipedia or TV Tropes before they existed: a community-run encyclopedia that specialized in information about television shows, from series synopsis to character profiles. Christopher Niosi, better known by his handle of "kirbopher", was a member of this community, and used his online roleplaying in the site's forums as inspiration for TTA, while tossing in edited sprites with limited animation (his own avatar essentially being just an albino Sword Kirby).

Because it was a heaping load of crap, of course it took off like wildfire on Newgrounds.

It didn't get much better.

Eventually, it was rebooted in the form of TOME, ditching the "TV Tome" namesake since that site had vanished from the face of the net. Gone were the shite sprite animations, replaced with crappy Flash animation. The one upside is that the character design of Kirb was no longer an unoriginal piece-of-shit...but that's like adding sprinkles to a dog turd: it doesn't matter how shiny it looks, it's still shit. 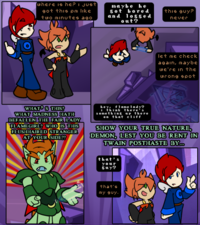 Sadly, many pages have not been recovered at the time of this writing (May 2, 2016). What I have is based on what I've scrounged from the Wayback Machine and could glean from the tumblr page's archive and its tiny preview pics.

The story takes place in a virtual reality massive multiplayer online roleplaying game called Sword Art Online The World Terrain of Magical Expertise, or simply TOME. The protagonist is a newb known by the handle of "Alpha". After logging in and jumping into a high-level PVP area like an idiot, he gets contacted by a mysterious voice, then ganked by some asshole named Kirbopher.

Alpha respawns in a graveyard, where he meets a female player named Flamegirl, who enlists him into a group of anti-Kirb players, including an overly dramatic dragon-ish character named Nylocke. The group soon find Kirb and his goons, some blue blob with a hat and sunglasses and a furry with bombs. They all go at it until Alpha gets blown the fuck up.

Alpha then finds himself in some white void, where he finds the source of the weird voice from earlier: some blob with promises of power. After telling Alpha about how Flamegirl and Nylock teased him, he decides he'll show them! He'll show them all! He accepts the blob's power and goes all evil and shit.

The comic hasn't been updated since. The story of TOME continues on from there...but if I try to watch that tripe, the demons in my head will win.

The thing to take home from this is that the story is highly derivative and unoriginal to the point of mental exhaustion. There's no harm in taking inspiration from your favorite cartoons and video games when making a story, but when you rely so much on tropes and cliches when making your story...well, I'd be better off just watching SAO or .hack// than sifting through this tripe.

I could design better characters after chasing down LSD with a fifth of Fireball.

The art is very simplistic. The character designs look like something out of an amateur's newspaper comic, and the backgrounds look like an afterthought. Really, there's not much to say about the art other than it's...well, bland.

This comic has a worse problem with typefacing than TV-Nihon fansubs: every character has a different font in which they speak (with Alpha having two: one for thoughts and one for talking), which, in addition to the layout of the comic's dialogue not being very organic, make it hard to read. The typeface for the mysterious voice, in particular, is a chore to read. It's a fucking mess.

There's not much in the way of humor that I could glean from what I've found, since most of the comic pages are still lost to the aether and the preview pages on the archive are only legible to ants. The one instance I found was pretty forced, though: Nylocke going into a dramatic tangent and falling over mid-sentence. Obviously, humor is not this author's forte.

Tragically, Bryon "Psyguy" Beaubien (featured on this site three times, man!) carved a massive swath of destruction through the lives of many victims, among them one Liz Losey. Typically, when one is subjected to abuse, one of two outcomes lie ahead of them. One outcome is that, knowing the hell one suffers from when abused, they wish not to have that same mistreatment inflicted upon others. They read up on abuse, the kinds of personalities that make for abusers, and reach out to other victims, forming a support network that strives to better their lives and to help others in similar situations. This was the path that was taken by another author featured here, TL Welker of Heartcore fame.

Liz took the other path, and became an abuser herself. One just as bad as Bryon, if not worse in some respects.

The laundry list of shit this googolbitch has pulled are long and myriad. They include, but are not limited to taking up shelter in a friend's house and making the lives of everyone in the house a living hell, and stalking and torturing another of Bryon's victims: Shannon, the 13-year-old Bryon abused.

As for the asshole who originally created this shit: I wish, I FUCKING WISH that I could say Chris "kirbopher" Niosi is just some random schmuck on the internet, one who was a bit too fond of Megaman: Battle Network and .hack// and shat out some dumb Flash series on Newgrounds who faded into obscurity after a year or two like many other aspiring Flash artists and went on to get a day job and live out the rest of his life as just another normal guy.

I wish I could say that, but I would be lying. Chris Niosi is a semi-professional voice actor whose voice has been featured in some anime and video games (most non-union, since he is a notorious scab). Liz worked with him on TTA and TOME and touched his dick at one point, and the two have been dangerously co-dependent on one another ever since, even after breaking up. He also participated in bullying Shannon, at one point nearly convincing her to commit suicide.

...so yeah, fuck these assholes.

If it was shit before, it'll still be shit when it's re-rebooted. Thank god this webcomic is so short...