This webcomic was brought up on the BWW forum as having been listed on the TV Tropes list of horrible webcomics. I did not have to read too many strips to figure out why it was included on that list.

This webcomic was awful from Day One.

Not applicable, as this is a series of gags.

Line art with flat colors and some shading, though surprisingly not on the faces. (Why do so many artists fail to realize this flaw?) Most panels have either no backgrounds, or only partial ones, which ironically is a disadvantage when the characters and props are in strong colors, because it produces an over contrasted effect: 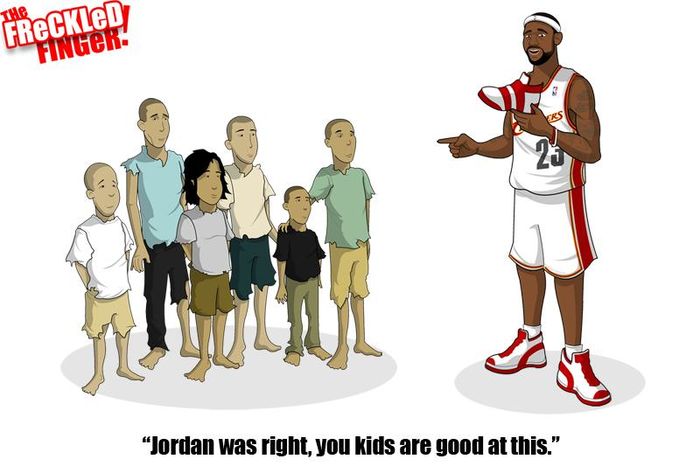 Well, nobody can say that this webcomic lacks diversity!

At least people look realistic enough, with exceptions like this terrible caricature of Mother Theresa or Mohandas Gandhi.

Also included in some strips are copy-pasted brick walls. I don't know why the author didn't see fit to just draw even minimal backgrounds for his pictures...but then again, I don't know what he even bothered to draw this webcomic to begin with.

So what kind of jokes does THe FReCKLeD FINGeR have? Some examples:

WHOPPER FREAKOUT A movie reference? Shocking without being clever.

GEICO Stereotype of Mexicans being reckless, I guess.

WE GOT CHARLIE! Wonder what Vietnam War veterans think of this?

BACK TO THE DOCTOR A reference to the fact that Michael J. Fox would get Parkinson's disease later in life.

THE WIZARDRY OF BUSH A rare actual political joke in this webcomic. And outdated as hell, considering that this was done long after Bush left office.

As indicated by the above cross-section, the author evidently just throws up whatever idea pops into his head without checking to see if the joke is actually good or not, a la Eyre Toons. Also, as mentioned above, the author seems to be erratic not only in his jokes but in his webcomic's very tone. It vacillates between horror and shock humor to social and political commentary to pop culture references...the reader doesn't even know what to expect from panel to panel.

The author didn't even bother to sign his panels, and his webcomic is long discontinued, so there's no point in doing any more research on this person.

Here is what TV Tropes has to say about this webcomic:

THe FReCKLeD FINGeR has a very good, professional art style. Too bad it's aggressively unfunny, needlessly offensive, and as spiteful as humanly possible. The bald-faced contempt for all that feels joy is clear in the writing, making every single strip a soul-crushing experience in and of itself. It's often described as "Cyanide & Happiness if it took itself dead seriously".

This description gives this webcomic too much credit. Yes, it is occasionally inappropriate and offensive, but most of the time THe FReCKLeD FINGeR is simply random and the jokes fall flat. The webcomic tries to be shocking, but more often it is confusing or just plain dull.

UPDATE: Not only is it gone from The Duck Webcomics, all other traces of this webcomic seem to have vanished from the internet.