Did you ever hear of the term “Boomer comics”? The ones that always complain about the actuality and the youth always is doing everything wrong, usually in one panel? If both responses are yes, then the response is: Do you believe me if I say that there exists the concept of “Boomer Webcomics”? If the answer is no, I present you this webcomic.

By looking at any page of this you will understand that this never was a good concept in first place.

"Syd's World is a series featuring the titular character Syd, his mischievous cat Alfie, his family, his friends, and their acquaintances doing many things in everyday life, including playing billiards, bringing up world events, having bonfires, and more."

This description is the one presented in the Webtoon page of the webcomic, and there is no better way to describe it. Except for two things: first, by how the most of characters talk and act, you will think that this webcomic is about some type of hippie community; and second, that most of the "adolescent" characters are cousins of the protagonist.

If we assume that this webcomic was made for boomers, one of the reasons is for the art style. Definitely it looks ripped off from a cartoon of '70s or '80s, making it look outdated and ugly. The author was hand drawing the art until May 2016, although there is not much difference really between that and the later version. 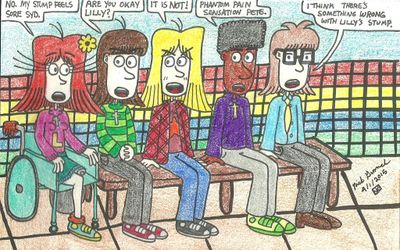 Not only were the drawings still stiff, but the same figure drawings were used over and over again in the same picture, with minor changes for hair and such. For me, the digital format looks like the author drew a pose and later copy-pasted what he need for his next drawing. Example: 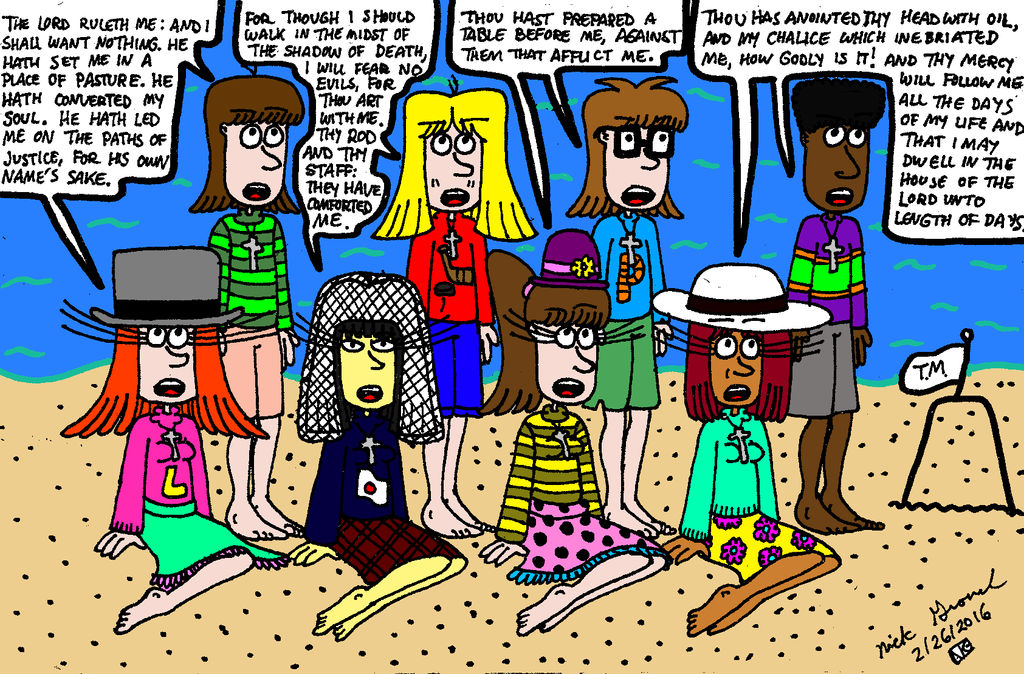 That is the true mark of bad art.

Like emulating that type of cartoon, the objects tend to disappear from one frame to other. Also, the author has a notable fetish for legs/thighs/feet, because he will use the minimum excuse to have the major quantity of characters with shorts pants/skirts and barefoot, like this or this. Even if it is illogical, like this little girl wanting to go barefoot in the snow, and ends up in her tights eaten by the cat.

Oh, and good luck trying to differentiate between them, because almost every single character has long hair and the same face. The only ones easy to recognize are the cat, the father (since he is the only character who has short hair) and these two color characters. Also, the shitty backgrounds and special effects don't help.

Before we talk about what is written, we have to talk about HOW it is written. For starters, in the comic we have two twin sisters who are French and they are apparently the protagonists of another webcomic by the author: Weird Stories from Europe. Well, every time they appear, they speak some machine translated French that sounds like the Chinese Bootleg Star Wars. We take one example this panel.

This is what they are saying:

This is the translation of the author:

Francoise: I miss playing in a band, Michele. We should start our own group. You and I are guitarists so we can change the rhythm and lead depending on the song.
Michele: Francoise, we should form our own group because I want to fulfill our parents' dream to see us play in the same band together. We need to recruit a bassist, a drummer, and a vocalist to get our dream of an all-girl band going once my tenure with the Fedoras is over. Does it sound like a plan?

This is the actual translation of the text:

Françoise: I'm bored (1) playing in a band, Michele. We should start our own group. Thou (2) and I are guitarists so we can change the rhythm and role (3) depending on the song.
Michèle: Françoise, we should form our own group because I want to fulfill our parents' dream to have us play in the same band together. We need to recruit a bassist, a drummer, and a chanter to get our all-girl band (4) dream goes once my mandate with the Fedoras is over. Does it sound like a plan? (5)

(2) Use of singular "vous" instead of "tu" is too formal for sisters.

And this is the more accurate translation of the text:

(Thanks MoebiusStrip for the translate and correction of the dialogue)

And we go on with every panel where the sisters appear. But this problem not only appears in the translation of one idiom to other, the English dialog also unnatural, like this one. Look at this and tell me this is not dialog that will have two cleverbots talking between them. We also have someone talking Japanese, or more like thinking, and almost certainly that also is badly conjugated too. I have the theory that the author is using an automatic translator and pasting the text without checking it, but I have no proof of that.

If you look at the gallery of the author DeviantArt, you will observe that this comic started as a one panel comic, like the majority of the boomer comics, but in January 4, 2021 the author changed the format and put more panels per update. What’s the problem with this? Well, he did it in horizontal format. And he published this version of the webcomic in Webtoons, where obligatorily the format has to be vertical. The result?

Cut off panels, that makes them feel incomplete. I don’t know why the author chooses this webpage to host his comic, but definitely it wasn't the best decision.

First of all, in some way most the events feel like they are happening in a hippie commune. Why? Not only because almost every character has long hair and an apparent hate for long pants and shoes, but also for the things that happen here. Some of these events: The characters replanting trees because orange man left Paris climate accord, they discuss and think about Rush Limbaugh for at least five pages, discussing about George Floyd crime, protesting about climate change (with a reference of Greta Thunberg), etcetera.

And everyone that is not part of their ideology will be demonized and converted into extreme assholes. Some examples are: This two color couple that is extremist Christians that they wish hell for Rush Limbaugh; or this two Fundies that they kick the cast from the beach. But being the principal cast are also annoying combined with the same unnatural dialogue, this emotional blackmail doesn't work.

Nick Granch (gretzelboy89) is US resident born the 5 of December. In almost every account he has it declares himself like a high-functioning autistic, which will explain some of his little dissimulation of his leg/tight/feet fetish in the comic, he even have a Tumblr account dedicated a ‘70s/’80s models with shorts pants/skirts. Since he created his DeviantArt account, he created other two webcomics: Tales of a Working Band (2011-2020) and Weird Stories from Europe (2013-2020), but since has almost the same characters from the principal comic, there’s not much difference.

His favorite subjects to explore in his work are politics, music and religion, among other themes. He confessed in the comments of this panel that he is Catholic, demonstrating it with the description. He’s a supporter of the American Solidarity Party (ASP), a Christian SJW political party that, as what is expected, is Pro-Life. The author also use his webcomic to celebrate or protest certain events, like the International Women's Day or the Asian Lives Matter from March of this year. Good form of protest, by the way, making your characters have the stereotypical yellow skin and that their personality is being loud, angry, ugly and look alike will please the Asiatic-American community.