First of all let us see what Dante thinks Surviving the World (or STW) is:

Basically he's saying it's a comic where he posts his thoughts on anything seven days a week. Anything so long as he can stare with that smug look of satisfaction on his face.

Now, I've highlighted the word "webcomic" because that's what Dante thinks his creation is. It is a fair judgment because there are a few successful and very well done photocomics out there.

The reality though as always is rather different because it is neither a good photo... thing nor a webcomic. It is just a guy taking photographs of himself with whatever he was thinking of that day. There is no variety, no major changes to plot or art, no other characters, no nothing. Its the same every day and it goes on for over 558 fucking days!

To be brutally honest, if you consider "guy standing in front of blackboard" a decent story then I advise you to stop reading this review and go quietly vegetate in front of the television like the sad and uncultured fucking imbeciles you are. 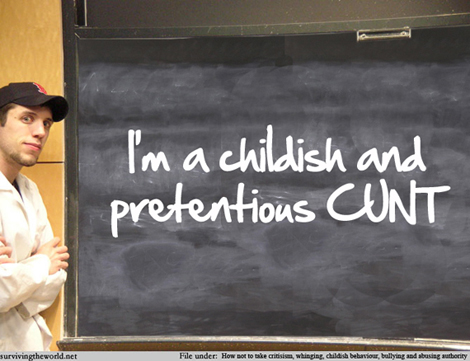 The "art" is fucking abysmal. He takes his own photos using self timer which means half the time the lighting is shit and the blur even shittier. He looks dead yet manages to retain this look of intellectual superiority when he imparts what he considers to be the basic facts of life.

This is the big bone of contention I have with this comic: the idea that someone can take a single photograph of himself standing in front of a blackboard constitutes a serious shake at webcomickry. It isn't. It's lazy, it's pretentious to think that it would win an award and it's outrageous to get wound up whenever someone points this out. When someone does point it out he throws a tantrum.

His main argument supporting his method of taking an often blurred self portrait of himself standing in front of a blackboard is that art is just a medium that cannot be separated from the writing. He states that photography offers a well crafted medium that enhances the reader's experience. So far so good.

However he then says:

After reading this, I had to step back and read through the 558 previous pages all over again. And then I had to go walk around for a bit rubbing my head and then I had a stiff drink.

Dante, sorry, Professor Shepherd, I really hate to be the one to break this to you but your entire 558 frames? They're the same fucking thing. All of them. You're just rehashing a blackboard and the same method of delivery (pointing to smarmy and pretentious bullshit written on said blackboard) covering usually the same subjects.

I've heard fans of STW compare it to Gary Larson and The Far Side. Did I even hear that correctly?! Larson may have been lazy but at least he had the good grace to mix up the settings, backgrounds and characters! At least he didn't bore his audience to death by just sketching a guy standing in the same one or two places pointing at a fucking blackboard!

You see these things go hand in hand. Bad art will bring the writing down and this is fucking shite art. It doesn't matter how good or funny the writing is if it's still presented in the same dull monotonous format then it's still going to be shit.

The writing is basically whatever came into his head or whatever he was asked at the time. All of this presented by someone in a position of authority yet is still super-duper cool because he has a baseball cap and shit. Occasionally it is amusing but never laugh out loud funny and other times it's just inane and cringe-worthy. The whole thing is made worse by the abysmal way that each frame is put together which drags the writing down even further. 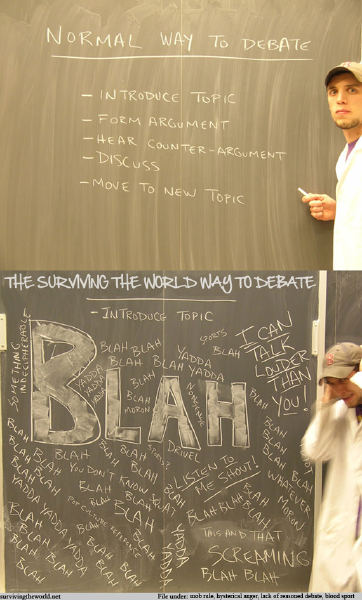 The good Professor Shepherd is a research Professor at the Fred Paulson Institute in Wincheck City, PA. He got a useful degree in Civil Engineering at MIT and then got a not so useful graduates degree in Philosophy at Brown University. It is these skills that seemingly allow him to pontificate with an air of superiority and arrogance not seen since Piro and Largo were still together.

Despite being over the age of thirty and being in a respected academic position he does get angry when people knock his work. For example when a webcomic columnist decides to deride his work as lazy and not a webcomic at all then hell welcome to the STW way of debating. First of all he steps up (see bottom) and says that despite the fact that "the columnist is narrow minded and ridiculous" he's not angry at all but here's the link anyway just so you can check it out!

So he pumped the audience, worked em' up and sent em' out with torches and pitchforks! The 72 hours worth of pure mob rage had begun. Prof Shepherd however sat back for a couple of days and watched as the column burned under the relentless assault of angry fans outraged that someone could possibly have an opposing view. Later, despite the columnist coming out over twitter to apologize and offer an interview, Shepherd came back and with a smug air of satisfaction started quoting sarcastic quips about the article. And then he sits back and says that he had no bearing on what his fans did which shows just how little respect he has for his readers.

This isn't debate, it's little more than pure fucking bullying. It's a childish and frankly disgusting way in which someone in Shepherd's position should not behave.

Dante, this isn't a webcomic; it's fucking lazy. Get over it.

The man has spent the past one and a half years getting by on the whim of a self-timer and a few witty things that came to him that day. Furthermore, any suggestion that this is anything but a webcomic tears at his sensitive soul and thus all reason gets chucked out of the window. In a fit of childish anger he sets his fans upon anyone who disagrees with him and then smugly sits back and insists that he had no part in what they did.

UPDATE: This webcomic has just been concluded with a "Class Dismissed" strip.