I had been following Bleedman's awful webcomics as a source of humor for quite some time, so I did not hesitate to start reading this one when he released it. Sadly, it lacks the punch the other two comics have as a source of hilarity. As one of my friends put it: "At least with the other two you can marvel at how bad the characterization is, or read the comic in Dexter's original voice; this is just boring." Also this comic doesn't include subjects like devastating terrorist attacks that make the author look like an insensitive oaf with no sense of scope or sensitivity for his readers.

Now, it's easy to say "Hey this comic has always sucked, let's just move on" but I like to go the extra mile when it comes to these things. Especially when it comes to Bleedman. Bleedman's comics are always mediocre, but at some point he takes his story and flings it off a cliff. With "Powerpuff Girls: D" it was Dexter attempting to transform his sister into an android after she was killed. In "Grim Tales" it was using the tragedy of 9-11 to further a romance subplot between Death and a little girl. Now what could be the downfall in "Sugar Bits?"

While the downfall of Sugar Bits isn't as bizarre as Powerpuff Girls: D or insulting as Grim Tales, it's one of the greatest mistakes he has made in regards to his writing. There hasn't even been one hundred pages, and through a series of poor choices he has made his story nearly incomprehensible. Where did this begin? Where was the downfall? Right here: Page 68.

At page sixty-eight Bleedman introduces "Evil Ginger". Where does "Evil Ginger" come from? Why does she attack Gene and Hansel. Why are they attacked by rabbits? What's the deal with this dream catcher jackoff? What the FUCK IS HAPPENING? Welp. From page sixty-eight and onward you, poor reader, will not get any answers, and that's why this comic suffers so direly. To add insult to injury, Bleedman introduces "Little Red Riding Hood" a cameo (Bleedman, putting a CAMEO in his comic? Nooooo) from another SNAFU comic Ever After. Well, it's better than Cartoon Network...I guess.

At less than one hundred pages there hasn't been much time to introduce much of a plot, and indeed, there is very little of it. Anyway, let me spare you the "joy" of reading this comic, and try to explain it to you to the best of my ability. There is a realm called "Harmonia" that contains several floating islands, that further contain kingdoms known such as "Toytropolis", "Lovinia", and Courage Campus (Stop me if I'm going too fast for you). This particular story begins in Confectionaria, the land of sweets, because truly things like candy are super important to the happiness of humanity and aren't the leading cause of diabetes, tooth decay, and obesity. I digress.

The story opens in Confectionaria where our characters are extracting a super important element known as "Zest". This element is so super duper important that it's never mentioned again. The zest machine overloads, a monster is created, defeated, blah blah blah, let's move on.

Within a few pages both Cupcake the Rabbit and Ginger the Princess are introduced. Cupcake is completely unimportant and hardly shows up again, but Ginger actually means something to the "plot". Through some word vomit we find out that Ginger created Hansel with her mom's love. Until big bad Bleedman Bleedheart took her mom away. So Ginger is like a mom to Hansel, but there is this weird romantic subplot thing going on too? Let me just stop and say Bleedman what the FUCK is with you and incest? I guess they aren't technically related but hell, related enough. Is it better or worse that it's a cookie? Why do I even have to ask myself this? Why do bad writers always shoe horn in terrible romantic subplots as soon as two eligible characters make an appearance?

I'm sorry, I went on a tangent.

GOD DAMMIT NOW THE LAMBCHOP AND THE COOKIE ARE AT IT. 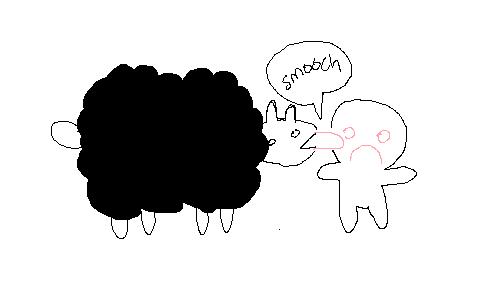 Sorry. From now on I'll just sit back and imagine that the only reason that they are kissing him is because they like the taste of gingerbread.

Moving on. Bo and Hansel meet in the Dream Palace and soon it becomes a shared nightmare as they are attacked by EVIL GINGER. They escape, but the real Ginger escapes into the night. The Brave Hearts get together to discuss the disturbance in the dream world, and then it's off to Confectionaria where a portal is discovered in the kitchen.

Hansel finds himself in a dark world where everyone is big, evil, and wears fancy business suits. We are eventually introduced to a Tails Prower ripoff who tries to kill not one but two sets of characters with her giant fucking shark boat and really isn't useful or interesting aside from that. We also meet "Mammon" er "Gene" a disinterested devil who introduces us to the worst naming conventions I have ever read.

Directly after this point, the story smacks face first into one of the worst plot fuckups I have ever seen. I will discuss it further in my writing portion of the review. Suffice it to say, Bleedman really dropped the ball with this one.

There isn't much for me to say that I didn't say in my Powerpuff Girls: D review, with a few minor differences. This time I don't have to worry about Bleedman bastardizing copyrighted characters, no, this is a Bleedman original. Still, it suffers from most of the problems his other character designs have. His girls tend to look like they were built from a template, the same little stick bodies over and over again. The guys are also huge monstrosities, with the exception of "Gene" the devil, who I actually enjoy looking at, even if his personality is about as flat as everyone else in the story. (Oh and one more thing, Bleedman STOP pushing Gene's horns to the back of his head, it looks stupid and horns would NEVER go there.)

Bleedman constantly tries to improve on his coloring, but I don't think he really knows which direction he wants to go. So it looks slapdash. He enjoys using bright, eye searing colors, but he is trying to work in a dark landscape. So it ends up with him mixing eye-searing colors in a dark landscape. It doesn't work. He needs to design a template, then stick with it. It would also help if he didn't fully render everything. Look how bright it is on the characters armor plates on panel one when it's so dark outside. If it's that dark outside, there would never be any highlights like that on a character. Additionally, Bleedman shouldn't worry about rendering everything to that degree anyway, sequential art is about the big picture, not every individual panel.

Actually, I'll give Bleedman some credit with this work, I think he really did attempt to develop an original world for his story. There is evidence in his Deviantart gallery that he has been working on this idea for a while, and there are moments where the concepts shine, however brief, but in many cases the art and designs feel rushed, as if he was so desperate to get his ideas out there to the public it killed his pacing.

Again, this is where Bleedman falls, and falls hard. I do believe that Bleedman really cares a lot for this project, but all the care in the world won't make up for shoddy writing. This whole thing feels like he wrote it as he went without writing a plot outline or script in advance. As a comic artist, if you intend to tell a large story, you have to write it out in advance first, I cannot over emphasize this. It's likely that Bleedman had it planned out in his mind, but envisioning something isn't enough, because that's like drawing something without sketching it first. Everything gets crammed into a corner, and that's exactly what happened to the story.

First and foremost, we are given brief introductions to the characters, and very little time to get to know them as people. Just as we start to get to know them BOOM, we are hit with some exposition and back story. Just as we are reeling from that, BAM, here comes some conflict. The pacing in this story is atrocious. While it holds up to itself for a little while, things completely tumble and fall when page sixty eight, evil Ginger is introduced. Why? Because after that, there is conflict, after conflict, after conflict, and zero motivation. As readers we are barely hanging onto these characters anyway, but then the story keeps asking reasons for us to care.

It's not uncommon for a story to suspend our sense of disbelief, or to make us hang in for a mystery, but the reason these stories can be great is because they have great characters to back them up. We stay through the confusion because we want to witness what happens to these characters. In Sugar Bits, I can't honestly say I gave much of a shit to what happened to anyone, and the more confusing things got, the less I really wanted to see what happened. Bleedman is asking far too much, and giving too little.

Because I'm low on space, I'm not going to put anything here this time. Just check out my previous review if you want to read about Bleedman and his exploits. Really, it's a doozy.

As much as I want to tell Bleedman to fuck off for expressing a desire to tell an original story, I can't. Anyone who is interested in becoming a sequential artist probably has a story or two in mind, the problem is, not everyone has the patience to sit down and create it. They want to spit it out and have the love flow in from their creation immediately. Let me tell you, from creating several near starts in comics, it's not about having the love flow in, and doing it right is much more important than doing it right now. If you love your idea, then you should give it the time it deserves to make it good.

I could be in the wrong though, and it's very likely that while Bleedman has passion for his creation, he has never taken the time to learn how to tell a proper story. He is surrounded by fanboys and suckups. He's the most popular guy on DeviantART, so it's likely all this advice will fall on deaf ears. He's at the end of the rainbow, and at the end of it is a big pile of mediocrity.