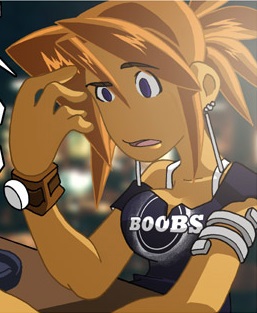 Women in this comic in a nutshell.

Somewhere between the rampant sexual humor bordering on nympho-maniacal that has become so familiar since Least I Could Do and the thankfully deceased Shredded Moose, there lies Sticky Floors. A webcomic that has been running on Snafu-Comics.com (a place for awful comics to thrive) since mid-2006, written and drawn by Matt Herms, with occasional strips written by Karen Emch.

How I managed to come across this webcomic, I don’t know. What I do know is the only thing that sets it apart from every other comic on Snafu (right on down to the faux-manga art style) is the way it takes the notion of subtlety (not to mention class; it’s a webcomic called STICKY FLOORS after all), sets it on fire, pounds shards of broken plate glass into its face, douses the open wounds with salt and lemon juice and then covers it with a heaping mound of sex jokes.

Sticky Floors follows the Wacky Escapades® of Wesley & Colin, college-aged roommates (Natch) whose day-to-day lives always seem to be nothing more than build-up to wild sexual encounters. Sometimes they’re at a bar, sometimes they’re working dead-end jobs, sometimes they’re at a supermarket, but in the end it all leads back to intercourse, one way or another. There’s never a situation they’re in that isn't eventually tied to knocking boots.

There are 3 other characters who make plenty of appearances too, but in the end the primary focus is on Wesley and Colin so I won't bother with talking about them.

If the fact that it’s a webcomic called STICKY FLOORS isn't enough for you, it still comes as early as the first comic, which depicts main character Wesley wearing a shirt, advertising that he has herpes… and he’s proud of it.

Tucker Max would call that a bit much. 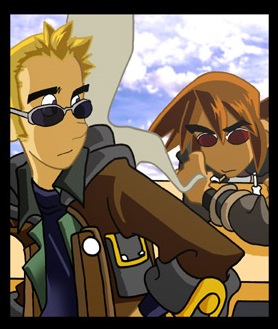 More and more it seems as though Snafu will only host a comic if it adheres to one of two different art styles: Anime Fanwankery, or Faux-Anime Cartoonishness in the style of Scott Pilgrim. In the long run there’s nothing necessarily WRONG with using that as a style of art, it’s not even to say that it looks bad, but it certainly doesn't help your comic to stand out on a website filled with comics that use the exact same style.

The backgrounds on the other hand might as well not exist. Our dear Matt Herms seems to follow the Ctrl+Alt+Del school of learning when it comes to backgrounds, (IE: Take a photo and blur the crap out of it.) and takes it many steps further. Remove the stools and beer from this comic strip here. Would you still be able to tell they’re in a bar? Ditto this strip. Believe it or not this takes place in a fast food joint. And this “supermarket”. It doesn’t get much better over time. Taken out of context, where do you suppose THIS is meant to be taking place? A warehouse? A castle? A room full of grey bricks? Beats me.

One last complaint that I have, which may seem minor to some, but I just can’t get over it: throughout the strip, Herms just can’t seem to figure out what to do about NOSES. What do I mean by this? He can’t figure out whether he wants his characters to have them or not. To say it’s a specific style is giving a comic this immature too much credit. I get that it’s part of the whole chibi art style thing to get rid of it for those shots, but for every damn shot?? Make up your mind.

Ditto for lips, too.

Hoo boy. Where to start??

Remember what I was saying earlier about how the comic was introduced on an image of guy proudly advertising his herpes on his shirt? That was supposed to be one of the tamer jokes.

It only gets worse from there.

None of this is helped by the fact that the main character Wesley is an ungodly prick of a Mary Sue. Here is a man that by all accounts should have been arrested for sexual assault long ago, but somehow he always manages to get revenge, get away with being a douchebag, get away with indecent exposure, and get all the bitches. I guess the intention was for him to be seen as the precociously lovable little man-child character that inhabits so many other webcomics, but you can put all the Santa hats you want on an annoying asshole, and it’ll still be an annoying asshole.

Wesley is of course in direct contrast to the boring straight man, his friend/roommate Colin, who is a flake with really bad luck. And that’s literally all that can be said about him. A one-note wingman. A character whose sole existence is to make the Mary Sue look cooler. Just what does it say about a character (who is intended to be the MAIN character, incidentally, despite giving the craa-aa-aa-zy friend more panel-time) when they make Lucas from Ctrl+Alt+Del seem less spineless?

Other characters include two female love interests. One a psycho-sexual deviant, (paired up with Colin, ironically) and one a stereotypical man-hating tomboy that Wesley keeps trying to mack on. Yup. They’re both one-note too. And so realistically portrayed, too!

And there’s a black guy named Token, whose name is a joke that would be perfectly funny if South Park hadn’t clearly done it first. [ No, there’s nothing interesting about him either]. He’s pretty much just a black guy. In case you forget though, the comic is quick to remind you of said blackness.

But even one-note characters such as these can be saved by funny jokes… too bad as the previous links demonstrate there aren't any. The few times that punchlines aren't carried by amusing(?) references to copulation, it takes an occasional VG Cats-like route of geek humor peppered with vulgarity and violence for its own sake. Of course even then it can’t escape the sex jokes.

This isn't to say that jokes about coitus can’t occasionally be funny. But I emphasize the term OCCASIONALLY here. You’ll be hard-pressed to find a strip in the whole archive whose punchline doesn't pretty much amount to “SEX! HAW HAW HAW!!” Hell, even Least I Could Do wrote about OTHER things occasionally. It goes without saying that it’s every bit as misogynistic as Least & Shredded Moose as well.

The previous few comics weren't enough of a give-away for you? Check out Herms’ Snafu guest comics. And after a while it starts to enter some REALLY disturbing territory. What kind of sick mind dreams up this? Or THIS? OH JESUS, WHAT THE HELL IS BEING IMPLIED HERE?! Joking about how completely perverse something is doesn't change the fact that you found it funny in the first place, Matt! You may have been gracious enough not to actually SHOW this to us, but there’s still something seriously wrong with you. 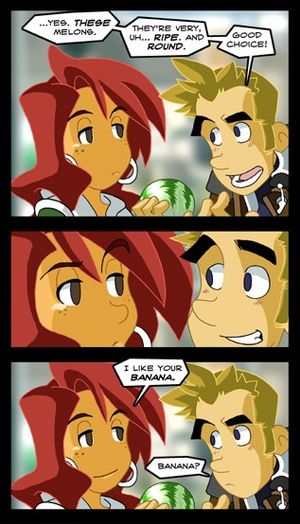 There’s not much to say here about Matt Herms himself, because I personally couldn't find anything about him anywhere. Nary a bio of sorts. What I DID manage to find out is apparently he’s in the middle of a divorce… with longtime writing partner Karen Emch.

I guess it would explain why his comic has been on hiatus since April of 2009, and while I hate to judge other people’s personal lives, it wouldn't surprise me if the divorce colors the content of his later comics… Assuming he ever updates again.

Oh, and he’s not Bleedman.

Even leaving out the horrific amount of jokes about dicks-up-asses, Sticky Floors is still a pretty bad webcomic. The art is passable, but the terribly written characters that spout its equally degenerate jokes deliver the killing blow.

I shudder to think about just what sort of audience this webcomic would appeal to. Perhaps the class of people likely to appear on To Catch A Predator someday.

UPDATE: This webcomic is dead and gone. I guess this webcomic became too much even for SNAFU.