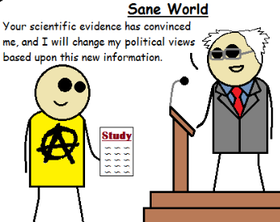 DeviantArt, the Internet's largest art hosting site, over the years has grown into quite the farm field of problems. There's the overabundance of disconcerting fetish artworks, the bases, the just plain juvenile artists, the increase in social media-like elements, such as status updates, the diminishing, increasingly negligent staff, and of course, a certain the mess known as Core Membership.

But in my time on the site, I've seen another problem creeping along the sidelines, of members who are just there to recruit others to their political views. These people either do nothing but talk and never submit anything, submit nothing but memes, or will submit propaganda art, more often than not with the least skill as possible, as this webcomic will demonstrate.

Naturally, this webcomic was always bad, beginning simply as Anarchist just standing around while beating Statist in debates. It looked like it might get slightly better as more props and characters got introduced. But then the webcomic's art reached a downfall of sorts when it began introducing heavy amounts of copypasta alongside its stick figures.

At first glance, this would appear to be a gag a day strip, as the rock bottom art style and political agenda would lend itself to. Indeed it does start out as a gag a day strip, but then surprising amounts of ongoing story and continuity start to creep in. The first ongoing arc starts with Anarchist trying to explain the evils of minimum wage to Statist. Anarchist decides his time is too precious and walks off to let a character from Rick and Morty to fight his battle, only for Statist to inadvertedly get killed. This leaves the now saddened Anarchist to lament not having a dimwit sidekick to feel superior over.

Such gripping drama isn't it?

Anarchist holds an audition for a new lesser half, which is where "Red Statist" who represents Authoritan Republicans, is introduced in all his fat, jingoistic, farting glory. Anarchist still misses the original (forever more known as "Blue") Statist however, and after failed attempts at cloning and necromancy, finally resurrects Blue Statist through prayer to God.....yes, really. After Blue Statist recollects his brief time at the Pearly Gates and Hell, the arc just flops down and dies in favor for more gag-a-day strips covering the 2016 election.

The next big arc follows a painfully long winded video recording from 1993, where new character Classic Liberal rants on and on about events in his time and how he thinks everything will be changing for the better via technology and social progress. He cryogenically freezes himself so he'll skip ahead to 2030, but an accident causes him to awake in 2016, where he's horrified by the politics of today. Despite Anarchist's "best" efforts to talk him out of it, Classic Liberal commits suicide and lands in Hell. After this surprisingly dismal turn of events (wasn't this supposed to be a funny strip!?), we're treated with a "fascinating" set of flashbacks with more of Classic Liberal's life growing up, and a lengthy talk with the Devil. This all leads to Classic Liberal coming back from the dead as...Sovereign Citizen, here to purge the land of people the author dislikes, with an army of the undead at his back!... 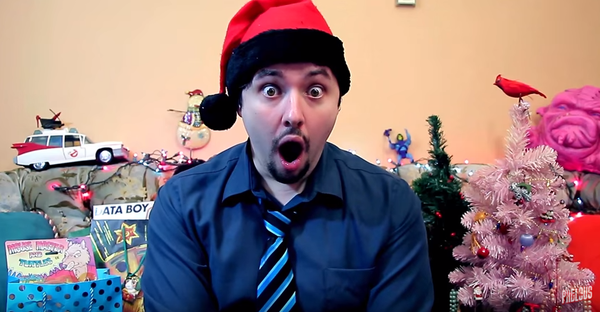 ...Then this is immediately dropped for more gag-a-day strips.

Long story short, there is an off-and-on plot, but it can all be accurately summed up as random childish idiocy and boring rants to prop up the author's petty little political crusade against the cold cruel world.

UPDATE: The story is back up and running, and it's just as droning as it was before. Maybe even more so than last we saw it. I give it until the 200th strip when the artist finally gives up and just blows up the world. Then one strip later retcons everything that happened before and goes back to being a gag-a-day strip. Emphasis on gag.

It would be simplicity itself to just completely dismiss this webcomic as a no-effort hunk of junk. But to give credit where credit is due, the author does care enough to improve the strip's art very slightly. For instance, he could've just left all his characters as bald stick men differentiated only by their shirts. But he later on adds hair, hats or accessories to the characters, and let’s face it, that's the best anyone can do with stick figures. Even Order of the Stick, universally regarded as the very best stick figure webcomic on the Internet, just uses the same bland face, varied only by hair, clothes and props. So the stick figures themselves pass, even with those big solid black lines of theirs....There's even a few times where the author bothered to draw simple yet effective backgrounds, like with the graveyard scene. In that way, Statist and Anarchist even surpasses Cyanide and Happiness, the strip BlameThe1st takes inspiration from. 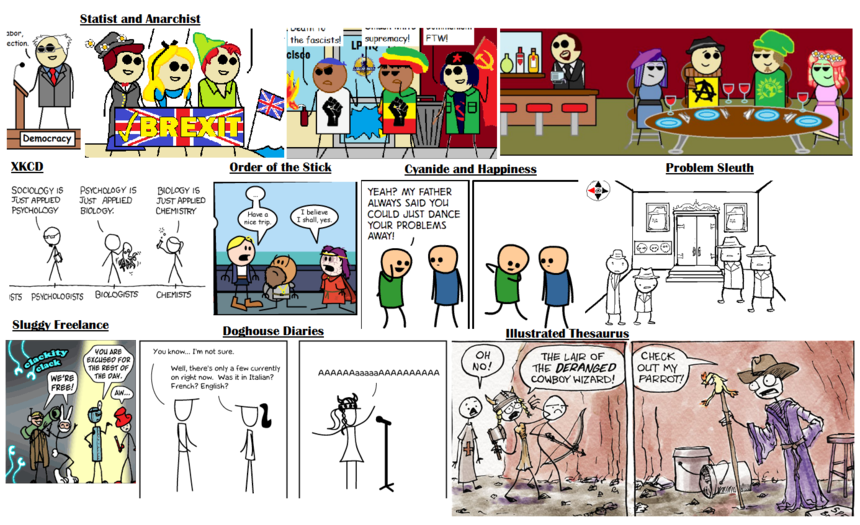 Satist and Anarchist's stickfigures compared to the stickfigures of other comics. They are actually not the worst aspect of this comic

I can't believe I'm saying this, but Statist and Anarchist could actually make for an alright stickfigure comic....if it were not for the stupid ass meme faces the author habitually slaps on for "humor". God dammit, those faces get so incredibly tiresome when he starts using them in strip after strip after strip. Yet it gets considerably worse when he starts putting in more copypasta, such as a photo of Donald Trump's face on a stick figure body, or Regular Show characters getting slapped in, or even a full background taken straight out of We Bare Bears! This is a gigantic affront to any kind of comic regardless of medium or genre!

What the so-called artist does when he's not doing stickfigures

This webcomic is already at bad from the start, being about political stereotypes. The Green party is a dumb lazy pot smoking hippie who wants stuff in life to be free. Red Statist is a bigoted, illiterate, war mongering, gun toting, tractor riding, Confederate Flag waving red neck that blindly follows Trump's every word. And Blue Statist blindly follows liberal media and politics, hates rich people and wants more government institutions, regulations and things banned, while throwing the occasional riot. Now, stereotype based characters don't always need to be inherently negative. Take for instance, Humon's Scandinavia And The World comics. Most of the characters hold a balance between cute likeable moments and jerk antics. Its not trying to prod the audience into any one view either. 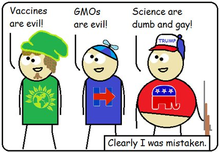 Yet another beautiful tapestry of deep interesting characterization from BlameThe1st

Statist and Anarchist has no such practice going for it as its just Anarchist, and later Classic Liberal, as the lone, always correct sane man amongst a world of increasingly wacky idiots. He's not even trying to make the opposing arguments the least bit realistic. Like having Red Statist's reasons for fearing Mexican immigrants being the Spanish language, and Mexican food? I'm Democrat and even I can think of better reasons, like there not being suitable jobs and resources to support a sudden population influx. Or there are gems such as this Alt Right stating that his own personal bigotry took over his reasoning. Or Blue Statist outright admitting that he only recognizes things as facts when they agree with his views....This is Vegan Artbook levels of Strawman here! The author isn't even denying it, with his excuse being "well all the other political cartoons do it".

What makes this worse is, that the more that’s revealed about Anarchist (he's actually Libertarian, college educated, lives in San Francisco, is a brony, etc.) the more I'm convinced he's not only a mouthpiece for the author, but an actual self insert as well. The new character Classic Liberal has this problem as well, with lots of strips about his childhood and being inspired for the future after visiting Disney's Epcot center (BlameThe1st has a well stated love for all things Disney).

To his credit, the author at least appears knowledgeable is some of the things he talks about, like his making a list of atrocious wastes of tax dollars. Or his having read a lot more literary works than just Ayn Rand's Atlas Shrugged. But then there's instances where he's either ignorant, or twisting facts to better suit his Libertarian ideology. Everyone is likely to have their own different ideas on what the author did and did not get wrong. But an example that stood out to me was when he tried to equate Leftist autocracy with feudalism. No, that's simply incorrect, since Feudalism is actually about numerous social classes theoretically depending on one another, and there's been several instances of feudalism where the central monarch was a powerless figurehead. Not to mention the fact that even the webcomic admits there would be a term limit so calling it a "dictatorship" would be moot. 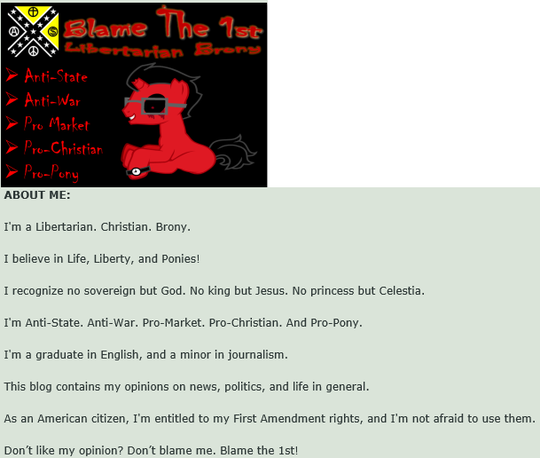 ooh, look at that dark and edgy ponysona. Surely this is a man who's all serious business

BlameThe1st -no other name has been revealed for this man- is a Christian conservative Libertarian Brony in love with Free Market Capitalism and Disney. He's been on the Internet for several years with blogs and a youtube channel, almost entirely to promote his brand of Libertarianism. BlameThe1st follows the funny pattern of many DA politics members I've seen of having childish looking interests while at the same time acting painfully superior to everybody who doesn't contribute to an echo chamber in his favor. Look, I admit to being a grown man who watches kids shows, but I don't run up and down the Internet screaming "haha I'm smarter than you" at the top of my lungs, which is essentially all this comic amounts to.

Indeed most of his Internet career has painted him as a spoiled man child. Earlier on, before starting Statist and Anarchist, he expressed distress over getting burned by libtards and hatetheists, with stamps and rants. He hated people misrepresenting and stereotyping him, and so his idea of a proper response....was to misrepresent and stereotype everyone else. He'll write a comic of almost identical wording to another comic he hates, to try and discredit it and pretend he's better somehow. He's demonstrated child-like insecurity from quickly shouting down every work that spoke ill of him, to joining DA just to counter the activity of one individual he didn't like. BlameThe1st's insufferable arrogance has gained him a reputation for being an exceptionally obtuse debater on DA.

I wish I could be fair and say that this webcomic wasn't an entire waste. I wish I could say this webcomic had some kind of comedic potential if he dropped all the copypasta and the god damn stuck-up soapboxing. If he could do more story arcs that weren't titanic sized rants about his old hopes for humanity. If he could do more generalist, not quite so childish humor (i.e. lose the cartoon cameos) like the Blue and Red Statists suddenly getting along while under the influence of marijuana pie. Or the outbreak of a zombie swarm, or Red Statist trying to make a bathtub into a whirlpool using a blender.

But no, I've already been more generous than anyone else is gonna be with my analysis of this webcomic. BlameThe1st is never going to change this utter heap of excrement dynamically enough to make it readable...except as an example of what not to do if you have any interests in appearing as a kind, mature rational human being. Avoid the political talks on DeviantArt as much as you can. Avoid the types like BlameThe1st. Ye be warned.

UPDATE: Everything is gone from the internet.