In the distant future, humanity is divided into two races! They are constantly warring with each other for dominance of space. The two races of which I speak are gay rapists, and gay rape victims.

Okay, giggles aside, in Starfighter, the human race is losing a war with some unseen/unexplained threat called the Colterons. The human military is broken down into two groups: navigators and fighters. There is one navigator and one fighter per ship.

Navigators are supposed to be the smart ones who pilot the ships. They also are all waify, tiny, oversensitive, girly uke boys. Navigators are also perceived as the “better” of the two groups of military homos for some contrived reason. They're too precious and beautiful to socialize with their military partners, yet it is mandatory for them to dorm and work together constantly. (By the way, every single dorm has two double beds and a private bathroom 'cause, we all know, that's how military barracks roll.)

Fighters are the ones who operate the guns on the ships. However, when looking at the design of the ships, the turrets cannot pivot/move/whatever, so a fighter's job is basically to press a "fire missle" button, yet it apparently takes such advanced skill to do this. And apparently, the fire-da-missile button looks like this: 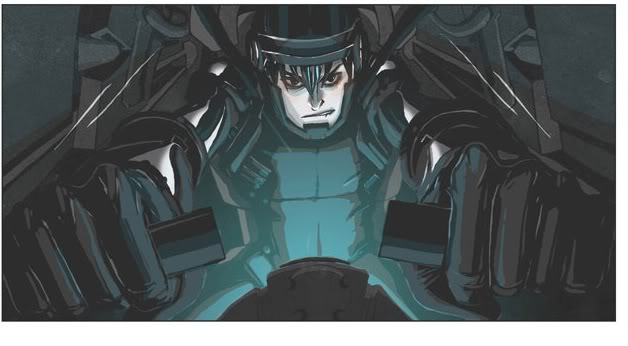 Which is not only a rip-off of 80 different flavors of Anime giant robot set-ups, but completely nonsensical for its purpose.

Tossing the mechanics aside, fighters are supposed to be big, mean, manly guys who spend their free time throwing their arms in the air, hooting over violence and sexually assaulting each other. Despite their supposed punch-through-a-brick-wall masculinity, most of them are, of course, skinny bishonen boys with weak chins and no facial/body hair. One of the main fighter characters is exceptionally feminine as well because you cannot possibly masturbate if there is any real testosterone within a 50 mile radius. The only difference between the navigators and fighters is the hair color. YES, navigators are little white-haired angles, and fighters are wild, black haired stallions. No lazy styling going on here at all. OH! And women can't be in the military 'cause that's just fucking retarded. Why even bring it up?

So teeny-tiny navigator Abel, and mean old fighter Cain get biblical code names and paired up together and this story ensues.

Probably when on the second page, you see written-out verbs in the comic such as "hurries", "walk", "shove", "grab", etc. Isn't the first rule of comic-making that you're supposed to show the action, not write it out? FOR SHAME!

Let me sum it up:

That's where we leave off.

Good Part: It's competent, sure. She has a good understanding of basic anatomy, can pull of dynamic angles, and she expresses action well. The comic-making is actually pretty good.

Now let's get to the fun stuff!

Bad Part: Sure, she can draw the average male body type well, but that's ALL she draws, and every character also has the exact same chin. While she does well with that anatomy, she is unaware of where the butt hole is and puts it pretty much where the vagina should be, what I like to call the ballgina. Her style is pretty much animu with rounder butts; nothing to envy. 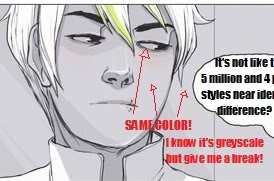 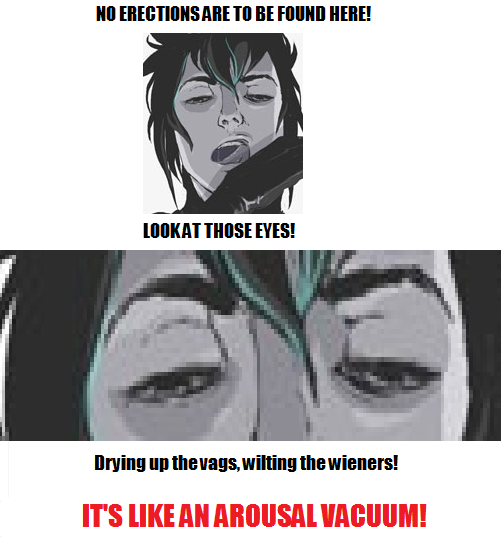 Overall: confusing, stupid, and ingratiating to the yaoi fandom. She puts little to no effort into the writing. Don't believe me? Have a quote from the author!

That's right! Giving your characters names is the insight of a fucking GENIUS according to our Shakespeare-loving comic artist.

As you would expect, the story is pretty much Yaoi from start to finish with no real break from the mold. Can't put the butt hole in the right spot; after two seconds of kissing, they both have boners; it doesn't hurt to be fucked in the ass without lubricant during your first try; rigidly defined submissive and dominant sex roles with no deviation; and men can't have any form of body hair even if it's just leg or armpit hair. The sex scene constitutes more pages than the space-battle where they save somebody's life. Dramatic structure? What's that? For more writing complaints, visit my character section below!

Cain aka "a bootiful example of Russian culture

I can't tell you how personally enraged I am by the character Cain. Now, he is not portrayed as a perfect good guy, but the artist herself has said that he's an "enjoyable character", and occasionally does things to make you feel some kind of attachment to him. For instance: making puppy eyes after being slapped for being a cunt, or a content look on his face after achieving orgasm (even a genocidal dictator looks content then). And even if he is kind of a bad guy now, he's going to end up more and more sympathetic, no doubts about that.

And how about our bottom/uke/cry-factory? Abel was furious with Cain for telling him to learn his place, yet after the following lines of dialog... “Heh, you've got some fight in you, that's good.” “You think this is all a joke? Do you really get off on death and destruction?” “I thought navigators were supposed to be smart... OH ABEL I'M GOING TO FUCK YOU!” Then after some smooching, Abel wants him to p-p-p-put it in. How does that make sense?! Abel can't be so stupid as to be unable to identify a sexually opportunistic/domestic abuser because he graduated at the top of his class. Who COULDN'T identify him after, “Everybody now knows you belong to me” and, “LEARN YOUR PLACE!” Abel isn't supposed to have such low self esteem that he thinks he deserves this abuse because he was confident in his abilities in the space-battle, and because he stood up for himself when Gossipy McGee was telling him everybody knows Cain got him teenage pregnant. In fact, he also stood up for Cain during that argument which makes NO FUCKING SENSE since the only kind thing Cain has done for Abel is blow him, which was a clear way to manipulate him. And it BAFFLES ME that somebody who's supposed to be smart doesn't recognize any of the above. Basically, his character traits are inconsistent. "Oh, but he wanted dick so bad! He's in his early twenties, so how could he have waited so long!" Listen cocksucker, 21/22/23, whatever Weepy Ukerson's age is not LATE for losing virginity, epically gay virginity in a homophobic world. No matter HOW BAD you want somebody to sleep with you, you would think twice about hopping into bed with a man who insulted, threatened, and physically/sexually assaulted you despite your protests. "But Abel is gay, if a guy likes dick, he can't possibly say no to a wiener in the mouth." BACK THE FUCK UP! Can straight women be raped? YEAH, I SAW SOMETHING ABOUT THAT ONCE! So Abel could absolutely be raped/sexually used no matter how much he loves having balls in his face. Grow a fucking brain.

Deimos aka "who cares"

This is the effeminate fighter I mentioned before. Despite being effeminate, he's supposed to be a bad-ass. Sure, I can dig that! However, he nearly cut a guy's balls off for propositioning him for sex, yet he's madly in love with Cain to the point that he won't defend himself if Cain tries to kick the shit out of him? Somebody please point out one good characteristic Cain has which would cause these effeminate bitches to trip over themselves weeping for a lick of his hairless asshole? Please, I'll listen to anything! CHRIST!

Let me first say that, admittedly, she is kind to her fans and supportive of the overall art community. That's good stuff!

Most of the people who write to her are tripping over themselves, apologizing about how THEY ARE NOT WORTHY to look upon doodled dicks.

A lot of them claim they ARE IN LOVE WITH CAIN! How healthy! Interestingly, many of them are Russian and yet THANK HER for making Cain Russian. "Yes, thanks for making your hairless psycho Russian. I am honored to have a man who belittles/threatens/beats/and sexually menaces other men as a representation of my culture. SO ACCURATE!"

Also, a few of them are straight-up creepy. She's apparently flattered by all of the following: desperate letters from people wanting to dump their current significant other to date her (even if they haven't spoken to her before), requests to drink her blood, and one charming young lady who said they wandered around her home city blurting out “HamletMachine!” in a desperate hope that they would find her. Yeeeeeeeeah... While some fans rightly know that Cain is supposed to be a bad guy, many of them draw Cain and Abel together in loving tender embraces, because Cain only batters 'cause he's too shy to say, “I like you, will you go out with me?”

Sure, if you like science fiction and gay erotica, this comic is for you. But if you have any respect for men, homosexuality, consensual love-making, good writing, sensible characterization, or even like dudes who don't all have the same chin, then stay THE FUCK away.